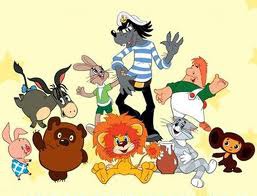 When asked about childhood, most people would probably have a couple of things that remind them the most about being a child. Whether it’s the fun games, holiday activities, or favorite toys. Another thing that cannot be separated from childhood is watching cartoons! Don’t you agree?

Who doesn’t love cartoons? They’re a timeless classic for both children and adults—light, funny, and entertaining. Aside from some must-watch movies, Russia also has a lot of cartoons. In fact, Russian animation has also been thriving since the early 1900s! At that time, a lot of cartoons were made to depict Russian history. Even until now, many of these cartoons are still highly popular among people of all ages. Here are 6 most favorite Russian cartoons for all ages from then and now.

You might be familiar with Winnie the Pooh, now meet Vinni Pukh, the Russian version of Winnie the Pooh! Set in a two-dimensional world, this cartoon follows the daily life of Vinni, a plump brown bear with dark eyes, along with colorful view and enjoyable songs along the way. Vinni’s personality is described as kind of rough, but he can be poetic and even cunning at times! This cartoon was first released in 1969 and directed by Fyodor Khitruk. Vinni is presently known as the only version of Winnie the Pooh in Russia.

Gena the Crocodile is another timeless cartoon that’s not only famous in its home country Russia, but also all over the world! The widely adored character over decades is actually, Cheburashka, the furry, brown cartoon character, who has become Russia’s equivalent of Mickey Mouse. Created from the imagination of Eduard Uspensky in 1965, Gena the Crocodile tells the story of the friendship of Cheburashka, known for its oversized head and round ears, and a kind crocodile named Gena. First, it only appeared in 1 book and 4 films, however it is now an international icon and has made appearances in many spin-offs and motion pictures! It’s also regularly broadcasted on TV channels. All over Russia, you can see this cartoon character appearing in souvenirs such as Matryoshka dolls as well, thanks to its cute adorable appearance.

Everybody needs light-hearted comic relief cartoons every once in a while. That’s why ‘Well, Just You Wait! (or Nu, pogodi! in Russian)’ is a very popular cartoon since the Soviet times up until 2012. It follows the day-to-day chase of Wolf trying to catch Hare. This cartoon barely has dialogs and most of the storyline is explained in picture or simple interjections (you might be familiar with this kind of cartoon from Tom and Jerry). Its simple plot and funny nature make it entertaining for both kids and adults.

It’s no secret that one of Russia’s strength lies in its sports teams. Russians love sports, and there are many popular sports in Russia today. No wonder Russian cartoon are also inspired from the sports lifestyle of Russian people, like this one, Shaybu! Shaybu!, which literally means ‘Give me the puck’. If you’re a fan of hockey game, you must be familiar with this phrase. More specifically, this cartoon directed by Boris Dёzhkina is about the adventure of a young boy who gets his chance to pursue his dream to be a hockey player, and the challenges he faces as he goes. This cartoon actually almost has no dialog, so if you haven’t mastered Russian yet, you can still enjoy it without getting confused about the storyline!

The previous cartoons we’ve discussed are loved for their comical, light-hearted storyline that entertains both children and adults. Now, meet ‘The Mystery of the Third Planet’, a famous Russian cartoon adapted from a short novel with a different title, ‘Alice’s Travel’. From the title, you might guess that this cartoon has a deeper plot than the cartoons we’ve discussed earlier, and you’re right! Created in the Soviet times from the story by Kir Bulychov, this cartoon released in 1981 is about Alisa, a girl who lives in a robotic communist future, and ventures outside of planet Earth on a starship to find many mysteries and bizarre creatures along the way. This cartoon has a complex plot which might entertain adults, however children can still love this one because of the dazzling animation and futuristic setting!

Created by the same creative mind behind Gena the Crocodile, this cartoon was first released in 1978. It tells about the journey of three different characters, a serious mature boy called ‘Uncle’ Fyodor, his talking cat, and an amiable dog. Together, they ran away from Uncle Fyodor’s house and explore the countryside after Uncle Fyodor’s parents forbid him from keeping his talking cat. No worries, this cartoon ends happily, but it’s still an entertaining watch with  well-drawn animation!

Fast-forward to the present time, Masha and the Bear is a recently-released cartoon since year 2009 created by Oleg Kuzovkov. Although it’s the youngest compared to other more classic cartoons that have been around for decades, Masha and the Bear has gained worldwide success too! It is actually inspired from a Russian children folktale with the same name. Each episode has a short duration of only about 6 minutes so it suits children who don’t sit still for long. It tells about the daily adventures of Masha, a smart yet mischiveous Russian girl, who befriends a Bear in the forest where she lives. The cartoon revolves around their daily life where the audience is entertained by Masha’s daily mischiefs and fun.

Those are just a few examples, 6 most favorite Russian cartoons for all ages from then and now, that can be enjoyed by both children and adults. Russian animation has gained a lot of improvement since the Soviet ages until now. Cartoons used to be drawn in two-dimension and even stop motion, but now the animation is more lively and compelling for audiences of all ages to enjoy. Also, it’s a great way to learn Russian culture and language without trying too hard!