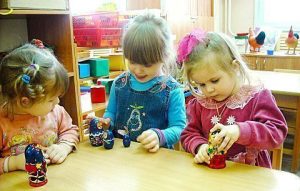 Russia is a country that have many tourist attractions. You can visit amazing places during winter in Russia. If you have ever visited Russia, especially Moscow, you will find souvenirs of dolls with beautiful and chubby pictures. Especially in the Old Arbat area, a Russian culinary and souvenir spot. Matryoshka is the name of this doll. In every Matryoshka there are other smaller dolls, no wonder many people call them tier dolls.

A matryoshka doll becomes a souvenir icon for the Russian State. The name “matryoshka” (матрёшка), comes from the first Russian female name “Matryona” (Матрёна) or “Matriosha”. Vasily Zvyozdochkin was making the first Russian nesting dolls set in 1890. Its from a design by Sergey Malyutin, who was a folk painter in Abramtsevo. Doll themes often vary, from fairytale characters to world leaders. Matroyshka become Most Popular Toys For Children Made in Russia. This is some explanation about this doll :

Matryoshka is a set that consists of seven wooden dolls with a decreasing size. All dolls fit inside one another, one at a time. Each stacking doll is split into two in the middle and opens to reveal other small puppets that nest in it. Traditional Matryoshka dolls are usually round. The Matryoshka doll is elegantly painted to resemble a young, beautiful-looking woman who is dressed in a neuran costume. This costume is loose and fitting Russian traditional clothing. Stacking doll heads are usually also covered, which suggests to protect them from the cold and long-known characteristics of cold weather in Russia.

2. This Russian Matryoshka doll has a deep meaning about the family

In Russian, the word matryoshka literally means “little warden”. Matryoshka is also a familiar shortening of the general name Matryona or Matriosha. These are popular names among the old Russian women peasants. The root of the Latin word for Matryoshka is mater, which means “mother.” Motherhood, family and fertility affect the meaning of this Russian nesting doll.This doll has a large and close knit family that is common even important in traditional Russian culture.

Many generations and extended relatives played an active role in family dynamics, including grandparents, aunts, uncles and cousins. The Matryoshka doll is a symbol of Russian babushka, a strong mother of female leaders and a central figure in the Russian family. Russian Stacking Doll: Motherhood, Fertility & Family SymbolsThe shape of the Matryoshka doll is wide and full of figures, like the body of a woman who has given birth to many children. The shape of round and elongated Matryoshka dolls such as eggs, fertility and reproductive symbols that were popular since ancient times.

Sergey Malyutin is the artist who made the first Matryoshka doll in the 1890s. Vasily Zvyozdochkin is a a wooden craftsman who assisted him. But it was only popular 10 years later, at the beginning of the 19th century after being exhibited at the Paris Universal Exhibition. At that time Matryoshka won the bronze medal as the best puppet, which captivated the jury in terms of technical and education.

4. The first Matryoshka doll is stored at the Russian Museum of Toys

If you want to see the first Matryoshka doll made by Sergei Malyutin, you can visit the Museum of Toys in Sergiev Posad, Russia. After mesmerizing visitors at the Universal Exhibition of Paris, industry began to produced Matryoshka on a large scale in 1930. Since then this doll became one of the Russian icons of the country.

5. Considered a symbol of fertility

To Russian Beyond The Headlines, Yelena Titova, Director of the All-Russian Museum of Decorative, Applied and Folk Art Moscow explained the meaning of the Matryoshka as a symbol of fertility. Includes impressive women’s health, fertility and character as the mother of a family. This is illustrated in the figure of a woman on the outside of the doll that looks smiling with a rather stocky body. Healthy and happy women are a source of fertility for a nation.

6. Have some ‘twins’ in other countries

Although dubbed as a Russian icon and doll, Matryoshka has a ‘twin’ in several other countries. Long before Matryoshka, there was a Daruma doll in Japan that depicted a Buddhist monk from a temple in Shaolin. The describtion of The Venus Goddess statue from the Paleolithic era of Ancient Greece was also fat and smiling. Fukurumu from Japan was also describe Matryoshka as a symbol of fertility, in the form of a large doll containing 6 small dolls in it.

7. The unique arrangement in each puppet turns out to have meaning

Matryoshka dolls have a unique tradition of composition that has preserve until now. The outermost part has a picture of a woman with traditional warrior clothes and a scarf around her head. This figure as a family mother, because small dolls in it can assume as boys or girls.

But over time, especially after victory day in Russia, the composition of the Matryoshka doll became more flexible. Even some modern artists started making Matryoshka with famous Russian politicians like Lenin, Stalin, to Vladimir Putin.

8. The largest Matryoshka ever made consists of 51 dolls

In 2003, a Russian artist named Youlia Bereznitskaia completed the largest Matryoshka containing 51 puppets. He painted himself 51 dolls arranged according to size. The largest part has a height of 54 cm and the smallest is only as high as 0.31 cm. If we remove all the dolls, then arrange in a row, the length can reach 3.41 meters.

Those are some explanations about Matryoshka, Most Popular Toys For Children Made in Russia. Besides souvenirs, this wooden doll is also a Russian children’s toy in ancient times. Besides Matryoshka, there are several children’s toys that you can give as souvenirs for children from Russia. Russian items are mostly a display or home decoration. This is because Russia has unique motives in each of its objects. You can see the uniqueness of the Russian decoration from the unique architect of several buildings in Russia. That’s why Russia remains an interesting place to visit. Want to visit Russia? So learn Russian a little, so you know more about Russian culture. Russian is quite profitable to learn.