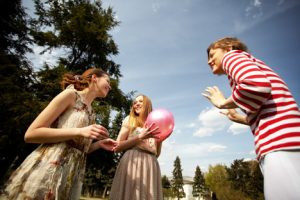 Not every child in Russia have the time or money to visit favorite places for them to play during holidays. But still, recreation is a close second necessity after foods, especially for children.

To keep their “fun” meters high, Russian children will find their own ways to make themselves entertained, like playing with their favorite toys or going out of their house with some friends, and do their own activities. Those activities may vary, from a short stroll on the neighborhood, visiting parks, or playing games.

There’s a lot of popular games that Russian children play in their free time. Do you want to learn what kinds of games the children played? Below are seven favorite Russian games for children!

Back in the Soviet era, children played this game with their friends to lift up their boredom. Back in those days, children don’t have plenty of option to have some fun, so they use whatever they found to play. Learn more about some activities that children in the Soviet era do outside their homes.

This kind of game involves the use of sharp objects, so an adult’s supervision is highly advised. Even though the game is quite dangerous, some Russian tweens still played it.

Every player takes turns to throw the knife inside other player’s territory to gain theirs. The player with most territory will win. If you want to play this game, you will have to find a surface that is soft enough so the knife would stick rather than bounce. You can throw the knife at the soil or wooden planks, but not at your friends.

This game is perfect for children to develop their skills in accuracy, blade handling and sense of caution. Just keep an eye on your children if they do play this kind of game.

2. Cossacks and Bandits (Cops and Robbers)

This game is, arguably, the best cops and robbers game ever, and will help to train your children to be a good secret agent. In playing this game, players must be divided into two teams. One as the Cossacks, and the other as the bandits. Both of the team then specify the area where they want to play, from yards, woods, and even inside houses.

The Cossacks, on the other hand, must find every bandit or forcing one of them to reveal the secret word, if they caught one. To make them spill the beans, the Cossacks can use some mild “tortures” to the bandits, like tickling them. They also have to guard their prisoners so other bandits could not free their comrades.

This game was once played by aristocrat’s daughters in the 19th century, but today, even boys could participate. Every player sits in a row while cupping their hands. Then, a leader is appointed to secretly pass a small item to one of the players. The leader will come to every player, holding their hands over the player’s hands while saying the line “I hold the ring!”.

Once the item has been passed, the leader will say “Ring-ring, come out to the porch!”. The player who received it then jumps up to escape other players as they will have to catch the one with the item (ring).

This game will test the children’s knowledge about their surroundings. The players will bounce a rubber ball, in each bounce, the throwing player will have to mention five names from their chosen themes, like “five names of animals”, or “five names of cities”, and so on.

The number of names is not limited to five. Players can make it more or less than five to adjust the challenge.

This game is very fun before the use of internet become so popular. Every player will have to stand inside a small circle, not allowed to move outside of it. Then, they have to throw a ball to each other. The ball must be thrown again immediately because the ball is a hot potato.

What’s unique to this Russian version of dodgeball is that the players are not divided into two teams, instead, a group of players will have to dodge balls from two directions. This game is good for children since it helps to develop their agility, endurance, and selflessness.

Players who still in the middle can save the eliminated players by catching the ball mid-air. If the player catches the ball after it touched the ground, the one who caught it gets eliminated too.

When there’s only one player remaining, he has to dodge the ball as many as his current age. If he made it, all the eliminated players will come back into the game. Yay!

This game is no different than most popular tag games. The leader will have to catch every player and tags them. Tagged players then have to crouch down or stand still, waiting to be saved by others. To prevent their tagged player from being saved, the leader must not chase the remaining players too far from the first one.

Russian children always played this game on holidays, mostly during summer. To make things more fun and “refreshing”, the leader will spray water to tag the player. A good way to escape the heat while playing outdoors.

Sounds fun right? Russian children have played these games from time to time, some even have been played since the Russian Empire era and still fun to play until today. These games also don’t force the children to go out of their safe zone. A simple open space like a yard is just perfect.

Forget the popular playgrounds in the big cities. If the children could have fun on their own yards, why would they bother to visit those places?