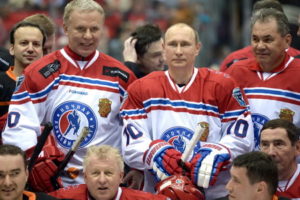 There are so many sports in Russia as the country is very successful in the field. The country is also famous in the world for being strong in sport. During the Soviet Era, the USSR national team won 14 medals of its 18 Olympic appearances. That was a huge fact that explains how Russians really love sports, strong and take it seriously.

Although ice hockey may be famous in Russia as the country has so many places to do the sport, football comes first. The number of Russian men play the sport is huge and children even play it regularly. Meanwhile, women will join the crowd when it comes for supporting national team. Everyone can see how many Russian people supporting the national team during FIFA World Cup 2018. (Also read: incredible facts of FIFA World Cup 2018 in Russia.)

Besides, football in Russia is quite competitive. There are also some talented foreign players who have been and are playing along with other talented local players in Russian league. Moreover, beach soccer is one of famous sports in the country after its international growth in the late 1990’s.

As mentioned before, Russia has so many frozen places during winter. Thus, many Russian people use them as the places to play ice hockey. For those who are serious about this sport, there are 123 hockey arena in Russia. The number is pretty huge for sport arena. There even is a yearly match among ice hockey national teams in CSKA Ice Palace, Moscow. Many people go to watch the match to support their favorite teams. (Read: things Russian folks like to do in winter.)

Some serious ice hockey training has bread so many talented players and even they have best players of all time. The training results in them winning so many ice hockey champion and 5 of which give them gold medals. Moreover, it is said that Russian ice hockey teams always dominate the championship.

This sport is also famous among Russians because it is traditional Russian hockey and a national sport as well. Moreover, according to a survey, it is the third most famous sport in Russia. Although most of modern rules to play this game were written in England, Russians claim to invent the game. This is because there has been bandy-like game in Russia before the standardized rules. Moreover, there is one important difference in the rules which is the boards that come from Soviet rules.

Bandy is much of ice hockey. With so many spectators, women and men play the game and take part in several championships. Russian women’s team won six silver medals in the six first world championships. Then, they brought home gold medal in 2014.

Another game on ice is on the list. Russia has a long history with this game. Nikolai Panin-Kolomensky won gold at the London Olympics in 1908. Then, at the Innsbruck Olympics, Soviet figure skaters Lyudmila Belousova and Oleg Protopopov won the pairs title in 1964. Russia or Soviet has since won gold for pair titles until 2006. It is the longest streak ever in the world’s championship ever. Then, a Chinese pair won gold in 2010 Winter Olympics. However, a Russian pair returned claiming the domination of gold winning in the championship in 2014.

Do you know Maria Sharapova? Where do you think she comes from? Along with Dinara Safina, she is one of top Russian female tennis players. She is also the highest earning female athlete. There are still so many Russian female players who achieve international success.

According to International Rugby Board (IRB), Russia is at 17th position in the world for the sport. There are over one hundred clubs with more than 20,000 players in the country. Besides, one of the strongest and largest Rugby team in Russia is in Krasnoyarsk a large Siberian City. The city holds several domestic matches with local media being among the crowd reporting the events.

Rugby has been in Russia long before Russian revolution. However, they went professional in 2005 with the launch of Professional Rugby League.

Gymnastics and acrobatics has been tradition in Russia. Thus, it is not surprising that gymnastics become one of popular sports in Russia. Moreover, the country won several championship both for rhythmic gymnastics and artistic gymnastic. (Read: modern entertainment that Russians love to see today.)

Russia has been in Olympics since 1994. Thus, there are so many gymnasts in Russia. One of the most famous gymnasts is Evgenia Kanaeva. She won three-time all around world champion. She was also the first and the only gymnast winning gold medals back to back at the Olympic games for rhythmic gymnastics category. For artistic category, there was famous Svetlana Khorkina who played from 1996 until 2004 Summer Olympic. During her time, she has won 7 Olympic medals and 20 World Championships medals.

Those are 7 most popular sports in Russia today.