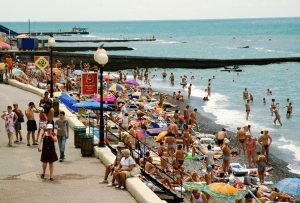 Sochi is one of the cities which is the most popular tourist destination in Russia. In this place there is a backdrop of snowy peaks of the Caucasus Mountains and the Black Sea coast. Stretching along 147 km, Sochi Raya is the second longest city in the world. Sochi was hosting the 2014 Winter Olympics and the 2014 Winter Paralympics on 7 February 2014 – 23 February 2014 and 7 March 2014 – 16 March 2014.

It was one of the events that made Sochi famous, especially during the summer. How is the hottest city in Russia the venue for the winter Olympics? Here are some facts of Sochi, the hottest place in Russia :

1. Flanked by the open sea and snowy mountains along the city

147 kilometers long on the edge of the Black Sea, Sochi is the second longest city in the world with a population of more than 330 thousand. Although long, the city only has an area of 3,505 square kilometers. Compared to Madura Island, the area of Sochi is not up to three quarters.

This territorial condition makes the entire Sochi region directly adjacent to the Black Sea on one side. Meanwhile, on the other side of the city of Sochi there is the Caucasus Mountains. Snow covering that mountain make the view so beautiful. These two beautiful natural features flank the entire city.

2. Sochi is an ancient fairytale city

Sochi have hundreds of ancient legends and tales. Even reportedly, taxi drivers there always welcome tourists with a little fairy tale on the trip. Almost every inch of the city of Sochi keeps Russian historical stories, such as the bride’s ghost on Mount Akhun and Eagle Stone  which are related to ancient Greek mythology.

One of the famous fairy tales in Sochi is a tale about the statue in the form of Prometheus. In the Sochi National Park area there is a statue of Prometheus, an important figure in Greek mythology. He stood on a large rock, with hands and feet bound to a chain.

In a fairy tale, Prometheus is said to steal fire from Lord Zeus and give it to mankind. He was then punished, tied to an Eagle Stone until his body was eaten by eagles every day. The Eagle Stone is reportedly located in Sochi, because almost every day there is a mountain eagle coming to make a nest around the rock. To preserve this legend, a Prometheus replica was built on it.

3. Being the hottest region in Russia

The location of Sochi is on the edge of the Black Sea, so make Sochi is the hottest region in Russia. But in the winter, the mountainous area is become attractive resort for skiing. Maybe this is one reason Sochi hosted the winter Olympics in 2014. Although the city is famous for the hottest cities, Sochi is very comfortable in winter.

4. The nightlife is able to unite all walks of life

There are many resorts, restaurants and nightlife venues in Sochi. The best of that is,  people in all age levels and also all socials levels can enjoy the nightlife arena in Sochi. From contemporary young people to the elderly, they don’t seem to hesitate to sit together enjoying drinks and music.

The competition that led Lewis Hamilton to the championship podium received praise from various parties. This German Tilke racing circuit is also the first F1 track in Russia. The stands can accommodate more than 55 thousand spectators, with a magnificent and spectacular design.

6. The second longest city in the world

Sochi is one of the most popular tourist destinations in Russia. The location of Sochi in Krasnodar Krai, near the Russian border with Abkhazia, Georgia, providing an enchanting backdrop with snowy peaks of the Caucasus Mountains and the Black Sea coast. In Russia, there is no more interesting road than the seafront highway that connects Adler with the center of Sochi. Stretching along 147 km, Sochi Raya is the second longest city in the world. This city was not as busy as it is today.

7. Called the Summer Center in Russia

Because the area is close to the Black Sea, people call Sochi as ‘Summer Center’ in Russia. There are many resorts and entertainment places in this city. Around 4 million tourists visit Sochi every year . The tourist season in Sochi usually runs from May to September. The Sochi population consist of 343 thousand people, will double with the presence of tourists in those months.

8. Has Many Unique Architectural Buildings

One exciting opportunity if you can take the time to come to the Sochi is looking for unique Russian architecture. There are many buildings in this city that have unique building architecture. Of course with the typical style of Russian buildings. In the city of Sochi you will find buildings such as the Primorskaya Hotel, Alexander Pushkin library and the plaza in front of the Winter Theater. Of the three buildings, they have their own uniqueness. So that the building can also be a good spot for taking pictures. For this reason, the camera is one of the mandatory objects to carry when you travel to Russia.