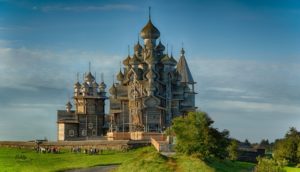 There are main tourist destination in Russia. The destinations usually around the journey of Golden Ring, traveling on big rivers like the Volga. In addition, long distance trips like the Trans-Siberian railway line. Starting from 2013, many people was visit Russia. Its arround 28.4 million tourists. The total makes Russia the 9th most visited country in the world and seventh in Europe. The most popular tourist destinations in Russia are Moscow and Saint Petersburg.

They are the capital and the former capital of the country. Tourists visit many interesting attractions places in Moscow and St. Petersburg. Here are some unique facts of Russian architecture you can visit in Russia :

Kremlin is a historic fortress in the center of Moscow. Brick was the main material for the construction of the Kremlin in the 15th century. Kremlin is bordered by the Moscow River to the south. There are St. Basil Cathedral and Red Square in the east. There is Alexander Park in the west. The length of the Kremlin’s wall is more than 2 km. While its height reaches 19 m, its width is 3.5-6.5 m, and its width is 27.5 ha.

Kremlin has 20 towers, the most famous is Spasskaya. Spasskaya Tower reaches 67.3 m with 6 m diameter center clock. Kremlin fortress is not just plain standing, it has relics such as churches with Russian cemetery cemeteries. There is also an army hall where there are various heritage items. Its including horse-drawn carriages, crowns, clothing, jewelry and weapons that are still tsar ownership.

That unique building was the residence of the Czar of Russia. Now Kremlin become the president’s office. There is a church in the front square arround Kremlin. Now that place become a place of inauguration of the president. Around the field, there is a canon made of bronze in 16th century. A large area makes Kremlin the largest official resident in the world. Its along with the White House and Buckingham Palace. See also best places in Moscow for muslim traveler.

Red square became a place of ceremonies. It became the starting point for the Military Parade on every Russian Victory Day. There is the Soviet Union History Museum, St. Basil’s Cathedral around Red Square. The construction of the museum occurred in the 14th century along with the fall of Kazan era. There is Lenin Mausoleum whereas place for Vladimir Lenin preserved body.

One uniqueness of the Red Square is the color. In accordance with the name Red Square, the area is red painted. It displays a different impression compared to other place. Red Square also serves as a place to hold a concert. Until now, many performers who act in Red Square. They are Linkin Park, The Prodigy, t.A.T.u., Shakira, and Scorpions. Also Paul McCartney, Roger Waters, and Red Hot Chili Peppers. You may read also best places in Russia for holiday

This museum stores various objects that related to art and culture. The goods not only from Russia, but all over the world. Hermitage is the largest and oldest museum in the world. There are about 3 million collections stored neatly in 6 buildings. But you can not see all the objects stored in the Hermitage Museum. You can visit 5 of the 6 existing buildings. There are Winter Palace, Small Hermitage, Old Hermitage, New Hermitage and Hermitage Theater.

There are 350 buildings to place all the goods. That buildings cover 20 kilometers if taken one by one. The goods are too much. If you spend time to learn one by one, it will take you a dozen years. Some of the ancient remains are unpublished. It is said that it deals with the secrets of sensitive civilization and not for general consumption. See also best places in St. Petersburg for muslim traveler

4. The Wood Church on Kizhi Island

Lazarus’ Resurrection Church is the oldest wooden church in Russia. Its construction was done at the end of the 14th century. It has 22 domes with unique shapes. Uniquely, this building does not use nails in its construction. Instead, pieces of wood have been united to form even the most complex structures. The beauty of this church on the lonely island is so captivating the eyes of tourists. Usually, they come to explore the wilderness of Russia.

In the past, Kizhi Island became a residential area for some people. However, they moved to other areas. Its because of the natural damage. Its caused by the dredging of the surrounding natural resources. The fact is still dug deeper. But certainly, Kizhi Island comes with a clean, green and quiet condition. There is only a wooden church standing. Many wooden buildings could not stand for centuries. But the old church on Kizhi Island is still solid today. You may see also best halal restaurants in Moscow

Moscow Metro is a fast train system. Its serving the Moscow region as well as several neighboring cities. Such as Krasnogorsk and Reutov. Mayakovskaya is the most beautiful subway station in the entire Moscow Metro system. The station is arguably different from the others. The ceiling has 34 ceramic mosaic motifs.

In World War II, people used this station as a shelter. The contribution of the architecture, make bunkers transformed into beautiful place. Until 2014, Moscow Metro has 194 stations with 325.4 kilometers of travel routes. Most of Moscow Metro lines are underground with a maximum depth of 74 meters at Pobedy Park Station. In 2012, Moscow Metro became the second most rapid transit system in the world. Its after Seoul Metropolitan Subway. Compelling designs complement all the sophistication of this underground transportation technology. Read also best halal restaurants in St. Peterseburg

Thats all some unique facts of russian architecture. They always make tourist interest with their beautifulness. Are you ready to go to Russia?