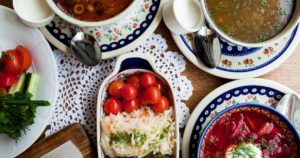 What is the most favorite foods in Russian during the summer season? The months of summer are July, June, and August. The summer starts at July and ends at August. In summer, the days are hot and warm, and the days are long and the nights are short. The trees are green in everywhere. We may also see the flowers in the parks and squares. The students have got the summer holidays, so they don’t go to school.

In the summer, there is a phenomenon, called as Summer Solstice where the longest day and the shortest night of the year. The summer solstice is falling around the late of June – In the 21st – 22nd of June – when there are approximately 17 hours of light. And also, In June, the first month of summers, we may see the strawberries in the forest and gardens.

In the middle months of summers, July, the day is hot and the sun shines brightly. The sky is blue without any cloud. And in the last summer months or end of summer, August, the day is cool. In August, there are many mushrooms, berries and fruits.

The season provides fruits, berries, greens and fresh vegetable. Russian people are very known how to serve it into delicious food in the summer. They make cuisine (we may call as Russian summer cuisine). They also fish the fish in the River and lake.

And in the summer, we also correlate this with food. Bread and salt for example, people also serve bread in any season. They also fermented the rye. And in the hot day, we may assume the cold drink will make cold the body, kvass for example – a very refreshing drink. Not only cold drink, but also cold soup is served in the table of Russian during the summer. Yea, Russian has variety of soup, depend to the seasons; we may call as the hot and cold soup. Here are 8 Favorite Foods in Russia During Summer

I suppose to write Russian Kvass as the first. I don’t know whether is the most favorite foods in Russian or not. But, what is kvass actually? Kvass is a kind of carbonated drink or soft drink tonic and fermented beverage. It made from rye bread fermented and fragrant herbs or juices. And it has very low alcohol content not exceeding 1%. Kvass is the best consumed cold in the hot of summer days. Off course, by drinking the kvass, will make cold the body and accompanied you to pass the day of summer.

Once more, kvass is a very refreshing drink which is heritage of ancestors, since the 11th century. The Russian people assume it as they may impossible to imagine a Russian summer. Kvass has another function that people are also used as ingredient in the traditional cold soup, for example okroshka.

As mentioned before, the Kvass is also used as the ingredient of okroshka. Okroshka is a traditional soup which is always served cold not hot. So, it best consumed during the hot summer days. The ingredients of okroshka are kvass, vegetable (cucumbers, green onions, and boiled potatoes), eggs and minced meat. People usually add the okroshka with sour cream, mustard, horseradish and spices.

Cucumber is a one of best food to consume. The cucumber and radish salad will refresh your day in summer day. The ingredients are slice of cucumbers, radishes and green onions. In the serving, the ingredients are mixed with sour cream, chopped dill and salt and pepper. It is easy to make.

This food is typically served with potatoes (boiled or mashed) or buckwheat. But, sometime, adding rice and other grains is suitable. In summer, adding vegetables (squash, carrots and tomatoes) are well recommended.

The season provides many fish in the lake and river. People may go for fishing and catch many fishes – usually perches, carp or young pike. Immediately, when the fish is fresh, the stewed or baked the fish in sour cream, other cooking method is suitable such fried. The fried carp in sour cream is the popular one in Russian as a dish.

Usually, Russian Buns is always cooked. But, Apple is put into buns and pies fresh. Apples are peeled, cut into slices and sprinkled with sugar or honey.

The popular drink in Russia is Mors. Mors is introduced after the kvass. Mors is a fruit infusion drink made of berry juice (cranberries, cowberries, blackberries, raspberries), diluted with water and sweetened with honey or sugar. I think, it is my favorite foods during summer.

Those are 8 Favorite Foods in Russia During Summer. Season in Russian also determine the kind of food, whether cold or hot. Russian has hot soup for winter and has also cold soup for summer. Not only food, but also drinking is also followed the season. We may serve the hot drinking to warm the body and cold drinking to cold the body. A carbonated drink, Kvass, is an example of drink for summer season. Mors is popular drink in Russia and may find in anywhere. Fruits like apples and berry is also made to be food and fermented and diluted to be drink. We also may go to fish and catch the fish, after that we may bake, fried, or stewed the fish and added the sour cream. You may choose your favorite foods above.

Best suggestion, read also about the most favorite food in Russia during winter, bread riots in Russia as the sign of revolution due to the scarcity of food, and Russian’s New Year celebration.