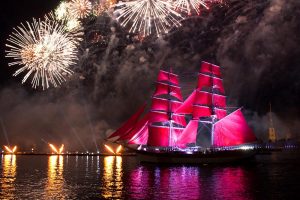 Russia is a country that has a very large area. Because it is located adjacent to the North Pole, Russia has cold weather. Some regions of Russia experience winter almost every year. However, that does not mean the Russians cannot enjoy the summer. Summer is the season that the Russians are waiting for.

The Russians will do something special during the summer. In addition, there are many summer festivals in Russia. Here are 14 Summer Festival In Russia That You Can’t Missed :

The White Night Festival is one of the interesting festivals. This festival is in every summer precisely in mid-June and July. You can enjoy the beauty of Saint Petersburg sky which is still bright at night. You can also enjoy various events such as music, drama, and ballet to other events.

Mid-year is the perfect time to enjoy the Summer Festival. The festival usually in the middle of July to early August. The beauty of the blooming flowers, the various flower designs and gardens make the city view more beautiful.

Starting as a Christmas Fair in 2012, Moskovskie Sezony (Moscow Season) is now a series of urban events in the Russian capital throughout the year. You can enjoy honey jams from Russia and other countries and participate in various workshops. You can also watch street theater, and visit food carts to taste some typical Russian snacks.

An international balloon competition is annually in the city of Velikie Luki, Pskovskaya Oblast (Western Russia). Watching so many balloons scattered in the sky was a unique experience, while the pilots showed off their ability to perform various attractions.

Fountain Festival is ready to spoil the tourists who come. This festival is one of the spectacular festivals. This festival usually in May to September. You can enjoy the beauty and also the charm of hundreds of fountains and the performances of classical music, dance parties to dazzling fireworks.

Sankt Peterburg is the only city in the world to hold large-scale celebrations for students who graduate from the city. Music performances, pyrotechnic light, and a beautiful view of the ship with a deep red screen will be remembered for life. Its not only by the children who graduated from school, but also by everyone who witnessed it. Prepare your time to spend a night that you will never forget.

Russia has a unique and interesting architectural style. This makes Russia hold an annual International Architecture Festival which is usually at the end of July in the city of Oblast Kaluga. This name of this festival is Archstoyanie which will change the shopping area, bus stop, to public places to become interesting art objects. You can see and get information about the world of architecture.

This festival is the biggest jazz festival in Moscow. Usadba Jazz Festival invites Russian and foreign jazz artists. During its 12 years of existence, Usadba Jazz has successfully invited more than 500 world musicians, including the legends, such as Marcus Miller and Yusef Lateef. In addition to music, the audience also awaited the street action of Cuban artists, art markets, exhibitions and food courts (pujasera) from a number of local restaurants.

The Ahmad Tea Music Festival has been held more than six times every summer. The festival takes place in the center of Moscow, precisely in the area of the Tretyakov Gallery Park. Some famous Russian artists attended the festival.

Rock music is very suitable for the summer. That’s why the Maxidrom Rock Music Festival is held again after 3 years of rest. This festival has succeeded in inviting Linkin Park, The Prodigy, The Cardigans, Placebo, Lenny Kravitz, and other top world stars. Every year, this rock music festival invites world rock artists.

The first Park Live Festival was held in 2013 at one of the popular recreation spots in Moscow, the VDNKh architecture park. Over time, the region underwent a change so it became smaller. Therefore, since 2015, the Live Park was held at the stadium. This festival has invited various famous musicians, such as Limp Bizkit, The Killers, Paramore, Muse, and others.

The electronic music and technology festival of Alfa Future People managed to attract the attention of 40 thousand spectators. This event ever held with performances from one hundred DJs on the biggest stage in Russia with its unique light show. In addition to waiting for the appearance of the musicians, the audience also looked forward to high-tech demonstrations, outdoor yoga activities, camping areas, and more than 30 restaurants.

Sensation is a famous dance event in the world. The audience will be able to see the action of giant carousels, the Burlesque program, and the cabaret Moulin Rouge which has a special tent. The world’s best DJs, dancers, acrobats, amazing special effects, along with the white dress code that is carried clearly will turn the arena into an unforgettable amusement park.

Thats all 14 Summer Festival In Russia That You Can’t Missed. If you visit Russia in summer, you can enjoy special foods in Russia during summer. Don’t forget to bring your travel pack for summer in Russia. Of course you need packing list items for weekend trip in Russia. If you interest come to Russia during summer, its recomended you visit Russia for 2 week, so you can attend some amazing festival. So you must prepare your travel pack for 2 week in Russia.