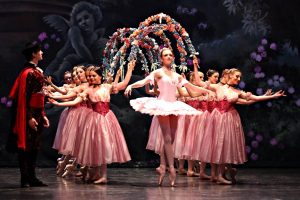 Russia is a country famous for its global festivals. Almost every month Russia holds an interesting festival. In certain months, some festivals are very festive. For example when easter, new year, and summer. Summer is almost here. That means many summer festivals are ready to be held. What are the Russian festivals in July? Let’s celebrate month of July in Russia with these beautiful festivals!

White nights usually occur in summer mid-June to early July. It’s called white night because at night the sky of the city of Sankt Petersburg still looks bright. Every year this phenomenon is also enlivened by the White Night Festival with various events, such as staging music, drama, ballet, and other interesting events.

White Night or in Russia better known as Beliye Nochi is a phenomenon where the night looks so bright as during the day. The White Nights Festival usually takes place from June 11 to July 2.

This unique phenomenon is caused by the geographical location of St. Very northern Petersburg (about the same latitude as Oslo, Norway, the southern tip of Greenland and Seward, Alaska). When White Nights of various festivals take place with great fanfare, hotels are usually filled with foreign tourists who want to feel the nuances of this unique night. Music, dance, and opera performances helped to redress this festival. In fact we can see the bridges that are open on various canals on St. Petersburg which is used as a giant TV.

Almost every season, Moscow displays its beauty which makes this city worth visiting. If you are planning a vacation to Moscow in July, you can take part in a summer festival held on July 20 to August 5. At this festival you will see the beautiful flowers to amazing sweets.

Ivan Kupala Night is enthusiastically celebrated in Russia, Ukraine, and Belarus on the night of 7 July. The celebration relates to the summer solstice when nights are the shortest and includes a number of Pagan rituals. The name of festival combines “Ivan” that have meaning of John — the Baptist. Meanwhile, Kupala is related to a word derived from the Slavic word for bathing, which is cognate.

The latter is reinterpreted as John’s baptizing people through full immersion in water (therefore his biblical title of the Baptist). However, the tradition of Kupala predates Christianity. Due to the popularity of the pagan celebration, with time it was simply accepted and reestablished as one of the native Christian traditions intertwined with local folklore.

4. The day of family, love and fidelity

The first celebration of the day of family, love and loyalty of the Russian people noted on 8 July 2008. The holiday was established by the deputies of the state Duma and approved by all religious organizations of Russia. Its because every religion has its own examples of love and family loyalty.

In the Orthodox calendar on July 8 drops a day of celebration of saints Peter and Fevronia of Murom, which is the embodiment of everything that’s involved with the perfect model of Christian marriage.

Prince Peter, who fell ill with leprosy, from which it could not heal even the noble healers. He imagined in his sleep, that Febronia can save him. Febronia is the daughter of a beekeeper, farmer from the village Affectionate that in the Ryazan land. Peter promised the girl that after healing will take her to wife. Then the Prince, not thinking of going, took a Febronia, and left the Principality, lived with a girl for the common people.

Peter and Febronia died on June 25, 1228 ( new style 8 July) after returning to the palace. They were burried in the Church of the Nativity of the blessed virgin Mary in Murom. This holiday are already a symbol in the form of chamomile and medal, awarded July 8 best families for their love and loyalty.

Metallurgy as the art of producing, smelting and processing of metals known since the 7th Millennium BC. Its beginning it takes since the invention of mankind for the smelting of copper. Since then, black and nonferrous metallurgy became the basis of all industry, their products are used in construction, engineering and agriculture.

Russia has always been rich in natural resources. Today metallurgical production is one of the most important branches of domestic industry. In addition, the metallurgy is also a significant area of science and technology. Its includes obtaining metals from ores, the changes of chemical composition, properties and structure of metallic alloys and giving the metal a certain form.

There are many Russian festivals in July besides 5 festivals above. Like Kiss Day, World Chocolate Day, Fisherman’s Day, and so on. It is the right decision if you visiting Russia in July. In addition to attend so many festivals, you can feel the hype of summer day in Russia. There are many things to do by Russian in summer. You can also feed your taste with favorit food in the summer in Russia. Do not forget to visit beautiful places in Russia in summer. Also bring your itinerary for 2 weeks in Russia.