Home » Russian facts » Did Russian Parents Scare Their Children with The Story of Baba Yaga?

Did Russian Parents Scare Their Children with The Story of Baba Yaga? 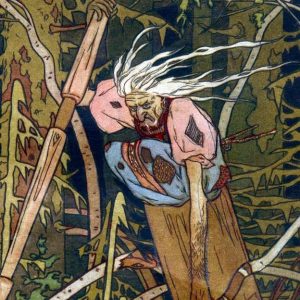 Have you ever listened to scary stories from your parents? Did you make a mistake before hearing the story?

Many ways parents do to educate their children. Often, they do it by telling a scary story. Usually it ends with a threat if the child makes another mistake, the character will come to the child. Is that true?

If you remember the story of Baba Yaga, the frightening witch. In your opinion, did Russian parents scare their children with the stories of Baba Yaga? Here’s the facts.

Children and all their behavior. Many parents sometimes do everything they can to educate their children well. There are many ways that these parents usually do to make their children calm and not make the same mistakes. One method that is often used is to tell scary stories and threaten the children with the characters from the story.

There are lots of fairy tales and folklores that have characters with creepy faces, evil characters, and all kinds of other things. Such figures will make children afraid of what figures are in their imagination after hearing stories or threats from their parents. Likewise, with fairy tales and folklore in Russia. Of the many figures, the most famous figure is Baba Yaga.

As we know, Baba Yaga is a witch who according to some of the stories is the figure of an evil witch. She lives deep in the forest. She can also fly using a giant mortar and pestle as a rudder. A witch who would kidnap children and eat them. Isn’t this kind of story enough to scare children?

Many people seem to wonder. Did Russian parents scare their children with the stories of Baba Yaga? Here’s the facts.

Yes, they did. Russian parents use Baba Yaga’s story to scare their children. Here are a few sentences that parents say to their children:

Children at a certain age often do a lot of things. Sometimes the things kids do are a bad thing. If parents see their children doing bad things, they will initially give subtle advice so that their children do not repeat the action. However, there are also parents who also threaten their children to use folklore and fairy tale characters. For example, Russian parents will say “If you behave badly, Baba Yaga will pick you up!”

Children usually still strongly believe in folklore and fairy tale characters like Baba Yaga. They would certainly imagine the frightening face of Baba Yaga. And Russian parents take advantage of children’s fears to threaten them about what they did wrong. The threat from Russian parents using Baba Yaga is because the witch likes to kidnap children and according to the story the kidnapped children will be taken to her hut. Baba Yaga’s hut is quite frightening for children. Is not it?

Children often act. The act they do can also be a mess that makes their parents dizzy. Most children are very difficult to be controlled by their parents when they make a mess somewhere. When parents see the mess caused by their children, Russian parents usually say, “If you continue to make a mess, Baba Yaga will eat you!”

Russian parents use Baba Yaga to scare their children because she is an ugly and evil old witch from folklore and fairy tales. Baba Yaga is described as having gray hair and very sharp teeth. According to the story, Baba Yaga who was able to fly to kidnap children using giant mortar and pestle as a rudder was very fond of eating the children she had kidnapped. Russian parents will tell about Baba Yaga who really enjoys the taste of children’s meat. The kidnapped children will be cooked and eaten by Baba Yaga in her creepy hut. Children will certainly be afraid to hear the story, right?

Children really like to play outdoors. Parents are usually worried if their children go to play too far from home. Children can get lost, do not you? So are parents in Russia. When Russian parents see their child playing outside, they will say, “Don’t go too far from home or Baba Yaga will catch you.”

Many Russian parents use Baba Yaga to threaten their children. They will scare their children with the story of Baba Yaga who lives deep in the forest so they don’t go too far from home when they will play. According to myths or legends, people who enter the forest where Baba Yaga lives will not be able to get out and return home if Baba Yaga catches them. Moreover, there is a story that says if Baba Yaga really likes to kidnap and eat children. Isn’t that terrible?

Let’s Celebrate Month of July in Russia With These Beautiful Festivals!

6 Facts about Booking Trip on the Russian...

All Facts About Uchan-Su Waterfall in Yalta

What You Need To Know About Alexander Nevsky...

How Many Churches Can You Find in Suzdal

Do You Want To Get New Experiences About...

Why Krasnoyarsk Becomes the Economic and Cultural Center...

6 Reasons Why Ivanovo is called The City...