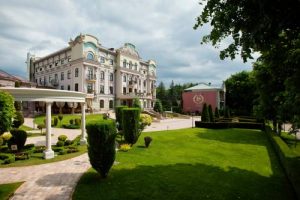 With an area of ​​17 million square km, the natural conditions and weather in all parts of Russia have never been the same at one time. The northern region is directly adjacent to the North Pole, while in the south the average is subtropical. Most regions experience long winters. But some actually record extreme temperatures in the summer. Summer is indeed the most recommended time for a trip in Russia. The number of tourist arrivals is increasing rapidly, they visited almost all cities and states. There are 12 Perfect Holiday Places During Summer In Russia.

Summer in Russia runs from early June to the end of August. Natives usually choose to spend holidays on the outskirts of the city, or sunbathe on the beach and river banks. They usually stop at the dacha (summer house) until close to school entry in early September. They will do something special during summer in Russia. But there is something you need to pay attention to when visiting Russia during the summer. Some inns don’t provide air conditioning, because most buildings in Russia are designed to protect from extreme low temperatures in winter. Here are 12 Perfect Holiday Places During Summer In Russia :

Karelia is a republic in northwest Russia that as one of the most beautiful places in the country. Nature in Karelia is amazing like lakes, waterfalls and trees growing on giant rocks. Ruskeala itself is a village that decides with Sortavala, one of the largest cities in the region.

The thing that can attract visitors here is the Ruskeala mountain park, with a marble canyon that is now a lake with clear water. Here you can rent a boat, dive or climb. If you visit Ruskeala during the summer, a light show on the lake will presenting for you.

The Stolby Nature Reserve is one of the most popular tourist destinations in Siberia. The main attraction of its nature reserve is rocks and cliffs, people usually call it Stolby or ‘pillars’ in Russian. Rock climbing and hiking activities are popular activities here. The reserve also offers a guided tour of the Siberian Taiga sprawling under rocks, a mix of hiking and botanical and zoological tours.

Velikiy Novgorod and Novgorod Agung are the same place. This place is one of the most important cities in the country. Velikiy is a Russian birthplace. For a long time, this city was a sovereign kingdom founded by merchants and ruled in a relative democracy.

Museum of traditional wood architecture Vitoslavlitsi is one place you must visit. There is also an open exhibition of Russian izbas (farmhouses) having an ancient tradition of building without nails or metal to hold wooden boards. The Kremlin fortress in Novrogod is also the oldest one in Russia.

The location of Petropavlovsk-Kamchatsky is on the Kamchatka peninsula in Russia’s far east. This is the easternmost city in the northern hemisphere. Visitors will be offered various activities such as climbing volcanoes, sailing and kayaking for fishing and hunting. The city also offers delicious culinary tours such as Kamchatka crabs.

The city of Kazan is more than a thousand years old and has always been an eclectic place, balanced between Russian Orthodox and Muslim culture. One of the city’s landmarks is the Soyembika Tower in the Kremlin fortress. For culinary, you will be offered a mixture of Russian and Tatars which is one of the interesting foods in the city. If you are here, don’t forget to try traditional tea with chuk-chuk, a Russian sweet cake dish.

Baikal Lake is the deepest lake in the world. Here you will find several hiking trails. In the summer you can swim in the lake, even though the water is cold. On the banks of the lake are several resorts, hotels and campsites.

Yessentuki is the name you might see on the shelves of Russian grocery stores around the world. The city of this historic resort is famous for its source of mineral water and hot water. This city has become a destination for people who are aware of their health since the 19th century.

Kaliningrad previously had the name Konigsberg. The architecture of the old city in this city still leads to Europe and not Russia. The Kaliningrad German heritage can be seen at the Brandenburg Gate that is still alive today. Fishing Village is a tourist attraction with re-created medieval-style buildings.

Flea market here is known as the best in Russia, many collectors from all over the world come here in hopes of finding relics from the second world war. Amber Museum is another popular attraction.

The city was founded in the mid-19th century. The best place to see it is at Eagle’s Nest Hill, the highest point of the city center. Vladivostok is also a culinary tourist destination because seafood is abundant here and because of its proximity to the Russian-Chinese border it is almost the only place in Russia where good Chinese food is widely available.

Ecotourism is growing rapidly in this region with new resorts and hotels popping up throughout Altai known as the ‘golden mountain’. Many who offer tours guided by guides there such as sailing, kayaking and fishing are other activities. Spa treatments are widely available with a special sauna in large cedar barrels. Altai is famous for honey and spices. Many resorts offer honey treatments and herbal tea ceremonies.

The city of Sochi is the city most visited by travelers who love sports. Sochi often hosts prestigious world sports, such as the 2014 Winter Olympics, the Russian F1 Grand Prix, and the 2018 FIFA World Cup which is taking place until mid-July. Besides being famous for sports, Sochi is a resort city that is a tourist destination for Russian residents when they spend summer holidays. In Sochi there are interesting attractions for environmentalists, namely the Caucasus Biosphere Reserve.

Every year between August and the end of October, the lake located on the northern border of Kazakhtan turns pink. Pink Lake became one of the most beautiful objects in the world. Lake Burlinskoye has the largest salt content in the western part of Siberia and has become an ideal target for mineral exploitation since the 19th century. The train line is made in the middle of the lake so that it can easily transport salt harvests.

The lake is an endorheic type, which means that there is no river that empties or flows out of it. As a result the mineral content in the lake remained. This condition makes microscopic shrimp called artemia salina well developed. During the summer, the three-foot, 22-foot-eyed small shrimp breed very rapidly. This is what makes the color of the lake turn pink.

Thats all Perfect Holiday Places During Summer In Russia. Don’t get the wrong clothes when you’re on vacation in the summer. You need to know what clothes to wear during summer in Russia. If you visit Russia during this season, you will able to attend summer festivals in Russia. Don’t forget to enjoy some popular foods during summer in Russia. Not only summer is fun for some places in Russia. It turns out that in Russia has the warmest place. You must know the warmest places in Russia. One of them is Sochi. Many interesting facts about Sochi that might be your destination when visiting Russia.