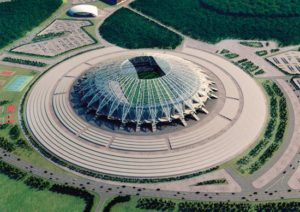 Russia offers so much entertainment when the country host the most anticipating football event in the world. As a host, I’m pretty sure the country prepares all of people needs – including the stadium.

12 Choosen venues participates and celebrate the 2018 FIFA World Cup Russia and offers the history, beauty, hi-tech facility, even extraordinary view from inside or outside . From 12 down to 3, Here are the top three of the biggest stadium in Russia.

Located in central Russia,  Saransk is the home of 307,000 people and the capital of the Republic of Mordovia . This city is one of the most pleasant cities in Russia. Always provide the best facilities , Saransk always regulary scoring high in the All-Russia city competitions in several years. The Mordovia stadium is the recently opened new home of FC Mordovia Saransk. The Mordovia already created the promotional poster to inform that this city is one of the host of 2018 FIFA World Cup Russia. From fifa.com, the bird represents “ bird of creation” in Mordovian mythology, the powerful, and symbolizing nature and life itself The bird. Bird and the football are decorated with traditional Mordovian pattern which represents the uniqueness of the culture, crafts, and the local arts.

In early 2010, the stadium was firstly proposed before the World Cup had got awarded to Russia, and the first building works began in late 2011. Due to lack of funding, the progress work slowly and results in stalled project until in 2014, the works were picked up again.

Take a look at this stadium first. You will notice that this stadium looks similar to South Africa’s Soccer City Stadium. Yes you’re right, this stadium was modelled after South African Stadium . The Mordovia stadium was opened on 21 April 2018, with a league match between Mordovia and Zenith Ishvesk. This Arena have capacity of 45,000 seats for the World Cup and wll be brought down to 28,000 after the World Cup by removing upper tier and turning it into a walking concourse.

Saint Petersburg was founded by Peter I the Great in 1703 as Russia’s new imperial capital. It is one of the Europe’s masterpiece city, created by Europe and Russia’s foremost creative talents. Nikolay Gogol , Fyodor Dostoevsky, Dmitry Shostakovich , Joseph Brodsky and Alexander Pushkin, left their imprints on the extraordinary city.

This home of the 5.2 million people offers beauty and elegance. From ballet to the masterpieces of the Hermitage Museum, from architecture to the performing talents of the Mariinsky Opera and ballet, such  wow!

Because of the historic value, Saint Petersburg city centre is one of the UNESCO World Heritage site. Tourism is the most important sectors of the city economy. Each year, Saint Petersburg is servicing about five million tourists each year.

The Saint Petersburg stadium, otherwise known as Krestovky Stadium were previously hosted the Confederations Cup final between Germany and Chile. It is the home of Zenit Saint Peterburg, the most successful club in Russia. This stadium well known for its retracable roof. This stadum is truly is the one of the 3 biggest stadium in Russia. The stadium is one of the super – modern landmark and located on Krestovsky Island. Saint Petersburg was one of the largest stadium- up with the capacity over 100,000 seats. A Japanesse architect Kisho Kurosawa was the man behind the architecture of this stadium. This stadium host knockout group stage, third place match, and the semifinal match on July 10

The design of the stadium is the spaceschip that has landed on the shores of The Gulf of Finland. The height of the building is 80 metre high declared as one of the world’s most modern arenas from technology aspec. Saint Petersburg was equipped with retracable roof and sliding pitch, which is able to host any type of event at any time – even this stadium still has the inside temperature about 15 Celcius in the winter.

After the world cup, the venue will host many different types of events, from concerts and show competitions in a whole range of sports. In 2020, the venue is one of the choosen stadum which host three matches in group stage as well as one of the competition’s quarter final.

This is it! best of  3 biggest stadium in Russia .The Luzhniki stadium is the main  and the biggest stadium in Russia. Located in Moscow , it represents the pride of the Russian as this stadium will host the final match of the FIFA World Cup 2018. This stadium was originally built to celebrate and as a home of Summer Spartakiad in 1956. After the event , the arena hosted each major of sports and the cultural that Russian have , including the 1980 Summer Olympics, ice hockey world championship, rugby , athletics and concerts featuring lots of the greatest musicians. It was the ambition of the Soviet leadership to upgrade the country’s sports facilities after the Soviet Union had tasted its first post-war success at 1952 Olympic. However, football is the most sport that hosted more matches than any other sports in Russia. Having more than 3,000 matches, football always had special heart in Luzhniki.  This stadium is the home by the Russian National team and various football club, including Spartak Moscow, CSKA, and Torpedo clubs. You have to visit this memorable stadium since this stadium previously held UEFA Champions League final in 2008, were Manchester United beated Chelsea in the dramatic penalty shoot-out .

The timeline to rebuild Luzhniki for Russia 2018 began in 2013. The rebuild is not easy, because they have to preserving the historical façade of the stadium , which has become one of Moscow’s true landmark. Inside the stadium, all of the things were totally refurbished : jogging track was removed, the stands moved closer to the pitch, and made rectangular, the gradient adjusted and two extra tiers added. The capacity of the stadum increased from 78,000 to 80,000. Luzhniki will retain its status as the country’s main stadium and still serving Russia for the national matches.

To get there, the stadium can be reached with red metro line 1. Station Sportinavia , or alternatively Vorob’yovy Gory, both lie within short walking distance of the stadium. Line 1 directly connects with Moscow’s city centre , and the ride from either Okhotny Ryad or Biblioteka takes no more than 10 minutes. If you wanna go by car, go to the  river and after crossing the Moscow River, you have to take the first exit at the bend where the stadium is located.

How to sleep near Luzhniki

There are few hotels to choose from if you wanna sleep near the stadium. Most near Sportinaya metro station, e.g Business hotel Spektr, Olimp Hotel, Blues Hotel, or the Yunost Hotel. If you love the culture, the nearby Novodevichy Convent is well worth a visit, while the Moscow state University building on the opposite side of the Moskva river is one of Moscow’s best landmarks.

So I think that’s far from enough when you talk about Luzhniki, Mordovia, and the Saints Petersburg. Each of the stadium have different stories and the value themselves. If you want to spend your holiday in Russia, make sure you go to those places. Don’t forget to prepare the vacation first, since there are many places that too good to be ignore and you don’t want to miss every single thing of the Russia’s masterpiece. This 3 biggest stadium in Russia is not the end, there still always have the story, and enjoy the hype of the 2018 Russia FIFA World Cup. Hope your favourite team win!