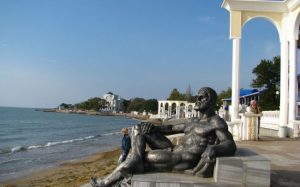 Cold, maybe that’s a synonym for Russia in your mind. But apparently, there are several cities in Russia that are as hot as cities in Indonesia. They even rarely see snow in winter. Here are Warmest Places In Russia That Perfect For Holiday :

Sochi is a small town on the Black Sea coast. Formerly this city was a quiet city, but has now become the world’s spotlight after many major sporting events take place there. During the summer, the temperature of Sochi can reach 39 degrees Celsius. In Sochi, you will see women wearing their fur jackets at 10 degrees Celsius. Because at that temperature, women can wear their fashionable jackets. Because the position on the Black Sea coast, Sochi is known as a resting place in the early 20th century. The city slowly began to make its first bathing building in 1902 at Matsesta.

In Yevpatoria, the air temperature can reach 41 degrees Celsius in the summer. This city of 100,000 residents is one of the interesting tourist destinations. Not only for those who want to darken the skin on the beach, but also lovers of history and eccentric buildings.

The quiet and comfortable area of the old city of Yevpatoria was once inhabited by Karaites, Crimean Jews. You can easily find tiny houses of worship commonly called kenasas in this city. There is also the Karaman Cafe which serves traditional Karaite dishes. While walking around the city, you can also visit the Juma Jami mosque, the Prophet Elias Greek Church with its beautiful stained glass windows, or Turkey’s only ancient bathhouse in Crimea.

Anapa is associated with a sunny and cheap holiday destination in the south. However, behind the smell of shashlik, corn and beer, this small town offers cultural heritage so it’s worth a visit.

Anapa was a popular holiday destination during the Russian Empire. After the Russian-Turkish War (1828-1829), the city became part of the empire and a favorite vacation spot and a health resort. Along the wide bay around Anapa, the sea is mostly calm and flat. About 200 days a year, the weather is warm enough to swim and you can take a romantic walk along the beach.

Here, you will find Hellenistic fragments in tombs and graves from ancient Greece. This artifact is displayed at the archaeological museum next to the Gorgippia ruins in downtown Anapa. For nature lovers, not far from the city there is a perfect location to relax, away from the crowded beaches and bloody history: the Vityazovo Hole and the Anapa hills. Here you can visit the beach tourism center next to the Black Sea.

This city is arguably the southern part of St. Petersburg. Taganrog was founded four years earlier than Saint Petersburg which is on the Baltic Sea coast. However, the Azov Sea, whose coast is the foundation of Taganrog city, is the most shallow sea in the world. So it cannot accommodate Pyotr Agung’s plan to build his fleet. Even so, we still thank Pyotr because the city has pleasant beaches and sea air.

The city also offers many things to try, ranging from fresh fish in local markets and restaurants, to museums and theaters. In addition, the great Russian writer Anton Chekhov was born in Taganrog. So, you can take a guided tour to sites related to Chekhov’s life and learn something new.

The capital of the Republic of Dagestan is also named as one of the hottest cities in Russia, with temperatures reaching 38 degrees Celsius in the summer. You can enjoy a long warm afternoon. Take a walk to the old lighthouse on a hill surrounded by narrow alleys of eastern style and low-roofed houses. Or, you can enjoy lunch by sitting on a sandy beach while looking at the Caspian Sea.

You can buy a bottle of cognac or the famous Dagestani wine, then enjoy it on Mount Tarki-Tau. This mountain presents the best panorama of Makhachkala and the Caspian Sea. The Tarki settlement, which is now inhabited by no more than a thousand inhabitants, was once part of the Silk Road.

Astrakhan has a home nickname for Russian watermelons. Watermelon planting is popular in various regions of Russia, even among Siberian Evenk tribes. However, Astrakhan which has an average summer temperature of 25 degrees Celsius. So that this region produces the best watermelons in Russia, with the widest watermelon plantations in Russia. If you want to taste the red and sweet watermelon from this region, you should come in August. This coincides with the holding of the Russian Watermelon Festival. You can taste various types of watermelon, including watermelon ‘yellow’, the pride of local farmers.

In addition, tourists will also be spoiled by the beauty of the Volga River which blends with the Caspian Sea. When visiting here, you can rent a boat from the locals or book a fishing tour package on the Volga River from a local tourism agent.

The Republic of Karelia is a pearl in northern Russia. Visit Kizhi Island on Lake Onega, a UNESCO world heritage site, then take a walk in the open-air museum and enjoy the beauty of the ancient Russian wooden church. Besides that, don’t miss the opportunity to visit Valaam Island on Onega Lake and the beautiful monastery.

The best way to explore the natural beauty of Karelia is to kayak on a fast-flowing river while enjoying views of the pine forest along the way. If you have more time, visit the Solovki Islands to enjoy the history of the monastery and learn about the Gulag camps from the Soviet era.

Thats all Warmest Places In Russia That Perfect For Holiday. Don’t forget to enjoy popular foods during summer in Russia. If you want to visit Russia during summer, you must bring summer packing list in Russia. You must know advice to do backpack traveling to Russia because there are many amazing places to visit in Russia. Many places in Russia are cheap to visit. So you can save money during a visit to this country. Many cheap restaurants in Russia also serve delicious food.