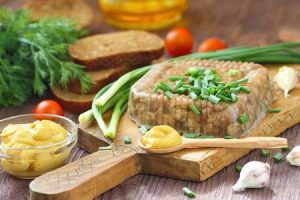 Before deciding to go on vacation overseas, you should already gather all the important information especially about the cuisine. It is important to always feed your hunger,   but don’t forget the essential taste that you will experience. You must be careful not to try something weird, as the look might not always represent the taste.

Talking about Russian cuisine, as the wide range of multi-ethnic there, you will find various kind of dish that has unique flavor. Those foreigners who have already tried some of Russian cuisine give opinion that most of the dish is unpalatable, a little bland, and somehow difficult to swallow. It might be because of the weird combinations and ingredients that are not usually used in their origin country. Therefore, here are 8 Russian cuisines you probably won’t try.

For many reasons, holodets belong to the top list of the weirdest cuisine that foreigners won’t try it again for the second time. The first thing across in mind is that how it can be eaten? Although the shape might be cute as you can make it based on your preference, but the mixed ingredients and the concept does not feel right. Why? Because actually it is an appetizer, holodets or aspic is a meat jelly made from chopped pieces of pork or veal meat with some spices added (pepper, parsley, garlic, bay leaf) and also completed with little amounts of vegetables (carrots, onions).

The meat is then boiled in large pieces for long time periods until it is fully cooked, then chopped into smaller pieces, repeat boiled for a few times again and the last step is freeze at the refrigerator for about 3–4 hours. Actually what makes Holodets looks weird for foreigners is that the meat that usually served in hot plate as the main course, but here in Russian people served it cold as the appetizer. But the choice is yours, if you want to feed your curiosity then please enjoy your food.

Imagine a cake which has salted herring layered, contain of cooked vegetables, and a coat of grated beets and mayo. It might sound gross for foreigners at the first time hearing the description. But in Russia, every mother always served that cuisine on their family time especially at special occasion like Christmas Eve or New Year celebration. Talking about the taste, actually it has rich tasty as the mixture of lot ingredients (salted fish, potatoes, beets, carrots, onions), salty which comes form lots of mayonnaise and of course the fishy taste which is formed form the fish itself. How is it? quite unique and interesting? Try or not if you dare.

Compared with the previous cuisines, this is simpler and the ingredients are not that much.  Made from just pickled herring, olive oil and chopped onions, the taste is not as simple as it is. Because what the outcome is that the herring are quite salty, yet so fishy, and the onions which just make it worst by its bitter taste. Even some Russian are not so into this kind of weird taste.

Still related with herring, this dish is actually looks better even for foreigners. But once you dip into the plate, the feeling might be very strange and unusual. As your taste are not familiar with this kind of sensation. Made of herring porridge, eggs, bread, butter, onions and apples, Forschmak is served while it still hot.

Russian people really like pickle everything, especially during winter season. They used to eat the pickled foods along with Vodka. So don’t be surprised if you find a Russian enjoy their pickled cucumber in one hand and a glass of vodka in the other hand. The foods might be varying, from vegetables to tropical fruit. Their favourite vegetables usually made for pickling are cucumbers, tomatoes and peppers. Besides, they also love making pickled foods from mushrooms, cabbage, apples or even watermelon.

While mostly Russian cuisines are dealing with meat and herring, this one is related to the green vegetables. They simply put fresh parsley, dill, green onion, etc., on a plate and finish. They eat it raw and fresh like a rabbit.

Another festive cuisine which must be served by Russian families during New Year’s table is Olivier salad, also known as Russian salad for foreigners. Actually the name of Olivier is derived from the creator of the cuisine, that is the French chef named Chef Lucien Olivier. He worked in one of Moscow restaurant. Then he is well known around the country by the era of Soviet, about in the 19th century. Basic Soviet “Olivier” consists of boiled potatoes and carrots, sausage, hard-boiled eggs, pickles, green peas and dill. All of these ingredients then cut in small cubes and poured with mayonnaise. Well, seems interesting and the good taste temptation. But for some foreigners who is not familiar with salty taste, then you probably won’t try this.

Okroshka is basically a cold soup based on lime milk. It also belongs to a salad. The main ingredients are two types of vegetables that can be mixed with cold boiled meat or fish in a 1:1 proportion. There are typically two types of vegetables in okroshka. The first types should have a neutral taste, such as boiled potatoes, turnips, rutabagas, carrots, or fresh cucumbers. The second must be spicy, consisting of mainly green onion as well as other herbs—greens of dill, parsley, chervil, celery, or tarragon. Different meat and poultry can be used in the same soup. The most common ingredient is beef alone or with poultry. If it is made with fish, the best choice would be tench, European perch, pike-perch, cod, or other neutral-tasting fish.

The hot soup might be fine, but cold soup, you must think twice.