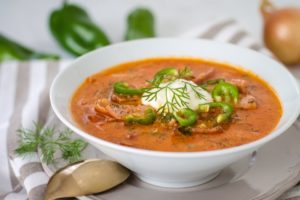 Meat lovers, vegetable lovers, what else? Fish lovers, right? Russia is quite a good place where fish can easily be found. Even though some people still know nothing about these dishes, it’s considered delicious and popular in Russia. Fish which are good for our health, full of vitamins and minerals that we need for our body, yet still low in fats.

The chewy, soft texture you can get from fish also feels good. Especially, if you can cook the dish just well, so that there would no longer be any stingy or fishy smell that will disturb you a lot. It’s great for your body, comforting and nice for your taste buds, yet still being easy to cook.

Beside popular for their favorite foods in Russia during summer, Russia also popular in their fish dish. Russia has a lot of yummy fish dish that’s unique and must try, even though most of them are salad, soups, main dish or appetizer instead of most favorite dessert in Russian cuisine. Well, who wouldn’t want that in their desert, though. However, those yummy fish dish are luckily also easy to make at home, despite in which country your home is. Here are those delicious fish dish you might never think of but seriously should try at least once :

For salad lovers, gather and prepare your spoon to dig into this yummy salad with canned fish. It is called mimosa, because of the similarity between the boiled egg yolk on the surface with spring flowers on the snow. This salad can be presented traditionally just with those boiled egg yolk crumbles or covered by fresh chopped dill on top. Beside how appetizing it looks, it’s also easy to make.

You just have to mix altogether canned fish of your choice such as salmon, mackerel, or trout with the rest of the ingredients. Usually, the traditional recipe would use boiled egg whites and yolks which are crumbled and sprinkled over the top. Beside that, there are also chopped onions and crumbled cheese. For the dressing, mayonnaise can be the right one. If you prefer to eat more veggies, you can also add boiled carrots or potatoes. Complete pack in a bowl, yum!

If you’re currently craving for a warm bowl of soup aside from other most favorite food in Russia during winter season or most popular autumn foods in Russia, then fish solyanka can be a good option for you. Solyanka soup can actually made from meat or mushroom, but this version is very delicious. Solyanka is spicy and sour, so imagine how great would it be with fish. Its thickness will warm you up and increasing your appetite as you take a spoon of it. This soup isn’t hard to prepare too, it’s like usual soup vegetables, but instead of using chicken . salmon, freshwater crayfish are being put inside instead. Fish match best with lemon, so after every step is done, you can squeeze lemon on top and it’s almost done. Last but not least, typical Russian dish, sour cream and fresh dill are almost a must.

Talking about fish dish and Russia can be far from Ukha. This Russian clear fish soup which originally wasn’t fish soup has gain popularity as one of the best dishes in Russian cuisine. It’s also famous as one of the halal foods in Russia that every muslim tourist must know since it contains no pork. This soup is made by different kind of fish, such as bream, wels catfish, northern pike, ruffle, perch, tench, sheatfish, or burbot as the main flavor to the soup. To make a good quality soup, the fish should be fresh and not defrosted for the best taste. It’s a very simple soup that doesn’t use too much vegetables, only parsley, leek, potato, bay leaf, parsley and sometime root vegetables. Enjoying this bowl of fish soup would be better when it’s still hot and accompanied by pies such as pirozhki.

Another salad with fish is on the line, ready to satisfy every salad lovers with such a new authentic taste that come out of it. Dressed refers to the herring that’s covered by coat of vegetables on top of it. The vegetables that being used are potatoes, carrots, beet roots, and onion. Deep beneath those yummy coat, you can find the pickled herring cut into cubes. Like Mimosa salad, it has mayonnaise as the dressing. On top of it all, boiled egg yolks and whites are also crumbled and sprinkled as the final layer. Most of the time, Russian add chopped fresh dill on top or any greens such as celery or fresh parsley. You’ll really enjoy this fresh and creamy salad well and feel full after that.

Pastry and fish lovers, this is your time to shine. Coulibiac come with the complete packages of brioche or puff pastry that’s baked beautifully as the surface. Beneath this pastry shell, hidden a rich fillings consist of salmon and rice as for the carbs. Along with that, usually people use hard-boiled egg, mushroom, and chopped dill. However, salmon isn’t the only option that you can use for making this yummy pie. You’ll love the crunchiness that you’ll got right after you take a bite, followed by the mix of the fillings texture, soft yet a bit grainy from the carbs. This most popular Russian fish dishes that you can try at home will fulfill both your taste buds with goodness and your stomach’s need.

Bored and getting enough of hamburger with beef patty that looks nothing like the one you saw on the ads? Don’t worry, cause now you can make your own salmon patties easily. This salmon patty isn’t just easy to make, but you compliment it with any other carbs. You can serve it with potato in any style or fluffy hamburger bun. All you have to do to make this salmon patties is simply using salmon, egg, and onion. You can add salt and pepper to taste. After you make a nice shape then you can start covering it with breadcrumbs. You can fry this patty with your favorite vegetables oil for a while until it turns golden brown.

Eating home cooked foods sometimes taste and feel a lot better than the restaurant-made one , right? Well, it applies most of the time, especially if it’s cooked by someone you adore or your mother. You should start learning how to cook simple and most popular Russian fish dishes that you can try at home for yourself. Where? You can find in the list above. Beside how easy it is to make, the ingredients and method you’ll need can also be categorized as easy. Even if those are fish recipes, some of them can be modified with other meat or even made meatless. Enjoy your first try and tell someone about how it turns out to improve your cooking skill overtime.