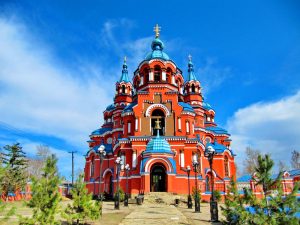 When you’re in Russia, it can never go wrong for you to explore all of the city there, including Irkutsk. People mostly visit St. Petersburg where there are a lot of recommended places in St. Petersburg for your lovely valentine’s day. There’s also Moscow, these two city might be the most famous place for tourist, but it’s great to explore a different place in Russia. If you love nature and arts, this city could be a good-to-go. However, before you go anywhere, check these surprising facts of Irkutsk,  best destination to visit, that could make your journey a lot more interesting.

1. One of the biggest city in Siberia

With a total area of 277 km2 , Irkutsk is then known as one of the biggest city in Siberia. It’s located about 850 kilometres to the south-east of Krasnoyarsk. It’s also close to the famous Lake Baikal with all of the interesting facts about Lake Baikal you shouldn’t miss out. If you want to visit Lake Baikal, you should also stay and go around this city for there are a lot more to it beside Baikal.

Irkutsk consists mostly of hills and valleys of the Central Siberian Plateau.

Surrounding Irkutsk, a dense taiga with pine, stone pine, spruce, forest and steppe. These beautiful Taiga will amuse you as soon as you step into it.

4. Founded as a wintering camp

During 1652, this city that lies along the Angara river was founded as a wintering camp. A fort was built 9 years later, during the first Russian colonization of the area. This place then became the main centre of Russian trade route to China and Mongolia. 34 years after it was founded as the wintering camp, this town acquired its status. This is the history that underlies the founding of this beautiful town.

5. It was named after the Irkut River

The name Irkutsk was named after Irkut River. It’s derived from the Buryat word for spinning. It’s a river in the Buryat Republic. It’s the Angara River’s left tributary.

After its various history, Irkutsk started to develop after discovering a  gold mine. The city was getting rich thanks to the gold-mining activities. This explains pretty much the beautiful and wonderful architecture that was built with quite a large cost. It then became administrative and cultural center by the end of 18th century.

The first road connection that connect Moscow and Irkutsk was built in 1760. This has cuased a great progress of the economy. Since a road is built, people could do business and trading easily. A lot of products were being transferred in and out of Irkutsk. Products such as gold, diamonds, fur, wood, silk were imported from China. This was the start of Irkutsk economy’s journey.

Baikal lake is the oldest and the deepest lake in the world. And the most interesting part is that, this lake is located within reach from Irkutsk. It’s located in the South-Eastern part of Siberia. It’s not just unique because of its age and depth, yet its water which is known as a  high clarity water. There are also interesting mysteries and myths surrounding lake Baikal that you should know for sure.

The flora and fauna that can be found here also varies, thus it’s declared as a UNESCO World Heritage Site, this is definitely one of the surprising facts of Irkutsk, best destination to visit that, even the world admire. Irkutsk will be one of the best place for you to visit if you want to get in touch with this legendary Baikal Lake, one of the places that should be visited for Russian holidays  with your family or loved ones.

Lake? That’s not the only thing that you could enjoy in Irkutsk and its surrounding. For you, mountain lovers, you can enjoy the peaceful scenery from the highest point of the Komarinsky region. It’s named after someone who used to explore Baikal Lake. The higest peak is literally 2090 meters above sea level. Now, it’s easier for you to reach this place, for there are a lot of touristic routes there.

Road was built at the end of 18th century, making it’s possible for you to climb and enjoy. Although you might not find a lot of vegetation, there are a lot of moss and lichen that can be found. You can also enjoy a lot of things to see such as Heart Lake, the emerald colored lake, deep canyon, and much more. It might be one of the beautiful places in Russia people rarely visit, but you’ll never regret your visit here if you got time. It might be rare, but once you go there and capture good photos, people would then go there as well.

It has a humid continental climate. July is the warmest month with the temperature of 18 degree Celcius, yet being the wettest month though the year. Between seasons there are quite a variety of temperatures that you might encounter.

If you’re planning your holiday to Irkutsk, make sure you know what season it is. Prepare your clothes to fit the season, so that you won’t end up with a terrible holiday just because of the weather. Make sure you bring comfy clothes that fit the weather just perfectly so that you don’t have to worry about getting cold or feeling hot. The right clothes, in the right weather could clearly make your holiday a lot more enjoyable.

Wood is one of the most dominant material used in most of the buildings in Irkutsk. Wooden architecture in Irkutsk was developed very well, though. However, the weakness of having wooden house is that it might caught on fire quite easily, it might even cause great fire that damage the house. This is why now they started to stop building with woods, even if the old ones are still well reserved there. Beside of its beauties, it’s also become the iconic of Irkutsk that amaze travellers and locals.

One of the main interest in Irkutsk is its museum and old architecture that will be enjoyed by those who love going around the town and looking at architecture and artsy things. One of the museum that you can try visiting is the Taltsy Museum. It’s an open-air museum of Siberian traditional architecture. As we have known, Irkutsk is quite known for its wooden architecture. This is one of the things that’s being shown in the Taltsy Museum, one of the most popular museums to visit in Russia. Make sure to fit this museum into your tavel plan and get there at just the right time.

Visiting a new place could never go wrong. However, it’s a lot better if you already found out surprising facts or Irkutsk, best destination to visit, before you go. These facts should give you a brief concept of what kind of city Irkutsk is. After you understand these facts, you should start saving your money, book a ticket, and make the best itienary before you fly to Russia. Have a wonderful holiday with loves ones here in Irkutsk.