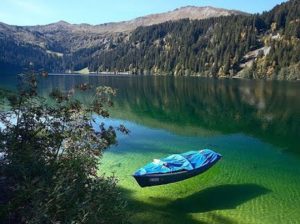 Lake Baikal is located in the southern part of eastern Siberia. The lake is also known as Ozero Baykal in Russian language. It lies between the Republic of Buryatia and Irkutsk oblast of Russia. Lake Baikal is known for the oldest and the deepest lake in the world. The Lake itself has formed on earth since 25 to 20 million years ago. It also has a maximum depth of 5,315 feet (1,620 metres). With its length reaches 395 miles (636 metres) and an average width of 30 miles (48 kilometres). Lake Baikal has an average area of 12,200 square miles (31,500 square km). It is one of the largest freshwater lake in the world in term of volume. With some of 5,500 cubic miles (23,000 cubic kilometres), it contains about one-fifth of the freshwater in the earth’s surface.

Lake Baikal is the start or the beginning from more than 330 different rivers across Russia. The largest mouth of river include Selenga, Barguzin, Angara, Chikoy, and Uda. The Baikal is among the clearest lake in the world. During summer season, the transparency of the water can reach its minimum volume. The minimum volume itself is only 5-8 metres. But, when winter is coming, the water transparency can get thicker and starting to freezes. There is an amazing phenomenon where large shards of ice that form on the surface of the lake. It gives the gorgeous appearance of turquoise ice. And during the winter, the grottoes on the shore of the lake will be fulfilled by amazing icicles. It happened because of the lake’s wave. Natural wealth condition, especially for its flora, around Lake Baikal provides its region for having rich oxygen.

Besides having a gorgeous scenery, enormous freshwater deposits, and other interesting things about Lake Baikal, it can also be utilized by the people. Many activities can be done around the area of Lake Baikal. The activities include tourism, fishing, hiking, or just for the people who wants enjoy the inner beauty of Lake Baikal. That is why Lake Baikal is still one of tourist destination. There are a lot of things to do around the lake.

1. Dark Rings That Found in the Middle of the Lake

Based on scientific opinion, it is possible that under the rings, there are some kind of gas volcanoes. This emitted warm gasses rises to the water surface and forming by its movement of underwater cyclone. This condition is warmer than the surrounding and creates the circles. The ice in that circles is thinner and is more saturated with water than other areas. Generally, this phenomenon was formed during the winter. The rings have 5 to 7 kilometres diameter and was found exactly at the same place every time we found it but didn’t appear every year.

Island of sunbathing seals seduce your wilderness-conquering fantasies. It was done by camping wild on thrilling cliff and secluded bays of Olkhon. Olkhon itself known as Lake Baikal’s largest inhabited island. You can also indulge yourself at Nikita’s Homestead in Khuzir and enjoy the few of Shaman Rock, island’s holiest site of Buryat. Driving the antiquated soviet army jeep to view the biggest of the Shaman ritual sites. At that place you can explore and spot some of Baikal seals sunbathing on the rocks.

This project aims to make the visitor feel or enjoy the beautiful landscape of Lake Baikal. The visitor will be asked to encircle Baikal with series of trails. You can choose to hike through the pine forest between villages of Listvyanka and Bolshiye Koty. The other option is to go through the fishing village of Baikalskoye to the Lake Slyudyanskoye. For the latter option, you will be directed to go through attractive cliff-edge path and will higher up your excitement. But from those options, there is still one path that will excites you the most. That part is the steep trail to the top of the Svyatoy Nos Peninsula. It has 350-degrees view across Lake Baikal and its islands.

4. Legend of Swimming In the World’s Clearest Lake

There is a legend said that if you ever swim in this lake, you will get five extra years of life. There is no proof about that legend yet, but still everyone around the world try to swim in this beautiful lake. It is one of the famous attraction in this lake. A lot of tourists come for this reason. However, you can enjoy the swim in many parts along the lake. The famous place to take into account is the golden sandy beaches. They were located along the northern shore of Olkhon Island. This place offers the shallowest and warmest water. Which is why it is crowded sometimes. You can also enjoy the long pebble beach in Severobaikalsk.

In the end of the year, especially around December, Lake Baikal starts to freeze. It is giving a change for people to do some activities on its ice. Hovercraft on the ice, ice fishing, snowmobiling, and ice-biking are the common sports in here. In Listvyanka, Baikal Dog Sledding centre offers tourist a dogsled rides through the forest. If you want to hike across the ice, the locals will set up yurts on the ice. That way, you can just break up the trek.

Winter is also a good season to visit the lake. Because, at some part you can even see the transparent ice on the surface. It is said that you can even see the base of the lake up to 4 meters. This is why some tourist prefer to visit the lake at winter. The transparent ice itself was created when a strong winds happen. The stromg wind will push the snow on the surface. And therefore mineralisation occur and yratranspar ice is created.

The short Circumbaikal railway between Slyudyanka and Port Baikal along Baikal’s southern tip will offer you a great experience. It will make you appreciate the complexity of engineering that made it possible. The steam engine works along the shore. You can count the number of bridges and tunnels created after years of blasting and chisselling through cliff.

That is all for 6 Most Interesting Facts About Lake Baikal that you need to know. The lake is still one of the most visited place for tourist destination. Not only its scenery, but there are also myths and legends that become a plus point on attracting people. Besides, a lot of activities can be done in Lake Baikal. For more information about places in Russia you can see articles provided in this website. Some of the articles include 6 Mysteries Surrounding Ural Mountains That You Must Know, Top 10 Stunning Tourist Attraction in Russia You Can never Missed, and 6 Coolest Places for Hangout In Russia.