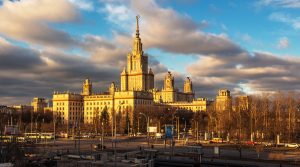 For international students, Russia is a great country to study. Russia has many respectable institutes of higher educations. Some of its universities ranked among the best in the world. Universities in Russia is standardized and accredited like most of the other European countries. Bachelor degree in Russia is a 4-year study while specialists degree takes 5 years to complete.

Tuition fees in Russian universities are relatively affordable compared to other countries. Apart from tuition fees, the cost of living in Russian cities is also low. Basic necessities such as housing for students is usually provided by the university at cheap rent. There are also various scholarships offered for international students. Know where to look for a scholarship, they are plenty.

Here is the list of 10 most favorite university in Russia for international students. Before deciding to study in Russia. Know basic information such as what city to live in and which study programs to choose. Study about Russian culture, climate, and weather. It’s also important to start learning basic Russian language.

Moscow State University is the most prestigious higher education institution in Russia. The university was established in 1755. It has more than 40,000 students, 4,000 of whom are international. Moscow State University is ranked number one in Russia in term of academic reputation. Therefore LMSE is also a number one choice here in our list of 10 most favorite university in Russia for international students. The university has 13 Nobel laureates. Notable alumni include Mikhail Gorbachev, President of the Soviet Union and a Nobel peace prize winner.

Novosibirsk State University is among the top 100 universities in physic and astronomy. In natural science, the university ranked the 63rd. The number of students is also small. The university has 6000 students in programs from bachelor, master, and doctorate.

Tomsk itself is also a comfortable city to study. Tomsk is a student city. With around 500,000 of total inhabitants, the student population here is estimated at 100,000. Taking almost one-fifth of the city population, the students are spread across Tomsk’s six state universities. As for Tomsk State University itself, there are 23,000 students, with 2000 of them are international students.

Also situated in Tomsk, Tomsk Polytechnic University is the oldest technical higher education institution in Siberia. The university offers programs in engineering, physics, mathematics, and other areas of applied science. All are spread in its 30 bachelor program and 36 master programs. There are 15,000 students studying here from 37 countries.

6. Moscow Institute of Physics and Technology

Moscow Institute of Physics and Technology (MIPT) is one of the most leading universities in Russia. MIPT education is divided into 12 departments, covering a wide range of knowledge fields in fundamental and applied science. But the most prominent here is in the area of physics and technology. The university has several Nobel prize winners. The university also has several Russian cosmonauts as their alumni.

Kazan Federal University is situated in Kazan, Tartastan, Russia. It is founded in 1804, making it one of the oldest university in Russia. The university’s most famous program here is Mathematics. The first rector of this university is the famous mathematician Nikolai Ivanovich Lobachevsky. Soviet leader Lenin was a student here too.

Another university in Russia focusing on engineering fields and applied science. The university offers bachelor, master and Ph.D. programs in these technical fields. Bauman Moscow State Technical University is the second oldest university in Russia after Moscow State University. Its inception was initiated by Empress Catherine II in 1763. Notable alumni include Andrey Nikolaevich Tupolev and Pavel Osipovich Sukhoi, the designer of Tupolev and Sukhoi planes, respectively.

So that is the list of 10 most favorite university in Russia for international students. Studying in Russia is an interesting experience. There is an endless list of universities to choose from, and many beautiful cities to live in. To begin the enrollment process, visit the official website of the university. Read the guideline and prepare the documents needed. Good luck!