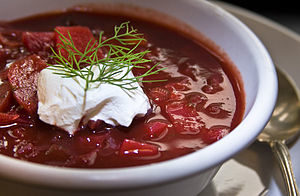 One of the countries in Europe you must visit is Russia. Russia became the largest country in the world whose area stretches across two continents of Asia and Europe. There is no doubt that Russia has a truly beautiful tourist spot. Such as Moscow Kremlin, Mount Elbrus, Geiser Valley, Winter Palace, Peter and Paul Fortress, Red Square, Peterhof Palace. There is Hermitage Museum which is a favorite of the traveler. But not only for the beautiful places, Russia also popular with their cuisine.

Russian cuisine usually consists of processed porridge, soup, processed meat, cakes, and others. For those of you who are curious about the typical Russian cuisine, the following recommendations are foods that you can choose when visiting there. These are some most favorite recipes for Russian people : See also Popular Foods in Russia During Winter

This is one of the famous Russian foods, even its popularity is quite high in other countries. Beef stroganoff in the form of sauteed meat cooked with smetana or sour cream. The creamy and delicious taste makes beef stroganoff favorite cuisine in Russian country of all time. Ypu may see also Popular Foods in Moscow During Ramadan

The next famous Russian meal is pelmeni. The shape may remind you of typical Indonesian dumplings, but this pelmeni has different flavors. Usually, pork, beef, lamb, salmon, or even mushrooms can become the content of pelmeni. Pelmeni can be eaten directly or served with broth sauce.

Blini is one of the traditional Russian food. Russians make blini from a mixture of wheat flour, yeast, and milk. The shape of the blini is similar with French crepe that has round and thin shape. Usually blini presented at the wedding or funeral ceremony. A woman who have just given birth are advised to eat this food.

Blini usually served with red or black caviar on it. As time passes, stuffing and toping are increasingly diverse. Starting from berries, raisins, smoked fish, meat, and much more. See also Popular Foods in Yekaterinburg

This typical Russian cuisine resembles a bakpau, and usually has the same stuff as pelmeni. If you visit Russia, you must try pirozhki. In addition to its delicious taste, its cheap and easy to find anywhere makes this one of Russia’s famous food favorite for Russian society.

If you want to find a healthy delicious meal, Olivier salads the answer. This typical Russian salad consists of a variety of vegetables such as potatoes, pickles, cucumber, peas, and eggs, which are then combined with sour cream or mayonnaise. Olivie’s recipe is very old. Lucien Olivier was discovering the recipe in Moscow in about 1860. This Russian salad consists of potato, carrot, pea, boiled egg, pickled cucumber, and mayonnaise. Pieces of bacon and dill leaves will enhance the oliver salad. See also Popular Foods in St. Petersburg During Ramadan

The next most favorite recipes for Russian people is borscht. As winter arrives, this Russian beetroot soup is sure to be the most fitting dish to serve while still hot. Taste unique, tasty and delicious make the borscht menu mainstay Russian citizens to warm the body in winter.

One more typical Russian soup that you must try is solyanka. This food has a sour taste and a bit spicy. Generally, solyanka content is fish, meat, or mushrooms. The flavour came from pickles, onions, Russian-style spices, and sour cream.

This is a popular type of acid soup in Russia. In Russia, almost everyone likes warm soup. Solyanka is a soup that contains fresh beef, or smoked beef and Russian sausage. In addition to meat, there is also stuffing fish, and mushrooms. This soup will be perfect with cucumber.

Golubtsy is a typical Russian country meal consisting of thinly sliced meat wrapped in cabbage. Its then steamed or boiled until cooked, and served with cream on top to make it taste even better. You will find this cuisine almost in every corner of Russia. Read also Popular Foods in Russia During Summer

Khachapuri is a crunchy bread. The shape is like a boat which the middle is given a half-cooked egg and some type of cheese (usually 4-5 types of cheese) are melted. Russian people usually consume this at breakfast and warmly.

Shashlik called Russian sate that usually uses pork. However, you can replace it with beef, goat, or anything to taste. This Russian native food is usually served with a variety of spices added red wine, vinegar, or pomegranate juice.

Potato okroshka is a soup made from buttermilk, potatoes, onions, and beautified with dill or sash fennel. This Russian native food has a unique flavor. Its is savory and tender, may be similar to cream soup.

Khinkali is a dumpling-like food or one of a kind of dim sum. Minced meat and cilantro filling this dumpling. . Although similar to Chinese food, this Russian native food has a distinctive taste of Eastern Europe.

Zharkoye is a food that is almost similar to home-based soup in Indonesia. This Russian native food is made from meat, potatoes, and carrots, with seasonings of garlic, parsley, celery, cloves, and dill leaves. This food is easy to make and contains lots of spices, so it is suitable to eat when the air is cold.

Knish is an inner pastry filled with mashed potato, minced meat, onions, and cheese. This typical Russian country food is very easy and commonly consumed in Russia, even you can find it easily in almost all regions of Eastern Europe.

Those are some most favorite recipes for Russian people. If you visit Russia, you should taste the typical Russian food. You may see also Popular Foods in Russia During Spring