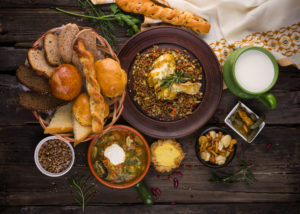 What are popular autumn foods in Russia? Food is a one of culture’s product. Nature also inspired people in making food receipt. The weather and season also affect to receipt of food. Since the old time, the food receipt is still practice and become a treasure of heritage. So what are the autumn receipts of Russian autumn foods?

Russia has four seasons; winter, summer, spring and autumn. We may find different food in each season. But, I bet, you will always find bread in the table. Why? Bread has special place in heart of Russian or you may not probably life without bread in Russia.

What I will talk in this article is about Russia autumn foods. You may travel to Russia in months of September, October, and November to see the autumn months. The weather is cool and changeable. You need to bring an umbrella because it often rains.

You might be surprised because the days of autumn season are far different to Indonesia. You will live in the shorter days and longer nights. This is contrast to Summer Solstice where the longest day and the shortest night of the year. But, what amazing here, you will see the birds which prepare to fly to the south. Like in other autumn season in countries, we can see yellow, red, brown leaves everywhere. It is very wonderful due to rainbow color of leaves.

In autumn, it is time for gathering harvest, hunt, fish, slaughter cattle and store food for the winter. For Russian, autumn is the most abundant season. The wedding might also set date in this season.

This season provides products. There are still a lot of fresh vegetables, meat, fruits, berries and herb. People go for fishing and procure a freshwater fish. They also hunt for birds. Yup, the food should be as rich and varied as possible. I might share autumn receipt and you might follow to cook in your kitchen. And also, write about popular autumn foods that might cook, stewed or baked in the autumn.

As mentioned before, there are a lot of vegetables in autumn season, such as cabbage, carrot, and pumpkin. In the autumn, people start to ferment the cabbage. It is the best season or heaven for vegetarians to visit Russia. The vegetable are fresh and delicious. Those are farmed on private land.

By those vegetable, they make varied of food, such soup. In Russia, you may find two kinds of soup; cold and hot. In cold season, hot soup is served to warm the body. In contrast, cold soup is served in warm season to cold the body.

Autumn is best time to go to fish and hunt. Bird and fish are the favorite. They prepare to store to winter season.

Mushroom is one of favorite food in all season. In autumn, people collect mushroom in large quantities and different varieties. Dishes in autumn are made of mushroom. Mushroom may cook the mushroom by stewed and fried. They also add the mushroom into the soup, pies and pancakes. Mushroom is also cooked to store in winter season by pickled and dried.

Burger is made from potatoes. It mixes with beef, red onion, salt and parsley. The potatoes are baked. In the serving, mayonnaise or ketchup is added to give more taste. It will make you more enjoy in the autumn in Russia with receipt of autumn foods.

Lobster and chicken wings are the option to cook in autumn. Both of them are cooked in oven and added by special ingredient. Those are super simple dish to make.

Chicken wings or called as Buffalo wings in Russia are enjoyed in a tasty sauce. The taste of chicken wings is sticky, sweet and tender. Lobster is oven with mustard, mayonnaise, olive oil, salt, and pepper. It best serve in hot.

Solyanka is made from fresh or sour cabbage. Solyanka is called as Russian stewed cabbage or Russian braised cabbage. The cabbage is mixed together with smoked pork, mushrooms and herbs.

Not only mushrooms, but also people marinated tomatoes in Russia. This is popular method to preserve the harvest of tomatoes product. You will also find also the taste of pickled tomatoes is mild and pungent. The best tomatoes are small and varieties of firmer.

Whatever the food, the herbs always take important position in Russian autumn foods. It added by spices to give more taste.

We might not forget to mention any drinking. Black tea is one recommended drink while enjoying the autumn.

Chai latte is a most high street coffee shop. But, it much better create at home. The ingredients are black tea, milk, cinnamon stick, anise, clove, sugar and cardamom pods. Boil all those ingredients and serve in small cups. Drink the Chai latte while it is hot.

Autumn is an abundant season for Russian. It is time to go to harvest, hunt, fish, and store food for winter. Russian also has special food in autumn foods. Fresh and sour vegetables are the heaven for vegetarian in autumn foods. Mushroom and tomatoes also gives color in Russian autumn foods. Pickled mushroom and tomatoes are the best to serve. Whatever the food, don’t forget to drink black tea and Chai latte. And whatever the season, soup is best to serve, whether in winter or summer, whether cold or hot.