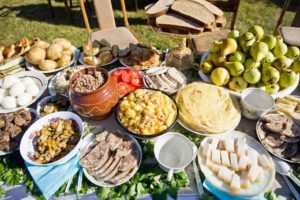 pring food for Russian people. Spring season has give spirit of life to Russian people and spring foods. Why? The weather in spring season is warm. The trees are green in the street, parks and yards. The rains may fall, but as usual the sun shines brightly. The most beautiful are the birds returning from the hot countries and make their nests. The spring months in Russia are March, April and May. The spring also inspires the Russian to make traditional cuisine or spring foods. I might resume into 8 Famous Spring Foods in Russia.

The new fruits and vegetables are coming to the spring season into spring foods. So, the Russian people get into the kitchen and starting to cook. In spring, Russian people always ate the greens, such as young onions, garlic greens, parsley, parsnip, celery. They make soup with full of vegetable. They are also added mushroom into the soup.

In every season, Russian culinary is interesting to discuss, starting from soup, dessert into the drinking. For example “The pancake week” is organized every spring to celebrate the sun and the end of winter (Read about Bread Riots – a revolution movement due to food scarcity in winter).

Every food has their story and sign of tradition in Russia, and some is preserved through the festival. Smelt festival for example, people enjoys eating the smelt fish in the St. Peterburg. And it becomes the attractive festival to attract the tourist come to Russia, especially in May of the year in spring season. Here are famous spring foods in Russia;

1. The Pancakes Week in Maslenitsa Festival

The pancake week” is organized every spring to celebrate the sun and the end of winter or farewell to winter and welcome to spring. The existence of pancakes is very special in Russian spring food. It is a very old tradition where consider as ritual food and started since the pagan. The Pancakes give meaning as the birth and death, like the farewell (death) of winter and welcome (birth) of spring.

Blini is a traditional Russian pancake. It is thicker than a crepe. It made from wheat. Blini are also served in rolled with variety of fillings such as jam, cheese, quark, butter, caviar, sour cream, onions, or chocolate syrup. In the Maslenitsa Festival, Blini have important part as to celebrate the welcoming of spring. Blini can be eaten with cheese or salmon, caviar or Smetana. Blini are sold as a snack in street kiosks.

And why did call as seedling soup? It is because they use the remains of vegetable seedlings to make soup. But, during the lent, they cook water or mushroom broth into the soup.

It’s kind of Russian ritual dishes during the celebration of the Resurrection of Christ. Just like Easter egg, the people don’t eat the egg, but they coloring it (colored egg). They also cook pastry in the ritual celebration.

The Easter cakes are traditionally cooked and present at Russian Orthodox Easter. They eat the cake to break the fast.

Russian people always collect the birch sap by tapping in spring. They directly tap from birch trees. The Birch juice may consume both fresh and fermented. It’s a kind of traditional beverages.

The fresh birch juice is clear and uncolored liquid often slightly sweet with a slightly silky texture. In other side, after fermented for two or three days, the taste of Birch juice becomes more acidic.

Shchi is a variant of soup with light transparent soup in Russia. We may call it as Russian style of cabbage soup because the base is cabbage to make the soup. In spring, the soup is made with new and fresh cabbage. Shchi has fresh and delicate flavor.

Why is cabbage inside the soup? Cabbage is put in the number one of soup menu and considered as valuable foodstuff for Russian. Cabbage also contains salts, potassium, phosphorus, and sulfur, vitamin C.

In any case, they added meat (fish or mushrooms), carrots, basil, onions, celery, garlic, pepper and components that have a sour taste like smetana, apple, sauerkraut, and pickled water. Serving with bread is the way to consume Shchi soup.

Beet soups are made from beet tops. We may find beet soup from early spring to the autumn. It has delicious taste. If you try to search the receipt of beet soup in search engine, you might probably find a hundreds of beet soup receipts, for example is the variation of beet tops with Coconut, Ginger and Lime.

In spring, it is easy to find traditional Russian fish smelt. Smelt is a little fish and found in the Atlantic and Pacific Oceans. Every spring, the air of Russia, especially in St. Petersburg fill in fried smelt and fresh cucumber. It’s easy to find seller of smelt. Only follow the smell of smelt and cucumber, you will find the source, it is serious.

In St. Petersburg, smelt is the local delicacy from March to April.  In there, every May, there is a smelt festival, so the local and tourist can enjoy the fish. The smelt festival also has function to unite its inhabitants around a long-standing tradition.

The food of Russian in Russian is coming and made from variations ingredient or directly tap in trees like Birch Juice. The cabbage as the vegetable has special point in the lists of the Russian soup. Fish in the sea like Smelt become delicious food for Russian in spring foods. Nature give beautiful and its natural source to Russian people.