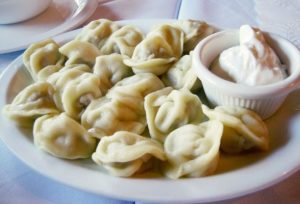 Pelmeni is like a dumpling with a certain stuff wrapped in thin dough. This Russian dumplings are usually served with sour sauce. Pelmeni content is generally minced meat, fish or mushrooms. In addition to Chinese dumplings, pelmeni looks like a vareniki from Ukraine and a Polish pierogi that filled with mashed potatoes, cheeses or berries.

The easiest way to distinguish them is from the shape and size. Pelmeni have almost circular shape and the diameter around five centimeters. For the other forms, Pelmeni are usually more elongated and larger. The stuffing pelmeni no sweet like vareniki Ukraine. Another distinctive feature is pelmeni can be frozen for a long time. Although frozen, Pelmeni hasn’t to lose quality or taste. Even pelmeni boiling water can be a soup. In Siberia, these dumplings are left frozen in the open place and preserved through the winter. The hunters love pelmeni as nutritious and easy-to-prepare meal. They took Pelmeni along the winter trip. 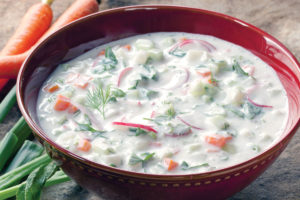 When the weather is warm, the Russians usually eat okroshka. Okroshka is a cold soup made from kvass or sour milk. Okroshka is also a salad. The main ingredient is two types of vegetables that can be mixed with meat or cold boiled fish. This mixture of vegetables and meat is in the proportion of 1: 1.

The first type of vegetable to be used is one that has a neutral flavor, such as boiled potatoes, turnips, carrots, or cucumber. The second type of vegetables should be spicy, such as onion, herbs, parsley, celery, and others. For the finishing touch, added cream made from boiled eggs or smetana that is heavy cream. 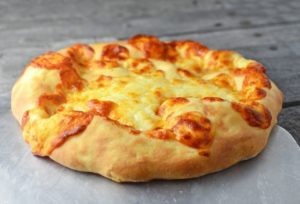 Shangi is a typical Russian food containing carbohydrates. This is why Shangi is a staple food in Yekaterinburg. Shangi is tasty bread, similar to pizza. Shangi has toppings of potatoes pounded with butter. Other toppings can be cheese and kasha.

Kasha is a kind of mush in Russia. In addition, Shangi also can be topped with sour cream and melted butter. This savory bread is usually served with warm tea. You may read also Halal Restaurant in Moscow 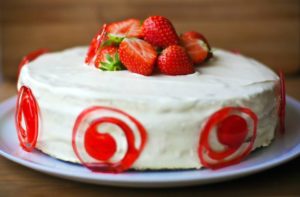 The other popular food in Yekaterinburg is First Lady’s Bird Cherry Cake. Bird Cherry fruit is one of the fruits that thrives in the Ural region. However, this fruit is not widely developed in other regions of Russia.

Bird Cherry becomes the basic ingredients for making sponge cake. This bole cake is called First Lady’s Bird Cherry Cake because the recipe is written directly by the first lady. The first lady in 1991 was Naina Yeltsina, wife of President Boris. 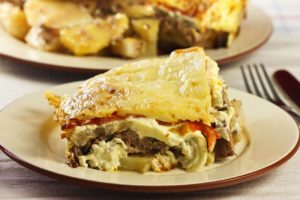 Kurnik means ‘chicken coop’. It’s a delicious Russian chicken curry, with boiled rice and eggs, and a dense vegetable and chicken sauce. Kurnik is a thick dough containing chicken, eggs, and mushrooms. Then baked until the contents are hot and produce an appetizing vapor.

A round egg has a symbol of immortality, wholeness, and fertility. That’s why Kurnik often becomes a dish in big celebrations like weddings. Making Kurnik becomes an exciting thing for children. They are usually happy to make varying layers of kurnik coating.

In addition, they are free to print various forms of pastry to decorate the top of pie kurnik. 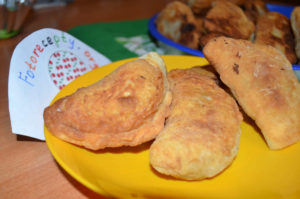 What can you eat at Perm for lunch after a walk? You will find a variety of dining options. Ranging from fast food kiosk to fancy restaurants.

However, the best way to feel the local atmosphere is by tasting local specialties. One of the traditional dishes of the Urals is posikunchiki. It was a fried pastel containing minced meat and onions.

This food looks like a small version of chebureki (fried meat). This delicious snack can be found in various places in Perm area. Read also Popular Foods in Moscow During Ramadan

Mors is a popular drink throughout the year. But in summer, this drink is more special because it can be made with fresh beri. Drinks made from bunis are popular since the Middle Ages.

Mors are made from cranberries, blueberries, raspberries, currants, or cherries. To make it, dry the fresh fruit from the juice by using a sieve. Then, boil the remaining fruit skin with sugar. When finished, pour into the juice that has been separated before. Natural mors can last a week if kept in a freezer.