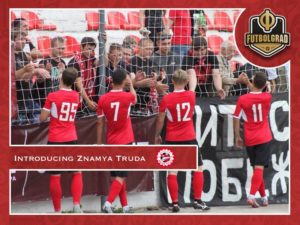 Every football club have their own history . And so for Russia. There a lots of club who played in Russia and play for different league. From lower to top tier club, they compete each other to bring the glory for the fans and the club. The one is really bright , the others look off-colour. For a long time ago, Russia already has the competition even before the USSR collapsed.

Pretty much, aren’t they?

Over one years later, the club didn’t make good expectation even the legacy of the oldest football club in Russia. Znamya Truda has been down over and over, the even played in amature football division.

2. Have the worst statistic ever in Russian football history

With such a long age of the club, Znamya must have a good things to share. But I promise you wont impressed with what I share. They have been called “ Russia worst football team”. It comes from the bad statistic they have. This football name has the name translates as “ The Banner of Labour” . They were the first champions in Moscow and the most brightest things they ever had was reaching the final of the USSR final in 1962 – but losing by 0-2 to Shaktar Donetsk in 104,000 pair of eyes.

After the event, the club surprisingly have the worst achievement they ever made. Since 1990 until now Znamya Truda have played in Russia’s regional FPL (Third tier level competition) with over and over staving off relegations rather than comeback to FNL, and after the final fight , they go down without good fight. Beaten by 0-6 , 0,7, and 0-8. Big big loss.

3. Money is the club biggest issue

You can’t deny that money takes important role for any football club. It’ll guarantee you good situation and condition if you have sufficient money to spend. The club find that they don’t have enough money to compete every season they have. Mishel Sveliev, the captain of the club once said that they have the small budget, even the town council fund them. Imagine big club like Manchester City were bombed by billions of pounds, not difficult to build best team like now. He’s confirmed that their team just had small salaries and they have to get sidejob to survive for the life.

The owner of the club also confirmed the situation. Oleg Andreev said that every year, the problems of the club remain same. No one wants fund this club and they only had the budget from local authority. So sad, no sponsor, no good. Not only that, the saddest thing they ever received were the fans just mockering over and over, without showing any symphaty.

Without proper money, don’t ever think to talk about the club’s future. They don’t have the plan , they hope they can stay in FPL, rather than think to go back to FNL. C’mon, they just need banking and right players.

Because of lack of money, the club cant pay more money for the salary. So they just come sith the plan, why we just use young player so they have chance to play? So here they are, they use local youngsters from football clubs to play, and somehow survive for this time.

4. Have the worst football accident in Russia History

For me, inspiration to writes 5 facts of the oldest football club in Russia were comes for this. In 2004 Russia will remembered the year of the Russian worst football accident. Four players and five members of the staff were dead when the club bus was got high speed crash on the way for the game. It was difficult to describing the scene, the stands were overcrowded, the fans were sobbed, they were sobbed for the ones who were taken away.

On May 27, the club had been travelling by the bus for a match on the west side of Moscow in Skolkovo. In the highspeed runway, the vehicle collided with a wayward lorry, resulted with catastrophic result.

A memorial to those who died from the collision now stands outside the stadium. This will reminds every single hero who died. Everyone will remember the players and the staff as heroes for their city.

100 years ago, the town was a major center for the textile industry and its mills. It was really good for their society to keep growing and plays vital role for city’s revenue. Now, after 100 years passed, it was abandoned and decaying, worked under the hands of English management. For the people who lived in here, almost 120,000 inhabitants were taking taking low-rise salary for work. They just work for their lives, not much.

The owner, fans, and the staff were had no end to revive the club. Some argue that club should be put in private hands, with potential of good support of money. They miss to overcrowded the stadium. Now what will they do is good- using social media to encourage the fans around the city. They want to share the historic value of the club, and make sure everyone always remembered the day of the tragedy, were their heroes still stands in their heart. The taxi will brings you to the St.George, where they built the open –air history of Znamya Truda. Its displayed the photograph for the fallens, boards, and the club’s existence . The church were build to commemorate those who lost their lives after the collision.

So this is it. 5 facts of the oldest football club in Russia. Not a good fact I think. But this always reminds me of the greatest legacy of this club. With the existence of this club one century ago, it encourages others to create other football club and compete each other. After the club, one by one another club start to growth and play big role for the country – Spartak Donestk, Zenit St.Petersburg are the example. So, why don’t you go to this place if you have leisure time one day? This town will reminds you the birth of the Russian oldest football club . Hope you are enjoy with my articles, stay in touch for the other story and always have a nice day wherever you now! See you lads!