Since Russia becomes host of the FIFA World Cup 2018, the country was busy to prepare everythings they have to entertainment the contestants and the supporters all around the world. From roads, restaurants, public facilities, and of course, the fields, were prepared for the best experience when you visit the country. From ground to building, from demolition to rebuilding , here are the 5 new stadium in Russia. Lets have a seat and enjoy 5 new stadium which will make you  surprise with human’s new  creation. 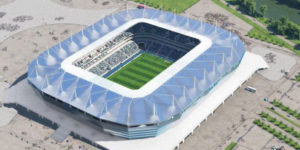 The concept of Kaliningrad stadium was based from the famous home of FC Bayern Muenchen, the Allianz Arena. Located and bordered between Lithuania and Poland, this stadium faces the Baltic Sea and the most westernmost destination of the tournament . This arena hosted four games of the 2018 FIFA Wold Cup.

The placement Kaliningrad, as well known as Arena Baltika makes the engineers dilemma . The land, Oktyabrsky Island proved difficulty location. Because of the wetland grass, the land doesn’t offer the perfect foundation for major structures. But as the work still continue, the financial problem comes for the main concern .

Its getting worse when the company which responsible for the project were bankrupt four years ago. The government still has a plan and make sure that the Kaliningrad is ready for the World Cup.

After the world cup, the government would cut the capacity of the venue to 25,000 . After the events, the Kaliningrad will become the home of the FC Baltika, which have not played for the top Leauge in Russia for decades. As the solution, this arena will host not only for football. Concerts , cultural and major events are takes place here. For further development in Oktyabrsky Island, the place will takes profit from residential development including parks, riverside embankments and so on. 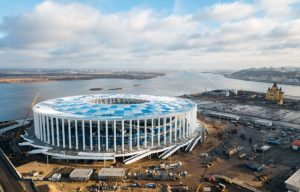 The Nizhny Novgorod is one of the 5 new stadium in Russia. The stadium was beginning the project on March 2015, designed specifically for the tournament. Just like any other stadiums, the Novgorod offers simply beautiful style while it located attractively by two major river: The Olka and the Volga river.

It overlooks overlooks Nizhny Novgorod is stading on the opposite river. The architects follows the classic of white, azure, and blue palette which represents the nature of Volga and Oka river. The stadium was finished on April 2017 when winter arrived. Located about 420 miles west of Moscow, what will you see in Nizhny Novgorod is not just the river.

The architects brought nice ideas with slim pillars supporting from outside and exposing a semi-transparent façade, too beautiful to miss it. At night, the circling side of the stadium is highlighted with illumination. But that’s not enough, when you have a walk near the building, the most eye catching in here is the 500-year-old the Nizhny Novgorod Kremlin landmark as the protagonist role in the city.

The arena becomes home of FC Olympiets after the World Cup event, since it have the same characteristic as Kaliningrad- the club is B grade club. Although the arena was designed for football event, the building still support any others event as for the country’s other revenue.

Like others Russia’s host city, Nizhny Novgorod will host to the following matches : Sweden vs. South Korea on June 18, Argentina vs. Croatia on June 21, England vs. Panama on June 24, a round of 16 match on July 1, and a quarterfinal match on July 6. 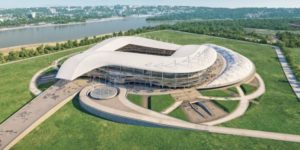 A brand new facilities located on the left bank on the Don River, this arena is 350 miles north of Sochi. Rostov Arena will attracts locals and visitors to Rostov-on-Don as one of the host city in Russia. Like any others Russia’s venue for World Cup 2018, the Rostov has suffered not a good start at the beginning. Construction began at the end of 2014 and just about done by December last year – seven months after the originally completion date.

Rostov arena is simply notable by its roof, which represents the meandering of the river. The contruction of the Rostov were downsized after the government think the original project were judged too overreached. Despite the Russia still want to save the money, internal source suggest to reduce product cost only 15% less than had been planned for good sake.

Rostov Arena is the home of FS Rostov, the 2014 Russian cup winners. The club maybe has similar story with Leicester FC- winning the title of Top Russian League 3 years ago. After the world cup, the original capacity will reduce by around 5,000 seats. The stadium will have a major development of Don’s left bank – restaurants, shops, and business premises will planned after the world cup 2018 end.

This new stadium is scheduled to following matches : Brazil vs. Switzerland on June 17, Uruguay vs. Saudi Arabia on June 20, South Korea vs. Mexico on June 23, Iceland vs. Croatia on June 26, and a round of 16 match on July. 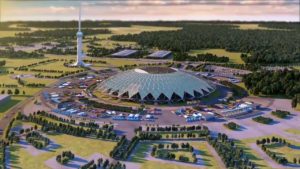 What will you think about this Russian’s new stadium ? Maybe space or Yuri Gagarin will first come to your mind.  This new home of the FC Krylia Sovetov Samara is located in the sixth-largest city in Russia, surrounded by a residential development and a very good quality infrastructure. Just like the name, the Samara – or well known as the Cosmos arena’s design concept is dominated by the theme of the space.

The construction for Samara were not running smoothly. The projects has been controversial locally and it was moved from original plan after heavy criticsm. The stadiums takes more years delayed from the original plan – of course rising the production cost and need to dowscaling of the dome from 80m high to 60m.  After couple of years, the stadium is finished and its worth-pleasing to the eye.

The Samara is the one of the new striking venues for the tournament. The arena has the 65m high glass dome, which offers spectaculars view when litting up at night.

Samara arena will host the following matches : four group games , round of 16 match and a quarter final. 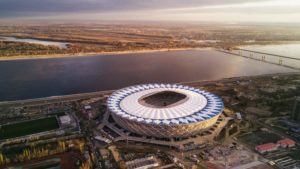 Last but not least , we have Volgograd Arena as one of the 5 new stadium in Russia. After the world cup, Volgograd will become the home of the FC Rotor Volgograd, one of the top three in Russian Championship at the previous year. The stadium is located at the industrial city of Volgograd – 600 miles southeast of Moscow. It replaces the previous stadium-the Central Stadium which was demolished in 2014. The construction began in 2015 and the result is very different both interior and exterior from the previous arena.

Combination of the new ideas resulted a light, airy feel that fit in with the tourist. This new stadium offers comfortable for any supporters around the world. The capacity of the arena will drop for 10,000 seats after the event finished.

The new stadium will host the following matches for 2018 Russia FIFA World Cup : Tunisia vs England on 18 June, Nigeria vs. Iceland on 22 June, Saudi Arabia vs Egypt on 25 June , and Japan vs Poland on 28 June

That’s all you need to know for 5 new stadium in Russia . I think Russia is a great destination to visit and offers both great facilities and the culture. We will make another stories for you about Russia so stay tuned!