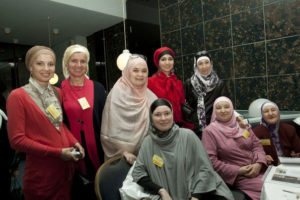 Have you ever dated any Russian woman ? If you have, so how is you impression about her ? Don’t forget to also know about the interesting facts of the women in Russia.

Still talking that related to the woman, how do you think about Muslim women in Russia ? Let’s talk about the women whose Islam religion in Russia since Islam has been the second largest religion in this country, after the Orthodox Christian.

Without knowing the exactly reason, but somehow Islam expansion in Russia has been often related to the terrorism since years ago. Since the begining of 20th century, the terrorism has been such a tool to interfere the political, social, and economic system. The goal of action terrorist is the implementation the ideology or the sake of business of any odd group.

To reach the goal, the terrorist create the fear among the civilianz by the violence. For example, the violence is such as the suicide bomb. This action keeps going on in Russia because of many people has their brain washed with the radical things and somehow through this bomb, the other people, especially the Russian Musslim Women, avenge the death of their family, either their husband, brother, and father. Unfortunately the terrorism action often cause the Muslim Women in Russia becoming a black widow.

While the Muslim culture in Russia is being spreaded more widely day by day, now the muslim population in the capital city of Russia–Moscow, has been reached about 16% among all of the population in Moscow. Then, based on a journal, several Russian Muslim Women in Moscow make the plans with similar goal which is The Revolution of Islam perspective in Russia. They got some many optional plans to achieve the goal. The plans are ranging from being music composer until fashion designer.

So here is the explanation about how Muslim Women’s action to reach their goal :

They also have the traditional culinary from Russia, but still according to the Islamic Law – Halal is a must in the way of cooking and also the ingredient of the cuisine. No more use of vodka or any alcoholic drink in the culinary like what the most Russians used to eat it. The Russian muslim women still baking and consuming any bread or the other stuff in case of the Halal ingredient use. By the way still talking a little more about bread, you might want to know the meaning of bread in the most aspects of Russians’ life. About the Halal cuisine, it is not about the consumption of the Russian muslim women, but also about how it is served by the women, especially for their father, husband, children, or the other Muslim family.

Anoher way to spread the Islamic lifestyle can be done through charity event. The Russian Muslim Women invites the celebrities and other public figures in order to make many people, especially the youth, want to join the event. So that, the Muslim Women can persuade people to do the goodness, especially some things related to Islam culture. They can also ask donation from the audience, then the donation will be used either to help poor people or hold other good events in the future.

There are still many ways of Russian Muslim Women to expanse Islamic culture. For example, as a music composer, the woman can improve and break the Islam stereotype in the eye of Russians. Moreover, how the Muslim women’s attitude in Shariah Islam according to Al-Qur’an and Hadist is a way to let people know better about Islam as a beautiful religion without any taught of violence at all.

These actions of Muslim Women in Russia also become the way to redefine the image and to establish a better relations with the society. Meanwhile, the Muslim population and the other civilization whose different religion can live side by side peacefully, however because of the association of Islam culture and the terrorism still in the most perspective, so that the Muslim population is well-known as “the enemy” in the eye of many Russians. Then how the Russian Muslim Women do, can make up the situation into the better one.

They keep encouraging the fashion designer to be as innovative as possible to create the Muslim Women’s clothing becoming more fresh and beautiful fashion to attire in many circumtstances, either for work, daily life, or the party. Because of this Islamic style festival, the Russian Muslim Women can attire hijab which cover their head to toe beautifully. The feminity and good temper from their soul also can be demonstrated. This is a good chance for the Muslim Women in Russia to spread the modernity in Islamic rules, with all of do’s and dont’s that is determined by Allah.

The coverage of themshelves by hijab in order to obey the Islamic determination from Allah also offers another alternative option for the western Muslim women’s clothing. How the Muslim women’s fashion style educates other Russians about wearing clothes well and trendy, without “too tight and bright”.

The style becomes a refletion of Russian Muslim Women that they are well-educated. In other way, it also shows that the Russian muslim women being open and active in their society. Moreover, they are able to solve all spheres and problems, too. The Muslim Women in Russia keep shining like a diamond without any desire to show off their beauty.

Here is how the life of Muslim Women in Russia is. Especially all aspects of life that related to Islam culture.