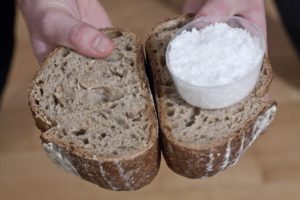 When you become a visitor or tourist in Russia, your friend may be serve you by Bread and salt. It is nice to travel to Russia and taste the one of historical food in Russia.

That is black bread and wheat bread, may called as the national bread of Russian. Both breads have story and symbolism in the life of Russian people. Here, are some facts of bread and salt in Russian Traditions;

What is Bread and Salt?

One of Russian tradition is serving bread to every meal, most often is black bread. Black bread is made out of rye and has a pleasant taste.

Talking about bread and salt, it is also taking about person of Russian due to its history of Bread and Salt. In old time, the bread and salt would present when the emperor or empress visited their towns. It presented by the merchants and gentry. This is as sign of hospitality.

Dou you know that Bread and Salt is a tradition of welcome greeting? If you answer yes, that is the correct answer. Bread and salt are symbol of welcoming ceremony for countries such Slavic and Russia.

Meaning of Bread and Salt symbolism

Just like an Easter egg, the Bread and salt also has symbolism for Russian people. Why bread and salt? The foods always symbolized the most important food for the people. Bread for Russian has meaning as abandoned and wealth, and the salt means the protection of evil. It has believed by people since the ancient time.

The tradition of Bread and Salt appeared in Russia long time ago or this custom is very old. In the “Domostroy” written source, explained, the custom is presented during celebratory event and mourning.  For Russian people in the Middle Ages, Bread and salt also symbolize as peace when the enemies shared Bread and Salt, means they would become close friends also believed.

The Bread and Salt at Ceremonial Welcome

Today, bread and salt also presented when important, respected, or admired guests arrive. It is similar to dayaknese traditional welcome in Kalimantan, potong pantan, Russian people symbolize the bread and salt as ceremonial welcome or greeting welcome and is one of the oldest Russian traditions.

As in welcoming ceremony generally, the guests are greeted by young woman in a traditional costume while they bring bread and salt on a tray. To offer the guest, bread and salt meant confidence and friendship. And if the guest refused, it means a real insult.

So, what does the Bread and Salt tradition symbolism means? The bread and salt tradition means of hospitality due to the bread are the most respected food in Russia and the salt mean long friendship. It is associated to a Russian saying “to eat a food of salt (together with someone)”. Historically, the Russian Empire when visited towns, they had a high salt tax. And then, it makes salt a very expensive and prized commodity.

The Bread and Salt at Wedding Ceremony

Who does present the bread and salt at the wedding? If you have read the article titled Bread in Russian culture – history why Russian respect to bread, you will know the answer of the question.  The answer is the groom’s mother and the family. Where does it takes place? off course, at family house. What is it purpose to? it is purpose to greet the bride and groom. What does it mean? the bread symbolize that the bride and groom are ready to move in to new home or in to live.

How is the ritual of Bread and salt? First, it is placed in the banquet hall. After that, they break off the bread and dip the piece of bread in salt. In the last, they give the bread to each other.

The Bread and Salt at Funeral

Bread also served in the funeral ceremony, such as state funerals of the most senior political and military leaders. Karavay – one of bread varieties in Russian – the bread is specially served at wedding and funeral. The bread is decorated with sculptured and baked flower. And, it means a great pity.

Death is a part of life to the Russians and served the bread at funeral means a great pity. Black bread is also presented at funeral with vodka. The mourners were not embarrassed to laugh a little as well as to cry freely, it is not a taboo. The mourners who visit at funeral are expected – simply like a must and to respect – to wear dark clothing, formal clothing and send only flowers. The dark clothing means to prevent the dead from returning.

When you visit to Russia, you may find bread and salt in your table. Never try to refuse, or it means an insult. Bread and Salt is one of the oldest tradition and kind of greeting welcome toward the respected, admired, and important guest. Eat the bread and salt, means friendship.