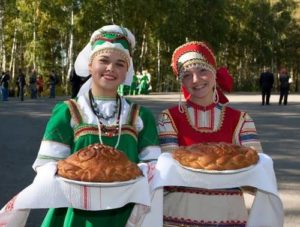 Food is also written the history of a nation, for example bread in Russia. It is also has symbolism for a country. The bread was born in the times when the blockade of Leningrad is happen. In that old time, people didn’t have enough food. Then, by little piece of bread, it could save the life.

In a memorial for example, the food also become the reason. Bread Riots in Russian, become the reason why did the event happen in the a hundred years ago. On February 1917, the people protest to food shortages or food scarcity and it become revolution to abdicate the government at that time.

Bread is a kind of food. Bread is also product of agriculture. We may find the product of bread in many countries in the world with variation of shape, taste, ritual, symbolism and definition. We probably say that bread has its symbolism. This comes from the history or story of it, such as Bread Riots event in Russian, as the revolution.

In Indonesia, we know several breads made by the local product of agriculture. Cassava, especially for Javanese, people made variation of foods. Roti Buaya (Buaya or crocodile bread) in Jakarta, capital of Indonesia, has symbolism as the loyal; it serves at the wedding. It hopes the bride and groom may live happy ever after together.

But in Russian especially Bread in Russian Culture, Russian people respect to Bread. They may not probably live without bread. They also serve bread in their table.

Just like Easter egg, which symbolism as new life. Bread in Russian has symbolism of it. Here, are some facts about bread symbolism in Russia;

The Symbolism of Black Bread

Black bread is a kind of cultural force for Russia. Why? People believed that black bread give strength to the farmer and army. They also believe by the nutrition contents of black bread, – 30% more iron and 1.5-2 times as much magnesium and potassium than white bread – prevents to diseases of malnutrition and more nutritious than white bread. The rye – the black bread made from – grows better in the colder Russian climes.

The Symbolism of Wheat Bread

The Symbolism of Karavay Bread

Karavay is one kind of traditional round Russian bread. The bread is served in various events, such as wedding, funeral, and birthday. It symbolizes many things, such as pity, prosperity, faithfulness, happiness, and affluence.

The Symbolism of Bread At Wedding

The Symbolism of Bread At Funeral

Death is a part of life to the Russians and served the bread at funeral means a great pity. The people decorated with sculptured and baked flowers, as well as branch woods and swags. And it also contains numerous ritual symbols. One of the bread that served at funeral is Karavay – traditional round bread.

Black bread is also presented at funeral with vodka. The mourners were not embarrassed to laugh a little as well as to cry freely, it is not a taboo. Mourners are expected to wear dark because wearing black clothing means to prevent the dead from returning.

The Symbolism of Bread At Welcoming Ceremony

The Symbolism of Bread At Birthday

As in other countries, Russian also has birthday parties’ tradition. Birthday party usually happens at weekend. Why? The reason is most people are free to attend. Then, how about the date? Russian people don’t mind scheduled their birthday party either for the exact birth date, or a little after it. But, the people believe, they are forbidden to schedule their birthday party before their date. Why? It symbolizes as hubristic and bad luck.

Karavay bread is not only served at wedding, but also at Birthday, especially in child’s birthday. The karavay bread symbolizes the happiness and affluence.

The Symbolism of Bread in Harvesting

Bread is product of agriculture. By the large of harvest, the country’s export potential also increase. They do festival in the harvesting time when the harvests were done by hand with scythes. We may find an ancient symbol in the festival. The wheat sheaf symbolizes as plenty, a good harvest, fertility, and even resurrection. Hope as the seasons cycle has once more given grain for bread.

The Symbolism of Bread for Peace

You may have read the Bread Riots, the movement which have slogan of “Peace, bread and land” in 1917 by the workers. The main reason is food shortages. The food, especially bread has pushed them to do a movement and begins the revolution.

In short, the symbolism of bread for Russian people is reflected in various aspects, starting from wedding, birthday, harvesting, peace and funeral. It has different meaning of symbols.