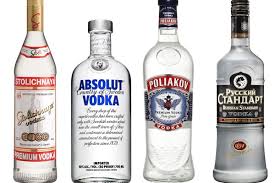 Vodka (from the Slavic word ‘voda‘ meaning ‘water’) is a type of highly alcoholic drink made of fermented grains or potatoes, sometimes mixed with artificial flavoring. Depending on the origin, the alcohol (ethanol) percentage of a vodka is usually 40 – 60% of its total, but the classical Russian vodka usually contains 38%, rounded to 40% for easier tax calculation.

Vodka contains very little fussel oils, and the fact that it was filtered made vodka one of the purest alcoholic drinks in the world. This drink is highly popular in Russia for celebrations, conversations, rituals, gifts, or simple pastime. Here are 5 facts about vodka that you should know.

1. Vodka is NOT from Russia

Nowadays, the modern world associate vodka with Russia due to its heavy use in many occasions. However, the first vodka was made in Poland, in year 1405, recorded in the Akta Grodzkie (recorder of deeds), in the court documents from Poland, and it went on to become a popular drink, medicine, and scented aftershave.

It was more common as a sexual medicine, or according to Stefan Falimierz “to increase fertility and awaken lust.” Early productions were limited, and each production need at least three stages of distillation. The first distilate was called brantówka, the second szumóuka, and the third okowita (or aqua-vitae)

The third distillate, known as aqua-vitae (water of life) would later enter Moscow, presented by Italian ambassadors to the Grand Duke Dmitry Donskoy as the vodka prototype. Later, a way to better distillate ingredients for the drink, at this time known as ‘bread wine’, was found. Due to the monopoly of this distillation secret, the drink would become closely associated with Moscow until the Industrial Revolution made the drink available to lower classes.

2. Vodka was banned at one point

On July 1914, a tsar’s decree prohibits the manufacture and sale of alcohol, including vodka. The reason for this ban is due to the approaching World War 1. As soldiers need to stay sober and the government wants to reduce alcohol-related mental disorders, this was a smart move. Later, this ban would extend even after the war, the given reasoning was the ban reduces the amount of mental hospital patients, improve the overall wellbeing of citizens, and help with economic growth.

True to its promise, the initial statistics of positive effects gained from the ban was good. People reported less health problems, the villages had better spirits, and the amount of mental patients dropped down significantly. This ban wasn’t all roses and sunshine, however. The country loses over a third of its revenue. Even with the tsar saying “Revenue should be coming not from the sale of something that destroys the spiritual and economic power of the people.” The loss was still noticeable.

The happiness did not last long, as this ban made people turn to other means to entertain themselves. Gambling and watered down varnish were the more popular alternatives, and people make alternative drinks from sawdust, shavings, and fodder crops. The takedowns of wine distilleries have made nearly 300 thousand out of work, and people would raid wine storages in troops. Soldiers were sent to neutralize them in a bloody battle, and wines worth millions would be poured down the drain because the people would drunk themselves senseless if they manage to seize any. Consumptions of ‘replacement vodka’ made of the aforementioned ingredients rose to ridiculous levels, and some even turned to crime and drugs. As a result, the 11 years of ban was remembered as the time where blood were spilled over vodka, and not the happy sober society it meant to achieve. Eventually, the ban was lifted in 1925.

3. Russia at one point ran out of vodka.

May 7th, 1945, the day Nazi Germany surrendered, was celebrated as a victory in many parts of the world. The news reached Russian radio 2 days later at May 9th, and it was deemed a good reason to celebrate as the entire country was starved to death, beaten, ruled by a dictator, and suffered both mental and physical wounds in the hands of Nazi Germany. May 9th was a day of country wide party, and everyone bought their share of vodka, even in their pajamas.

About 22 hours into the day, a ‘grim’ news came from Joseph Stalin, informing the masses that the country ran out of the drink, all the liquor reserves completely depleted. This news, which came from a country that earns more than 1/4th of national revenue with vodka, produces vodka as first priority even during famine (using up 20% of grains and potatoes to make sure of this), and uses the sale of vodka to have an edge in the World War, has earned a few jokes about May 9th being the day Russians partied far too hard, drunk the country dry, and get mass hangovers. The next day, no one was able to buy vodka as it ran out the previous day.

4. Other usage of vodka in Russia

Aside from a drink to accompany a conversation or celebration, vodka is also known as a multipurpose liquid.

5. A museum dedicated to Russian vodka exists in Russia

In spite of the growing concern that vodka shortens the lives of Russian men, it is undeniable that vodka was an indispensable part of the Russian culture throughout time, and thus, a museum dedicated to vodka was opened in Admiralteyskaya. It costs 500 RUB for a tour and 30 minutes of tasting.