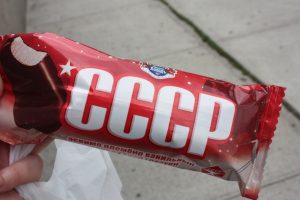 But there are also some unique things you should buy when visiting this beautiful country. These items are spread all over Russia, not only concentrated in the capital Moscow or St. Petersburg. For that, you need a good plan beforehand. Plan your budget before your trip to Russia and you have to pay attention timing too, read about the best time to visit Russia.

A favorite delicacy among Russians, Russian ice cream is more than just a delightful taste of frozen creamy dessert. Russian ice cream serves as some form of a nostalgia, both of the previous Soviet days, and also of sweet childhood days. Russians are known for their love for ice creams despite all occasions and weather. Queue in front of an ice cream shop is no less long in the winter that it is in the summer.

Visitors curious to try this frozen delicacy may head for Moscow’s GUM in order to grab a bite of a Russian ice cream. GUM department store, conveniently located just beside the Red Square, are packed with ice cream shops and stalls that are considered the best in Moscow. The queue here is long, especially around lunchtime. Not only tourists but locals also love to take a break from their work by enjoying a waffle cone of crème brûlée, chocolate or vanilla ice cream. Other big shopping malls in Russian big cities also offer Russian ice cream too, although GUM remains the best choice.

2. The village of Palekh – Palekh miniatures

located just outside of Moscow, the village of Palekh, and several of its neighbors (Kholuy, Matyora, and Fedoskino), are known since the 12th century for their wood painting art and craft. Although the artisans of Palekh today mostly produce wooden painted boxes, back in the day their work of arts used to ornate interiors of cathedrals and churches. This practice was prohibited during the Soviet era, hence artists were channeling their creativity over scenes from Russian folklore instead of religious icons. And their painting canvas is now mostly small boxes, cigarette boxes, and powder cases.

Based in St Petersburg, the White Nights Company offers high quality of Russian nesting dolls or Matryoshkas. The nesting dolls on sale here are not the typical matryoshka you can find at a random souvenir shop. They are carefully crafted, and meticulously painted by the artisans. Since every nesting dolls here is created handmade, buyers will obtain not only a good quality Matryoshka but also a unique one. Also, learn about matryoshka facts before you buy it.

You might wonder what unique item you can find at a railway station. In Moscow Russia, among the bustling commuters of Moscow’s railway station, lies a hidden treasure. Here in the station, tourists can find a vending machine selling one of the unique things you should buy in Russia – space food.

Russian take pride in their achievement in aeronautical engineering. And one its achievement, besides sending the first human into space, is inventing a nutritious but tasty food for astronauts. Everyone can have a taste for the said food now, thanks to the vending machine.

Space food is produced by Russian Space Food Laboratory, an actual institution. They come in a modern futuristic packaging. Space food is not only packed with healthy ingredients, but they are also delicious to eat. They are perfect for both to satisfy your hunger and also to bring home as a souvenir. Nothing is cooler than giving your friend a few packs of this food, they’ll be surprised and amazed by the product.

Pavlovsky Posad is a small town just outside Moscow with Textile industry as the town’s main business. This town is known for producing beautiful shawls called Pavloposadskie shawls. Many factories, established as old as in the 19th century, are still in operation up until today, producing scarves and kerchiefs for local demand and also for souvenirs.

The shawl is made from high-quality wool. Commonly decorated with the floral pattern, the shawl is a symbol of both elegance and tradition. Even though many considered this kind of headscarves as outdated, the headscarves are back in fashion recently. Russian women wear this shawl to protect them from harsh winter, and now it also to add up their unique fashion style.

If you want to taste the distinguished Kamchatka red king crab, you have to travel all the way to the easternmost of Russia. The crab is mostly harvested by fishermen in Kamtchaka, a small fishing town bordering Alaska by the Bering Sea. The crab is exported to all around the world and they are very expensive. If you’re in the big city, you can get the crab in a fine restaurant, but the price will increase to tenfold. The crab rarity makes it among unique things you should buy in Russia.

The crab itself is known for its delicious savory taste of its white flesh. Fishermen have to battle the freezing sea of Bering to catch these creatures. If you happen to be in Kamtcahkea, head to Komsomol Square fish and find some fresh king crab. Try to buy some and a much lower price than in Restaurant. Some seller also offers to cook the crab on site, perfect for anyone who loves to enjoy freshly cooked seafood.

In the Baltic coast, lies a large deposit of amber. It is the largest in the world, so Russian made a special factory out of in Kaliningrad. Since 1947, Russian ambers have been making their way as one of the significant icons of Russian. From its first five years of establishment alone, the factory was reported to produce 5 millions of amber jewelry.

The fossilized tree resins are made into various products, from furniture to jewelry. Female tourists will love amber accessories created into necklaces, earrings, and bracelets. They can be bought in many stores all over Russia. But if you want to be sure about the authenticity as well as quality, it is advisable for tourists to shop for Amber jewelry in Kaliningrad.

If you’re looking for unusual souvenirs, it would be a good idea to visit a Russian flea market. The items here not only unique but each bear a historical identity. Buy your friend at home some military items from the Soviet era. Soviet Army hats, pins, medals are being sold in abundance at Russian flea markets.

Several flea markets visitor can visit are Udelnaya Flea Market in St. Petersburg and Levsha Flea Market in Moscow. If you want to go hardcore, you can buy Lenin or Stalin paintings too. There’s also some Nazi memorabilia being sold at Russian flea market. You can go through many old items and if you’re lucky, you can have some interesting finds at the flea market.

Siberia not only popular for its harsh cold winter and polar bear. It is also popular for honey. Bortia honey is popular and in Japan, they are expensive and also a favorite. The honey is special, produced by a bee species inhabiting the Siberian Taiga. The honey is collected by the bee during the summer. By the end of the summer, locals harvest the honey. Being only able to be harvested once a year, that what makes Bortia honey rare and expensive, it is among Unique things you should buy in 10 places in Russia.