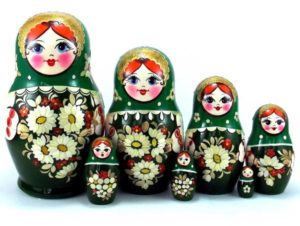 Do you know the set of wooden dolls that come in decreasing size, in which the smaller ones can be placed inside the bigger doll? Or perhaps you’re more familiar with the cartoon Higglytown Heroes? Yeah, those dolls… They are called the matryoshka dolls and have become a trademark Russian souvenir. This traditional handicraft is also commonly known as nesting doll or stacking dolls. But how much do you really know about these dolls, other than how cute they are? Do you want to know some interesting facts of Russian matryoshka dolls?

LIke the Bizarre Maslenitsa Traditions in Russia, the matryoshka dolls have also become an integral part of the Russian culture. These are 9 interesting facts of Russian matryoshka dolls:

1. The Namesake of “Matryoshka”

The matryoshka dolls first got its name from the derivation of two traditional Russian first names for females. They are “Matriosha” and “Matryona”, both of which are from the latin word “mater” that means “mother”. However, matryoshka itself also can form a Russian word, that when translated into English means “little matron”. Even in the modern days, many still see the nesting dolls as a symbol for motherhood as well as fertility.

You may know that Russian people have been crafting these nesting dolls for a long time. But do you exactly how long? Well, it turns out the first set of doll was created in 1890. That’s more than a century ago! The descriptions of the early matryoshka dolls aren’t clear, but many believed that they resembled a bald Buddhist monk.

3. The Men Who Innovated the Matryoshka Dolls

The idea of creating a set of nesting dolls belonged to Russian crafts painter Sergey Malyutin, who had lived in Abramtsevo, Northern Moscow. So the folk painter sketched his designs and recruited the help of Vasily Zvyozdochkin, who later carved and produced the first matryoshka dolls.

The most interesting aspects of the origins of the matryoshka dolls is how its inspiration came from a Japanese figurine. That Fukurama figurine was, in fact, the first known nesting doll. The model consisted of 7 dolls nested in one another and this inspired the Russian artist Malyutin. However, some people believe that these dolls didn’t really originate from Japan. They presumed that it had been brought to Honshu, the island where they made Fukurama, by an anonymous Russian monk.

5. Portrayal of a Peasant Family

Sources have claimed that Malyutin, the first designer of the Russian nesting dolls, intended to describe a peasant family. A mother who had 7 kids, to be exact. This is why there were 8 dolls in the first set ever made.

In the first few decades upon the crafting of matryoshkas, the outer layer would always be a woman. She is dressed in a traditional peasant dress and a scarf around her head. The other figures inside could be of both genders in alternating order, while the smallest doll is usually a baby. Today there are many more variations of these Russian nesting dolls. From cartoon characters to unique Russian figures, you can almost find them all. Sometimes, shops would even receive custom requests and make special dolls just for you.

It shouldn’t come down as surprising that many ambitious artists and carvers seek to break the world records surrounding matryoshka dolls. For example, the biggest set of nesting dolls were finished in 2003 by Russian artist Youlia Bereznitskaia. She had hand-painted all 51 pieces of the set, with the tallest standing at 54 cm and the smallest 0.31 cm. When placed side by side, the dolls cover 3.41 m in length. Amazing, right?

Long after the bread riots in Russia, in the Perestroika movement of late 1980s, freedom of speech and expression became known to Russian people. This had affected the types of nesting dolls being made in that period of time. Many made the Soviet Union leaders as the theme of the dolls. Mikhail Gorbachev, the current leader of that time, was the outermost and largest doll, while the inner dolls took form of the Soivet’s previous leaders. This included leaders from Leonid Brezhnev and Nikita Khrushchev, to Stalin, Lenin and even several famous Tsars. After the Soviet Union collapsed, new versions of the dolls would feature presidents like Yeltsin, Putin and Medvedev.

9. You Can Meet The Original Matryoshka Dolls

After learning all these interesting facts about Russian nesting dolls, do you feel like you want to see them? You can even look at the first set of matryoshka dolls that were designed by Sergey Malyutin. This set, as well as some olden sets, have been put on display in the Museum of Toys in Sergiev Posad, Russia.

Now that you know 9 interesting facts of Russian matryoshka dolls, you won’t wonder anymore about these unique figures when you see it. You might even be tempted to visit Russia just to witness the original dolls and the making of it! Well if it is indeed so, you must know the best time to visit Russia. Then, in order to make the most of your trips, try to visit other cities like these Russian Student-Friendly Cities. And while waiting for the start of your trip, check out all the Famous Movies that Take Place in Russia.