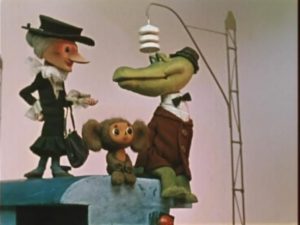 Have you ever seen a cartoon from Russia? If you’ve ever watched it, I can make sure if you’ve watched Masha and the Bear. Am I right?

Russian cartoons, Masha and the Bear, are already very popular throughout the world.  Then did you know that Russia also has a popular cartoon called Cheburashka? Maybe many of you don’t know about this cartoon yet. Therefore, let’s look at 4 characters of Cheburashka that you should know.

So that you all know more about the characters in the Cheburashka cartoon, in this article I will focus on discussing the 4 characters of Cheburashka that you should know.

Cheburashka is a cartoon character “of animals unknown to science.” He is known as such because he is an animal that resembles a small child but has large ears, has soft brown fur and has large, adorable eyes. He is also very energetic but very innocent. Cheburashka is the protagonist in the Cheburashka cartoon. Even though the character of Cheburashka is more than 50 years old, his character is still very well known among children. Even Cheburashka was used as the mascot of the Russian Olympic team in 2004. Cheburashka was also a popular souvenir from Russia.

When opening the orange chest, the grocery store manager was confused because he found a creature in the chest. He took the creature out of the chest and sat it on the table. The manager finally gave the creature the name “Cheburashka”.

Cheburashka was taken away by the manager of the grocery store who found it for the first time in a zoo. However, the zoo was refused Cheburashka. At the zoo, he met with Gena.

Gena is a crocodile that works in a zoo as … a crocodile. Well, he works as himself at the zoo to attract zoo visitors. Gena is a 50 year old crocodile. Which is still comparatively young age considering the crocodiles can live up to more than 100 years. Gena is known as a great characteristic of his clothes because he used suits, coats and hats.

In his free time, Gena enjoys singing and playing garmon, reading books and newspapers. Gena also likes smoking with pipe cigarettes. When he was birthday, Gena sang a song that became a special song in Russia. In the Cheburashka cartoon story, Gena is known as the best friend of Cheburashka. He often helped and accompanied Cheburashka.

Some say that the friendship between Gena and Cheburashka happened because of a “sign of looking for friends”. How can it be? Gena felt very lonely, make and put up a sign that he was looking for a friend. Cheburashka also answered the sign made by Gena. That is where their friendship began.

In a story, if there is a good character (protagonist) of course there is also an evil character (antagonist). Likewise, in the Cheburashka cartoon. When Cheburashka and Gena do their adventures, there are things that make it difficult for them. This troublesome figure named Old Lady Shapoklyak.

Besides Gena, in the cartoon Cheburashka also has another best friend, Galya. Galya is a school student. Galya is a good girl. Galya is also a promising child actress at a local theater. Cheburashka met with Galya when they see a sign (advertising) made by Gena when the crocodile was looking for a friend. The two of them came to Gena’s apartment.

I hope this article can really help you to find out the 4 characters of Cheburashka that you should know. Have you been interested in watching the Cheburashka cartoon?  Which one is your favorite character?