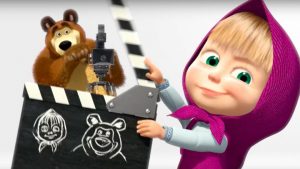 Do you like watching cartoons? What kind of cartoons do you watch often?

There are many types of cartoons that exist in each country. There are even many cartoons from a country that is very well known to the whole world. Maybe if I mention the title of this cartoon, you can instantly recognize the characters.

Do you know the cartoon “Masha and the Bear”? Yes, you are right. The cartoon whose character is a little girl and bear. This cartoon is from Russia. But do you know if there are hidden stories behind the famous cartoon Masha and the bear?

Cartoon shows are not only liked by children but also adults. Watching cartoons can be entertainment and also a learning tool. There are lots of famous cartoons throughout the world. One of the famous cartoons is a cartoon from Russia called Masha and the Bear.

Masha and the Bear is a cartoon that tells about friendship between a little girl and a bear. In the Masha and the Bear cartoon, the audience will also see many other animals interacting with Masha or the Bear. As already known, Masha is a very active little girl. For some people, Masha’s character is more likely to be a naughty child. She often makes trouble at the Bear’s house and the Bear will take care of the mess that Masha made.

But, behind Masha’s funny behavior in cartoons, there are hidden stories. In this article, I will discuss the hidden story behind the famous cartoon Masha and the Bear.

According to the project director of the animated cartoon series Masha and the Bear, Masha’s character is based on a real person seen by the project’s artistic director. The director saw a little girl on a beach in the 1990s.

The little girl was very open with strangers and also very clever. She did not hesitate to approach the stranger she saw then invited the stranger to play chess or do something else with her. However, a few days later, foreign tourists began to hide and avoid the little girl. According to them, the little girl was too active and more likely to be annoying. From that story Masha’s character in the animated cartoon series Masha and the Bear was created.

Once upon a time, there lived an old couple with their granddaughter named Masha. One day, there were some friends of Masha who came to Masha’s house to invite her to collect mushrooms and berries. They visit Masha’s house to take her away with them. Seeing her friends coming, Masha asked permission from her grandparents to let her go to the forest with her friends. Her grandfather and grandmother gave her permission and advised if she should always be close to her other friends or she could be lost.

After arriving in the forest, Masha and her friends start looking for mushrooms and berries. Too busy collecting mushrooms and berries, Masha did not realize that she had been separated from her friends. When she realized that she was alone, Masha started calling on her friends but there was no answer. Masha began walking along the forest until finally found a small hut. She knocked on the door but there was no answer. Masha pushed the door and went inside, she sat on a bench near the window. Masha thinks who lives in the hut. She didn’t know if a Bear lived there.

When the night came, Bear came home and when he saw Masha in his house, he was happy and said, “Now I won’t let you leave here! You will stay here and become my servant.” Hearing that, Masha became sad. From that moment Masha began to become a bear servant. Bears go to the forest every day and come back at night.

During her stay in Bear’s house, Masha was not allowed to go out without him. Bears threaten to arrest and eat Masha if she doesn’t obey. So, Masha just sat down and thought about how to get away from the Bear house. Masha thought long enough and she found a way out.

That day, when Bear returned from the forest, Masha asked his permission to go to Masha’s village. Masha wants to give good food to her grandparents. Sure, Bear doesn’t give his permission and offers if he will replace Masha to her village. Masha agreed and began to make some pies and then put it in a large basket.

Before leaving, Masha advised him not to open the basket while on the road and not to eat the pie. Masha says if she will keep watching the Bear from the pine tree. Bears go to the terrace to make sure if the day isn’t raining. Just then, Masha entered in a basket and covered herself with the pie.

The bear continued to walk until it was exhausted. Every bear wants to rest and eat the pie he brought, Masha talks to the Bear from the basket, “I see you. Don’t sit and don’t eat my pie. Bring my pie to my grandparents.” Bears think if Masha has sharp eyes because she can still see what she is doing. And it kept repeating until Bear arrived at the house of Masha’s grandparents.

The bear shouted to open the gate because he was carrying something from Masha. Bear crying from exhaustion. But the dogs in the village smell the bear and ran after him. The frightened bear left the basket near the gate of the house. Masha’s grandparents came to open the gate and looked at the basket. Masha’s grandpa opened the basket and saw Masha sitting there alive and well. They were very happy because finally Masha returned home.

Some say that the character Masha was made to commemorate a little girl who was killed by a bear. She died when visiting a circus with her parents.

I hope this article can give you some information about hidden story behind the famous cartoon Masha and the Bear.