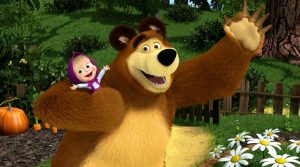 Story ideas from the Masha and the Bear cartoon series are unique ideas. In this cartoon, it is told about a friendly relationship between a child (Masha) and an adult (the Bear). This relationship does exist in everyday life, but is very rarely used as the theme of a show for children’s cartoon shows. There are also several episodes that feature a lot of music and songs. This certainly can attract the interest of viewers, both children and adults. The author of the cartoon series Masha and the Bear has a long-term vision so that the storyline of this cartoon series can be easier to develop.

When children watch cartoons, of course they need to get guidance from their parents. With their parents, children can receive an explanation of something they are watching. In addition to being entertainment, cartoons can also be used as learning media for children to get to know something. Masha and the Bear is one cartoon that can be used for learning media.

Learning that can be obtained from the Masha and the Bear cartoon is about the introduction of animals to children. In the Masha and the Bear cartoon series, besides the little girl Masha and the Bear, there are also other animal characters. For example, pets in front of Masha’s house, pigs, goats, dogs and chickens (in the first episode). There are also wild animals that often roam like rabbits, squirrels, wolves and porcupines. In some episodes it also shows female bears. Children will find it easy to understand the name of the animal when they see the animal.

Cartoon not only be enjoyed and loved by children, but also adults. Many adults who still love and enjoy the show cartoons in their free time. One of the favorite cartoon series of children and adults is the cartoon series Masha and the Bear.

In the Masha and the Bear cartoon series, adults and children can enjoy entertainment from the funny behavior of Masha and other characters. According to the audience of Masha and the Bear, this cartoon series is so popular because of its good animation, fun and light storyline, and also the behavior of each character. Masha’s character really shows the behavior of children who are innocent, active and sometimes naughty. While the character of the Bear, he is like an old man who is tired and frustrated facing Masha’s behavior but also very fond of Masha.

But behind all that, there is still Masha’s good behavior that children can emulate outside of her bad behavior. In some episodes it can be seen if Masha is also a brave child, being herself, and loving. For this reason, there needs to be assistance and direction from parents of the character behavior that is watched by their children. So slowly children will be able to distinguish between good and bad.