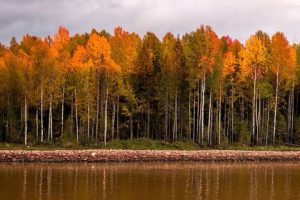 For the rest of the world, birch trees may not have any significant meaning. The majority of us see them only as another type of trees. However, this isn’t the case for Russians. Birch trees are an integral part of their culture, because the meaning of birch tree for Russian people is rather special.

Just like how the Russians use Bread as Symbols of Every Aspect in Russian’s life. And also the important meaning of Bread and Salt in Russian Wedding Tradition, the meaning of birch tree for Russian people is extremely significant for them.

A Gift From God

In Russian language, birch tree is called “bereza” and this ancient word is closely related to the verb “berech”. It means “to keep” or “to take care of”. Partly, this was influenced by how the Slavs of old days regarded the birch. They believed the birch trees had been presented to the people by God as a form of protection. Then, they marked the beginning of the year with the commencement of spring and celebrated it with the birch.

Moreover, many people back then also believed how the “birch spirit” could guard them against bad things and diseases. They would plant the birch near their houses and all around the village to form a sort of protective wall. Sometimes, people would even speak with the tree in order to ask for strength and courage. Things made from the birch were also seen as talismans that could defeat evil forces. Meanwhile, there were plenty of bright and clean birch forests filled with birds, fresh mushrooms and berries.

In ancient days, the birch was not only a symbol of strength and holy protection. They were also used for practical matters. For example, the Slavs used birch bark to make footwear known as lapti and various handcrafts that later became Russia’s major tradition. Back before paper was even invented, the Slavs were already able to make written records. This is because they used birch bark to write on and to document information.

The Birch For Medicine and Healing

For many centuries, the birch has been appraised for its healing properties. Even today, some people go walking in a birch grove to help them stay happy as well as healthy. It’s also believed that when you touch a birch tree, you will experience an emotional balance and decreased levels of stress. A man in a birch forest will feel healthy, calm and full of vigour. This is possible because the birch is believed to have bioenergetic therapeutic effects for people.

Russian people have been using various parts of the birch tree for health purposes. This include its leaves, bark, branches, tender roots, juice, sap and coals.

Since the beginning, the birch bark was already considered as an essential medicine. It could be used to treat the joints, urinary as well as nervous systems against many diseases. The Slavs are known to grind birch bark and apply them on the wounds for faster healing.

Meanwhile, the birch sap is also used for medicine. In Russia, concentrated birch sap can be processed to make birch syrup. This traditional tonic is then used as a type of herbal medicine. It has the same properties as modern antiseptic, anti-inflammatory, anti-parasitic as well as to treat itching skin.

Modern historians have found records from the 16th and 17th century that gave advice for treating illness using birch-based medicine. This is all the more evidence that Russians have been using and making use of the birch as medicine for a long time.

For those of you who are not familiar with the birch broom, it is an essential part of every Russian sauna. It really is difficult to imagine the steaming hot saunas without birch brooms. Their leaves and buds emanate phytoncides that are useful for sterilizing the air. It’s now one of the trademarks of Russian sauna baths.

To sum things up, the birch tree is more than just a common species of trees for the Russians. Not only are they a symbol of light and protection, they are also used in the health industry as herbal tonics and medicine. Now, you know the meaning of birch tree for Russian people. Therefore you are able to understand their culture and tradition from a whole new perspective. The next time you visit Russia and see a birch tree or references to the birch, remember its meaning and long history! This will certainly make your trip more interesting.

Of course you will also need to be prepared and research about the Best Time to Visit Russia. To make the trip even better, why not watch some Famous Movies that Take Place in Russia and learn the Easy Ways to Learn Russian Language in A Day? In this way, you can be more immersed with the Russian traditions and culture, making your trip a once-in-a-lifetime experience you’ll never forget!