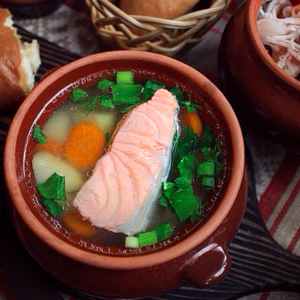 Most favorite food in Russia during the season. Russia has four seasons; winter, spring, summer and autumn. The winter months are December, January, and February. The weathers in winter are cold, snows, and the days are short and the nights are long. We may see the frozen lakes and rivers. As in snow condition in other countries, we may go for skating and skiing. But, the most favorite besides playing in snow is the food and drink. In this chapter, we will explore on most favorite food in Russia during the winter season.

Talking about food and drink in cold weather, we suppose refer the food to something that hot and warm. In Indonesia, we may mentions some drinks, such as hot tea, “wedang ronde, stmj, and a lot of other”. Now, how about the Russia? What is the most favorite food in Russia during the winter season? Christmas celebration and New Year Celebration also draw the Russian favorite food.

Talking about food, we may probably mention a soup. In fact, practically, the food serving in the warm and cold weather has purpose to keep the body warm. And, what is inside the Russian food at winter season? Russian food is full of warm soups and healthy meals. Those foods not only keep your body warm, but also quickly fill up your stomach. Here, are some most favorite foods in Russia in winter season;

Previously, we have mentioned about soup. There are some kinds of soups of favorite for Russian people in winter season.  First, Rassolnik is an old traditional Russian soup. As the history dates of the soup, have been made since the 15th century. The soup is made of cucumber and barley. Russian people often added with pieces of meat and potatoes, and sometimes they like to add the fish and vegetarian. The taste of the soup is sour-salty. Please eat one portion of the soup, it will make instantly warm up your body in winter season.

Second, Borscht is actually origin of Ukarinian but the food is also popular among Russian people. The soup is made of beetroot, cabbage, potatoes and meat (vegetarian is possible). In fact, borscht can be eaten either hot or cold, which makes it a soup for both cold Russian winters and hot summers.

Third, Solyanka has salty taste. It becomes another soup on the list. The soup is made of cucumber and brine as the basis, but the ingredients are meat, fish or mushrooms (vegetarian is possible). The soup is perfect choice for winter evenings and hangover cure. In other version of cooking Solyanka soup, they made with a mix of fresh and cured beef, pork and sometimes chicken. They called the soup as having the peculiar taste.

The next favorite Russian food in winter is salad. Let’s start with Salad Olivier. Salad Olivier is one of the most popular foods in winter. The west called it as Russian salad. Salad Olivier is made of boiled potato, pees, meat, pickled cucumbers, onions, eggs and carrots. People also prefer to make variation of this food, and they called as Stolichny salad. We may find the food in New Year celebration and holidays like New Year’s Eve.

Second, Vinegrette is a traditional Russian salad. The Vinegrette is made of boiled beets, potatoes, carrots, pickles, onions and sauerkraut. As in history, the salad was first made in the 19th century.

Pelmeni might the first mention as the popular dishes. It made of meat, fish or mushrooms. They might served in boiled, fried or in a soup.

The second is Beef Stroganoff. It made of sliced of beef, onions and mushroom. They usually served the soup with rice or pasta and sour cream. But, unfortunately, the food is not recommended for tiny and sensitive stomachs.

The last dishes we discuss in the particular article is Golubtsy, literally it means pigeon. It made of cabbage rolls – cabbage leaves stuffed with meat and rice, often accompanied with a sauce

Russian people also serve porridge at their table. Not only at winter, but also at any season of the year, the Russian people made the porridge. They made of cereals and flour. Cabbage soup also serves as well.

The last thing is talking about drink. We may probably mention Sbiten as the first. Sbiten is a traditional Russian hot beverage. Russian people loved this kind of drink in winter season. The sbiten is made of honey mixed with water, spices and jam. As in history, Sbiten was first mentioned in the 12 century and became popular till 19th century when was substituted with tea and coffee.

Second, Tea is a kind of drink which is very popular among the world. Also in Russia, both black and green teas are popular drink. They consume it on daily. They often serve tea with small sweets, honey or varenye (home-made jam).

The next two last of drink contain alcoholic. First, Medovukha is a honey-based alcoholic beverage. But the Medovukha usually doesn’t contain more than 16% of alcohol. Russian people made it at home. Second, Vodka, they refer to add spices such as honey and red pepper. Read more about interesting facts about Russian’s love for vodka

In sum, the most favorite foods in Russia during winter Season are soup, dishes, salad, porridge and some kind of beverages to warm the body. They may cook by their own at home or buy at restaurant. We may taste the soup of Rassolnik, Borscht, and Solyanka. The two tops favorite salads are Salad Olivier and Vinegrette. The ingredient is a heritage and since the old time.

In the dishes, Pelmeni, Beef Stroganoff, and Golubtsy may be accompanied you in your meal. Don’t forget to taste the porridge. And, please chose one of the drinks – alcoholic or non-alcoholic. In this case, you may choose your favorite food. Read also about Bread Riots in Russia and Easter Egg in Russia.