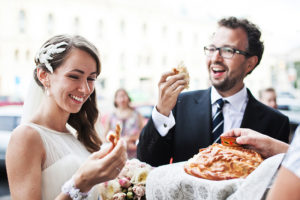 Marriage is a sacred event when man and husband are bound in a holy agreement. The bride and groom are stated their promise to love and keep each other till the end of life. Every country has own wedding tradition, such as bread and salt in Russian wedding tradition.

Bread and salt also become symbol at wedding tradition. It likes wedding tradition in Indonesia, a country which has many of wedding traditions, such as Javanese tradition, Batak, Kalimantan, and a lot of others. In East Kalimantan and South Sulawesi, they have Jujuran and Panai, it means, the groom must present amount of money. The money is presented in order to be used in wedding party or after the wedding day. Other traditions, in Jakarta for example, the capital of Indonesia, they present Roti Buaya (a bread with crocodile shape), symbolism of loyal and they hope they bride and groom will live happy ever after.

The bread is also important at wedding for Russian people. Why? They serve bread and salt at wedding. It symbolizes or sign that the bride and groom are ready to move in to live or move into a new home. The ritual of tradition, time to time, generation to generation, they keep and still practice it in every day live. So, here are some facts about bread and salt in wedding tradition;

Present The Bread and Salt at Wedding

As stated in the article titled bread in Russian, the people of Russian may not probably life without bread. They always present bread in their table. Bread has sacred meaning and put in their heart. They stated, we are not live by bread alone, but we cannot survive without salt. So, they present also the bread and salt in wedding tradition.

What Does the Bread and Salt Means at Wedding Tradition?

There are a lot of saying about bread and salt in Russian. But I would like to quote one of the appropriateness toward the wedding tradition. The saying “Bread is the head of everything”, what does it means? This Russian saying explains the importance of bread in Russia for many centuries (here, you must read stories why bread is so important in the bread in Russian and symbolism of Bread). By the saying and definitions, Bread is defined as life and bread is hospitality, meanwhile the Salt is a symbol of wealth and prosperity.

Bread in Russia is also a symbol of fertility and prosperity. Moreover the bread and salt also sign that the bride and groom are ready to move in to live or move into a new home. So, present the bread and salt in the wedding, means also protecting and respective to the heritage.

The Ritual of Bread and Salt at Wedding

What does the bread and salt ritual means at wedding? It symbolizes as they will take care of each other ever after. While they were eating the bread, the groom’s mother spoke in Russian to the bride – it officially welcomes the bride into the family.

How are about the guests at wedding? The guests are invited to share the remainder bread and salt. What are they saying while eating the bread? They shout and asking “just one more piece!” It reflects how delicious the bread and salt are.

There is a humorous token of wedding at present time. When the new wed husband and wife enter the house where parents wait with bread and salt, just like after the completion of wedding party, they are invited to break off the bread. After that, put it into the salt and eat. The humorous token is, who could break off the biggest/largest piece or bite the biggest/largest piece, then wife or husband will be ‘boss’ or ‘head’ in the new family. It’s a very interesting ritual.

The Dinner at Wedding

Karavay is round bread decorated with dough figurines. The bread actually made for weddings, but they also serve for funerals. The Russian people usually serve and bake the karavay bread at wedding. It symbolizes prosperity and a symbol of spousal faithfulness. The Russian people believe, the bigger the wedding karavai bread, the happier the young family would be. In sum, the Karavay at wedding is symbol of happiness and affluence.

Bread and salt at wedding party has special place and a must due to its function and sacred of ritual. Just like Easter egg, the bread and salt symbolized the bride and groom is ready to move in to life and hospitality, wealth and prosperity. In the ritual, the groom’s mother bakes the bread and presented at the wedding, and also use as gift to welcome the groom and family. One of the types of the bread at wedding ceremony is Karavay Bread. Read also about brad riots in Russia.