Russian shawl is one of a kind souvenir that tourists won’t miss when they come to Russia. But Russian shawls are more than mere souvenir. The use of shawl is deeply entrenched within Russian tradition. Many women in Russia choose shawl as their most favorite accessory, for the simple reason that it offers both comfort and warmth without sacrificing aesthetics.

Traditionally, women use Russian shawls as headscarves, tying them around the waist, or throw them over their shoulders. Any way you wear it, it would still create warm and beautiful look in winter. 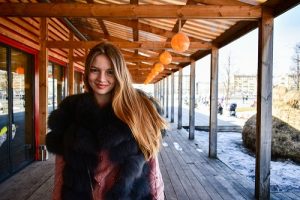 Don’t think of Russian shawls as accessories for mothers and grandmothers only, because they are suitable for everyone, both old and young. The patterns and designs are so gorgeous, elegant, and delicate. Even the hugely popular Kate Middleton is known for wearing it on several occasions.

Do you want to try it too? First and foremost, you need to know that there are at least four kinds of Russian shawls you could choose. They are the classic Pavlovo Posad shawls, the majestic Orenburg shawls, the chic fluffy fur shawls, and the cozy fur-trimmed shawls.

The factory has adapted well thanks to a variety of reasons. They have maintained such a high quality that cannot be exceeded by any other shawl producers, both in fabric and designs. As time changes, they also gain support from the Russian government and develop more innovative sales channel.

Currently, you can buy Pavlovo Posad shawls through online channels from the original factory’s website and re-sellers. They are available in its original wool and other types of fabric, including silk and cotton. Be it wool shawls, silk scarves, or cotton ones, all of them are decorated with Pavlovo Posad’s proprietary patterns.

You can wear Pavlovo Posad shawls for formal and informal occassions, whenever you feel like it. In fact, UK Prime Minister, Theresa May, has been repeatedly caught wearing them on camera when she come and goes from official meetings. There are also many ways to wear them; drape them across one shoulder, tying them on your waist, wrap them tightly tube-like on your neck, throw them over as headscarf, or tie them bandana-like on your head. There are so many “how to wear Russian shawl” tutorial that you could emulate.

Nowadays, celebrities such as Madonna and Fergie favor Orenburg shawls for formal and informal events. So do Catherine, the Duchess of Cambridge, who use it to wrap her baby on their first photo op. You can replicate them easily as the Orenburg shawls can be bought online through Etsy, directly from local handcrafter, or second hand from cheap clothes store in Russia. It is also splendid gift from Russia for every mother. With proper care, the Russian shawls can last for a long time.

Fluffy fur shawls, or also known as fluffy fur collar scarf, is one of the top five stylish Russian accessories for women. Many other cultures in Europe have their own brand of fluffy fur shawls. However, Russian shawls are arguably made from the best and warmest fur such as mink and sable. Of course, as the anti animal fur movements grow, most fluffy fur shawls no longer uses authentic furs, but instead faux fur.

Russians are fashion-conscious crowd, and Russian designers have to keep up with the demand. Therefore, Russian fluffy fur shawls are chic and edgy, suitable for mix and match with a variety of styles. You can see Russian fluffy fur shawls on so many occasions, worn by singers, models, politicians, and sportsmen. It can be worn over coats when you walk around during winter, over ball gown in gala dinner, and many other purposes.

In November 2014, President Vladimir Putin’s gallantry receives international attention. During a fireworks display at National Aquatics Center, Beijing, he drapes a shawl around the shoulders of China’s First Lady, Peng Liyuan. Meanwhile, Peng’s husband, the Chinese President Xi Jinping is talking with another world leader nearby.

The incident becomes an international sensation for some time because as soon as the videos come to Chinese televisions, they are hit by censors. Giving warm shawl for a lady is a gentleman behavior in Russia, but less praiseworthy in China where people are supposed to act more restrained. However, it is actually a common gesture from the figure known as the most influential person in Russia. A year earlier, Putin drapes similar shawl on the shoulders of German Chancellor Angela Merkel.

On both incidents, the same kind of shawl is shown, that is the fur-trimmed shawl. This type of shawl is less popular among Russian women due to its blanket-like appearance. Putin even got the nickname of “blanket guy” from several newsrooms because of this reason. But actually, fur-trimmed shawls offer more daring and valiant image compared to the other types of Russian shawl for warm and beautiful look in winter.

Fur-trimmed shawls can also be used in various circumstances, but more particularly when you are going for an outdoor excursion. Tomboyish girls will love it. Just throw it over your shoulders, and you are good to go.