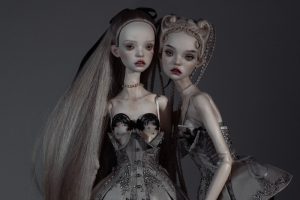 Russia is no short of talented artists. Usually known for its ballet, there’s another form of art Russian artists secretly excel in: making and sculpting dolls. It’s not surprising though, as a country known for its Matryoshka, dolls art is no stranger for some Russian (such as Nevalyashka). Meet Popovy sisters. Known for their art dolls, their creations are not only a legendary toy from Russia, it’s high fashion.

Here are some things you must know about them.

Like its name, Popovy sisters are comprised of two sisters Ekaterina and Elena Popovy from Saint Petersburg, Russia. They are identical twins. They’ve been a fashion enthusiast ever since they were teenagers. The two has been experimenting with their creativity ever since they were young. They liked to draw and make the barbie’s doll and style Barbie’s hair.

Graduating high school, the sisters studied fashion design in college. In the second year of college, they went to a doll exhibition for an assignment. That’s where they were inspired by the art of doll-making. Soon after the exhibition, Ekaterina and Elena found themselves a tutor who then helped them shaped who they are today. They also took several classes in doll sculpting and making.

Before long they started to make their own doll. In the early days, the sisters use famous people as the inspiration for their doll. Among their inspiration were Madonna, Johnny Depp, and Marylin Manson. They prefer to find someone with unique features. Their first creation was called Portrait dolls. But it was not until their second creation, Fashion Moon, they became known even outside Russia. Fashion Moon also when they found their signature style. It’s also when they started to roll out their collection in a thematic series.

Popovy sisters dolls are known for its ethereal designs. They look like coming straight from the fantasy world. If the haunting expression on the doll’s face isn’t enough, so are the costume the dolls wear. They are artistically surreal, combining fantasy and fashion. Popovy sisters dolls look more like fairies than human. Read also other eerie toys from Russia.

3. The dolls are categorized in various theme

The Royal series is a collection of dolls with, well, royal theme. But of course, Popovy sisters’ definition of “royal” isn’t what most people have in mind. The dolls still do have crowns and wear gowns. But there’s something about them that makes them look like they’re coming from a certain goth kingdom.

Nature is also an inspiration for Popovy sisters. As shown in their line “Pupa” and “Bird”, the collection takes elements from both animals for the design of the dolls clothing and accessories. As a result, meet a doll looking like a hybrid of human and a bee, or a human and a moth. Popovy sisters have a fondness for insects. Their logo itself is a teenage girl and moths. The sisters call them “the moth girl”.

Their other collections include “Swan Lake”, inspired from the popular ballet with the same title, “Pearl Grey”, “Genesis”. They also make a series of dolls by order, usually for famous people.

4. Popovy dolls are model-like for a reason

If you browse through their collection, you’ll notice that the body of these dolls is like those of models. They intended to lengthen the proportion of the dolls for aesthetic purpose. Rather than thin, the sisters would call their dolls “narrow”. The body type is chosen so when the dolls where an elaborate outfit, it doesn’t look bulging. They also lengthen the neck height, so in several costumes with collars, the neck won’t disappear and the dolls look like it’s drowning in costumes.

Popovy sisters Emphasize the individuality of every doll they make. For them, individuality is the primary definition of beauty. They purposely gave imperfections such as gap teeth in order to make their dolls unique from one another. They are also given solemn and thoughtful looks, instead of sweet faces. It makes them looks real and complicated.

6. The dolls are posable

One of the things that make Popovy sisters art dolls so artsy is their ability to pose. Posing can exude more expression and meaning than when the dolls are simply standing. The sisters equip each one of their dolls with ball joints. According to them, posing gave another dimension of their art and strengthen the image they want to create.

One of the fans of their art is Jean Paul Gaultier, the famous French fashion designer, and couturier who design for Hermes. Popovy sisters also make a line of dolls for Die Antwoord, a hip hop group from South Africa.

Popovy art dolls are made from mixed material. Self-hardening plastics, hot and cold porcelain. The sisters import their material from Italy, France, and Japan for the best quality possible. They use natural silk from Japan for the dolls’ hair, as well as wool. Accessories are made from brass and Swarovski crystals. Clothes are made from delicate and antique fabrics.

9. Popovy sisters have some great plans for the future

In the future, Popovy sisters wish to work with designers to create a fashion line. They want the outfit for their dolls are able to be worn by a real human. They also wish the same thing for shoes and accessories. The wish for collaborations and maximizing their potential.

Another thing, they want their dolls to be real models featured in magazines and advertising real clothes and accessories.