According to a report published by leading economic media Bloomberg in October 2018, Russia is the second biggest chocolate confectionery market by volume worldwide. It is just one place below the USA. Even further, the country’s appetite for chocolate is rising four times faster than average global demand. Increasing interest in healthier treats also fail to decrease Russian demand for chocolate, although some other countries has seen significant decline because of this reason.

There are numerous reasons that may explain why Russian appetite for chocolate increases by leaps and bounds. Culturally, chocolate is one of few items that are free of Russian superstitions and will be happily received by people of any ages from young kid to babushkas. There are also no overtly tricky chocolate gifting etiquette, making it a suitable gift for many festive occasions and delicious treat for everyone . Moreover, there are so many kinds of chocolate that you can choose to satisfy your sweet tooth. 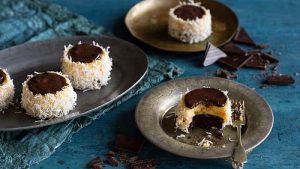 Aside of the legendary Alenka bars and other famous chocolate confectionery in Russia, there are scores of chocolate cakes and chocolate-based dessert recipes that can be made personally in household’s kitchen. Here’s the full chocolate coverage, these Russian chocolate cakes will make you melt in no time at all.

Unlike its name, the Prague Cake has no relation at all with the capital of the Czech Republic. It is a fabulous gastronomic innovation created in 1970s by a pastry chef from Prague restaurant in Moscow. A moist and light layered cake that can be made using local Russian ingredients such as condensed milk, buttercream, nuts, and chocolate cream.

Russian Charlotte Cake is created by French chef Marie-Antoine Carême in honor of his former and later employer, Princess Charlotte Augusta of Wales and Czar Alexander I. The dessert consists of linings from stale bread, sponge cake, or ladyfingers, with fillings from chocolate mousse, fruit puree, citrus curd, or creamy custard. It can be presented hot and cold, quite similar to the more well-known Tiramisu Cake with the exception of fruit inclusion.

Spartak Cake is a rich and creamy layered pastry filled with custard, which may be cooked sweet or savory, with or without the addition of chocolate cream. It is also called as Napoleon Cake, because the origin come from a Napoleon-hat-shaped cake made in 1912 as part of celebrations of Russia’s success in defeating Napoleon’s army ten years prior. To make Chocolate Spartak Cake, prepare two parts of ingredients for the cake and cream separately, then layer them one by one patiently. You can make as many layers as you want, or usually up to 16 layers.

Ptichye Moloko is a famous soft meringue or milk soufflé confectionery covered with chocolate mousse. The origin of the name come from Ancient Greece’s words which means “an unobtainable delicacy”, due to the difficulty in composing the correct consistency for the decadent candy. However, it is not so unobtainable today because it can be found in grocery stores across Eastern European countries and also be made in our own kitchen as long as we have a ready-made recipe.

As the name suggests, it looks like mini Russian hats with a round of chocolate and custard cream-layered sponge cake rounded in shredded coconut. With soft sponge at its core, this one may suit the notebook definition of cupcakes. However, the Russian Hat Cake will be easily melt in high temperatures, so you should serve them chilled.

Muraveynik Cake is infamously known as “Anthill Cake” because of its appearance that looks like a mound of extra soil thrown by ants when they make their nests. It is created during food crisis in the Soviet era by housewives who need quick desserts from inexpensive ingredients, but becomes favorite dessert throughout the years. The dough can be made simply by mixing sugar, milk, baking soda, salt, and flour; while the cream is mixed from condensed milk and butter. It is not as tricky to make as Prague Cake or Charlotte Cake, but may be more popular among children.

Pancho Cake is the younger generation of Muraveynik Cake which still appear like a whole lot of mess on a plate, but with richer ingredients. Chocolate and vanilla layers of sponge cake filled with walnuts and cherries are covered with chocolate glaze. Sometimes, the sponge cake layers are also dipped in sour cream to make it even richer.

Korolevskiy Cake, also called Royal Cake or King’s Cake, is a favorite among many Russian families and typically cooked for Christmas. The Russian chocolate cake is made using a lot of sour cream for filling and chocolate for glazing, with plenty of walnut, poppy seed, and cherry among its layers.

Kiev Cake is indeed originated from Kiev, the capital of Ukraine, by the Karl Marx Confectionery Factory in 1956. However, it has spread all across ex-Soviet Union countries, including Russia. It only consists of two layers of meringue with fillings from cashew, chocolate, and buttercream. If cashews is considered as expensive, it may also be exchanged with peanuts or hazelnut.

Kartoshka Balls are mini truffle-like confectionery cakes beloved by children and housewives all over Russia. It is the oldest cake and the most simple to make among all chocolate delicacies in this list, which makes it very popular during times of food deficit in Russian history.

To make Kartoshka Rum Balls, simply crumble biscuits in a blender and mix it with cocoa powder, then add melted butter and condensed milk into the mix. Take a pinch of the dough and roll it into a ball, then dip it in cocoa powder. Store it in the refrigerator, then serve it cold. Very easy, don’t you think? To vary its flavor, you can add chopped nuts or liquor into the dough.