Have you ever heard of Birch Tree Juice? Chances are, you haven’t heard about it if you have never visited Russia. Birch Tree Juice is a well-known traditional beverage only in Russia and its neighboring Baltic countries, although bottled version of Birch Tree Juice (also called Birch Water) have started to gain attention among worldwide health enthusiast since a few years ago. In the region, people usually prefer to consume the freshly sapped juice of birch tree or a fermented one, and rarely from pasteurized packages sold in supermarkets.

Birch Tree Juice first rose to prominence during post-Soviet era, because nutritious foods were rare and there were a shortage of lemonade for children. Russian government at the time allowed people to and gather resources in the forests to prevent famine. Birch Tree Juice was one of the finest findings along with mushrooms, berries, and nuts. Since then, extracting the sap of birch tree became an exciting activity since the first day of spring in Russia. 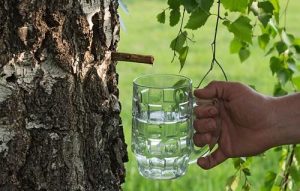 Aside of its refreshing qualities, the Juice contains numerous nutritional and medicinal advantages that has been proven scientifically. Birch Tree Juice may be less popular compared to other natural super drinks such as coconut water and kombucha. However, it may have more health benefits. What are they? Here is some benefit of drinking Birch Tree Juice that you should know.

One other study by the Polish Botanical Society also notes that Birch Tree Juice can be considered as supplementary nutrition, with its sugars, minerals, and vitamins supporting the liver. Traditionally, it functions as an alternative first nourishment for newborn. It is also known as one of the popular and tasty Russian beverages for children.

Birch Tree Juice may assists you in weight loss program by eliminating toxins without draining your energy. Nathalie Chantal de Ahna, a certified nutritionist, have chronicled a “birch sap detox” trial by drinking 3/4 cups on empty stomach every day for four weeks. The result: she loses weight as intended, and gains clearer skin as an extra advantage.

Other, less credible resources mentions that benefit of drinking Birch Tree Juice may extend to skin and hair. It is said to support cellulite reduction and help you gain shinier hair. True or not? An objective opinion on the matter claims that Birch Tree Juice may detoxify, but further result should not be as fantastic as smoothing your decades-old cellulite.

Also, not all Juices are as beneficial. Packaged Birch Tree Juice that has been exported out of Russia and being sold in grocery stores may maintain its rich nutrients, but it has been pasteurized and comes with additives. There may also be processed sugar that poses significant risk for your health. It is better if you consume fresh or homemade Birch Tree Juice which carries no unhealthy sweeteners and other potentially harmful additives.

Do you feel pain and stiffness in your joints? Every now and then, you feel numb and unpleasant tingling feeling, or even suffer some swelling. These are symptoms of arthritis, a common disease that affect around 5% of people and more prevalent among older population due to daily wear and tear. Try drinking Birch Tree Juice to relieve your pains.

Birch Tree Juice has long been established as tonic to treat various kinds of arthritis, including rheumatoid arthritis, osteoarthritis, and gout. Notes by Baron Pierre-Francois Percy, an army surgeon and inspector general to Napoleon from the 1800s, mentions that “Birch sap is an invaluable remedy for rheumatic diseases, the after-effects of gout, bladder obstructions, and countless chronic ills”.

According to modern-day nutritionists, it is due to anti-inflammatory properties that can prevent buildup of uric acid and help reduce swelling. To boost its effectiveness, someone may drink Birch Tree Juice for health boosters internally and apply a compress from mashed birch leaves externally. The formula may be a better option in exchange of chemical medicines; though you should not hesitate to consult a doctor if the symtoms worsen.

As mentioned earlier, the popular traditional Russian drink has anti-inflammatory properties that reduces pain and swelling. It is not only useful for joint pain, but also toothache. Because of that, it is used to help children during teething in Russia. Well, you may be an adult, but you can try it too if you suffer from mild toothache.

Additionally, Birch Tree Juice also contains xylitol, a type of natural sugar that is known to prevent cavities and reduce bacteria transmission. Therefore, regularly drinking Birch Tree Juice may result in fewer cavities and better-smelling mouth. If you hate visiting your dentist frequently, you may try drinking this instead.

It is rumoured that Russian and Ukrainian athletes are drinking Birch Tree Juice for hydration, as well as improving their endurance and performance. No mentions about which outstanding athletes from Russia rely on it as sports drink, but the All-Russian Research Institute of Physical Culture and Sport are said to have tested it on Olympic athletes.

Supposedly, it optimizes the functional state of the body during sport training and competition, accelerates recovery, and prevents metabolic disorders and cardiovascular diseases. For that reason, Birch Tree Juice becomes increasingly popular in recent years among health-conscious crowd and sport enthusiasts. Fashionable socialites also favor it because of its zero carb qualities.

Considering that it is as refreshing as lemonade, high in energy, rich in nutrients, and low in calories; who would dislike Birch Tree Juice!? This kind of practical use is one of the meaning of Birch Tree for Russian people . Birch trees are more than mere woods in the forest, but also sources of life.