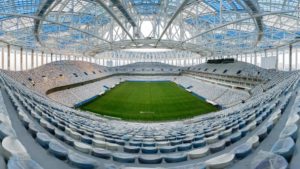 Thanks to World Cup 2018, Russia has received much of people attention from around the world. As the host, Russia has to welcome other countries which are participating in the game and football fans who come to Russia. Therefore, in this last 8 years since officially announced as the host of 2018 World Cup Russia has been very busy with the World Cup preparation.

Russia has renovated and built its infrastructure to welcome 2018 World Cup and to prove that Russia worth it. One of the things that will be the eyes of the world is stadium. Yes. We have seen it. All previous World Cups had been hold in such  great stadiums. So it is like a challenge for the host to provide world class stadiums and not let football lovers down.

In this case, Russia has come out with 12 stadiums in 11 different cities to hold the 2018 World Cup match. Among those 12 there are some stadiums which remains in the people’s heart. In this article, we have listed 5 favorite stadiums by visitor of World Cup 2018 in Russia.

This stadium has seven floors with the height of 79 metres. It is also equipped with a retractable roof and a sliding pitch which make it possible to host of any type of event. Saint Petersburg stadium is one of modern stadiums with modern technology.

Located in the tip of Krestovsky island which surrounded on three sides by Baltic sea makes Saint Petersburg has a lovely view. Besides, there are various sport facilities and the pleasant Maritime Victory Park. Then, Many reasonable restaurants mostly on the southern shore.

Saint Petersburg stadium is home to Zenit St. Petersburg. So, it’s also called Zenit Arena. It has the capacity of 68.000 for the 2018 World Cup. Before the World cup, the stadium has also hosted the Opening Match and Final of the 2017 FIFA Confederation Cup.

Kazan Arena is located at about 6 kilometres from central Kazan, Russia and becomes Kazam’s main football stadium. This stadium is considered young and modern since it was built recently in 2013. However, It has hosted some important events such as the 2013 summer universiade and 2017 FIFA Confederation Cup. Besides, It also hosted the 2015 World Aquatics Championship and The 16th FINA World Championship. And this year, it hosted six matches in the 2018 World Cup. Some people said that this stadium is a nightmare for three past champions, Germany, Argentina and Brazil. It is because they had lost and been eliminated from this tournament in this stadium. Inspite of that nightmare, Kazan Arena still becomes 0ne of 5 favorite stadium by Visitor in the World Cup 2018 in Russia. Why is that? Well, Of course It is because its awesome building design and features.

Kazan Arena was designed by experienced architect, Populous. It was built in three years. However, the result doesn’t say so. Kazan Arena stands with its amazing architecture. It resembles an upside-down sombrero beautifully. Some said that it is like waterlily from the air because it was constructed on the banks of Kazanka River. Besides, It also has a massive HD screen on its exterior. No wonder, Kazan Arena is called biggest HD screen stadium in the world.

Volgograd Arena is situated on the banks of Volga River, at the foot of the Mamayev Kurgan war memorial. This stadium was built for serving the 2018 World Cup as one of the playing venues. It is one of the most awaited stadium. It is because Volgograd stands on the former city main stadium which was declined and outdated. Now that outdated stadium is replaced with a modern football stadium that can hold up to 45.000 spectators. During the 2018 World Cup, Volgograd has hosted four first round group games. After the event ends, It will be home for FC Rotor, a popular team in Russia.

Like the other World Cup stadiums, Volgograd Arena has also an amazing design. It has an inverted facade with expanding web that makes it beautiful especially when reflected off the Volga River. Its blue and white roof adds its beauty. Then the seating takes the form of a wave.However, Volgograd Arena’s design is not the one thing that makes it visitor’s favorite satdium. There is another thing that is its location. The location of Volgograd Arena is in the heart of the city so it will be so nice for the visitors to walk  around.

The design of Nizhny Novgorod stadium is mesmerizing. That is why it has a special place in the heart of the spectators. It’s said that the design is inspired by aspect of nature, water and wind, in the Volga region. Then the building resembles an antique roman temple but in modern way with a semi-transparent facade. The blue and white patterned seats are gorgeous which are tilted so it can present an excelent view.

This is the last of our 5 favorite stadiums by visitor of World Cup 2018 in Russia, Luzhniki Stadium. This stadium is the grand stadium of Russia’s World Cup which hostedmany matches included the tournament opener and final. it’s built in 1956 to host first nationwide summer spartakiad. Since then it has hosted many significant events such as the 1980 Summer Olimpics, World Championship in ice hockey and many more. This year, It hosted 2018 World Cup. It’s said this staidum has hosted more than 3000 matches.

Luzhniki stadium is located in a bend of the Moskva River on the Luzhniki sport complex. This stadium is a historical building in Moscow. So It needs renovation to welcome the 2018 World Cup. However, there are still aspects that need to be preserved. One of the is its facade which has become the Moscow’s landmark. The significant changes are happened inside the stadium. There is no athletic track like it used to be. Then, the stands become rectangular and are moved closer to the pitch. It adds two extra tiers. Its capacity is also increased from 78000 to 80000.

What makes Luzhniki stadium be visitors’ favorite stadium? Well, it is because its location which is on the most prestigious district and transport accesibility so the visitor can get easily to the stadium. Its features also make the visitors favorite this stadium, enoy the game like as a part of the game. It also has a huge media screen on the roof.