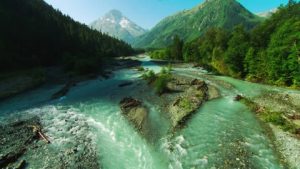 Russia has beautiful mountains, beaches, deserts, volcanoes, and glaciers, making it one of the most beautiful natural wonders countries in the world. However, due to inconsistent promotion, these natural beauty is frequently overlooked even by Russians.

Russia is so huge and almost intimidating. Even more, The fact about Russia are this country spans nine time zones, contains ¼ of the world’s fresh water, and its surface area is bigger than Pluto. Moreover, Russia’s nature is very impressive. It is absolutely stunning and yet underrated among people – both tourists and locals. People hardly ever get the chance to explore Russia thoroughly due to its size. If you ever have the chance to visit the world’s biggest country, here’s the ultimate list of 10 beautiful natural wonders in Russia.

Taiga or snow forest is mainly pines, spruces and larches tree. They are widely grown in Scandinavia, North America, and Russia. The reason why it is called snow forest because it is mostly covered with snow throughout the whole year. The characteristic of typical fairy-tale-looking landscapes. Russian taiga is home of various greenery and huge animals, fast-changing climates, and the friendly ethnic group that can show you how to live in a very amazing place.

A UNESCO World Heritage Site located on the northern and southern slopes of the Western Caucasus. It’s not far from Sochi. The reserve is a part of the Caucasus Mountains, the famous Mt. Elbrus and Mt. Kazbek. Two mountains that always covers in snow all year long. As Europe’s highest peak, Elbrus attract many hikers and mountaineers from all over the world. Consequently, many travelers come and enjoy this natural wonder in Russia.

Lake Teletskoye is the largest in Altai and it is surrounded by beautiful taiga. There are numerous caves made from limestone, marble, and dolomite. This place has an abundance of wonders perfect for a travel destination.

Lake Baikal is the deepest, weirdest, biggest, and most diverse lake on Earth. The facts about Lake Baikal will amaze anyone visits this place. The crystal clear water calls people to plunge into its waters. Some popular spots here include the beaches of Olkhon Island, Sandy Bay and the Small Sea, where people can explore and dive. The river broke through the rocks and become a giant wind tunnel. The surrounding area is the habitat of some of Russia exotic animals and various rare plants. A relaxing vacation by the Balkan will be sitting on the shore, fishing, going dog sledding and watching Baikal seal swimming in their natural habitat.

The natural wonders in north-western spurs of the Eastern Sayan Mountains, near the border of the Central Siberian Plateau. The reserve tries to preserve the nature around the picturesque residual outcrops, also known as pillars. Stolby Nature Reserve is a popular travel destination for rock climbing enthusiasts. The nature reserve is easy to reach and has an amazing collection of rocks.

Lake Onega is the second largest freshwater lake in the whole of Europe. The lake has a hugely diverse collection of fish, including sturgeon, salmon, trout, whitefish, catfish, eel and others.  Lake Onega is increasingly becoming popular with visitors coming for fishing, boating, and sailing. Every year Russian sailing regatta and Wooden Boat Festival are held around the lake and attract many tourists.

The swamp lies in the western part Siberia, between the Irtysh and Ob rivers. Therefore, it is the largest swamps in the world. It serves as a major source of fresh water for entire the region. Though the swamps are mostly shallow, and easily walk upon. Not many tourists familiar with this place. The area is home for rare species of animal and bird. It is not your typical tourist destination, but it is quite unique and has many appeals to certain tourist.

Lena Pillars is a natural park on the banks of the Lena River in Yakutia’s Khangalassky region. The pillars are vertically elongated rocks stretches for many kilometers. It piled along the bank of the river and the deep valley of the Prilenskoye Plateau. Scientists believe that the rocks formation dated back about 540-560 million years ago. This beautiful natural wonder always amazes any photographers.

The Valley of Geysers is one of the biggest geyser fields in the world, and the only Geyser in Eurasia. It is a part of the natural complex of volcanoes in Kamchatka. The valley forms a deep canyon of the Geyser river. Therefore it has numerous geyser outputs, hot springs, mud pots also waterfalls. The uniqueness of the place is the abnormal high biodiversity and high climate contrast in this territory.

Historically Krasnodarskiy Krai attracts spas, beaches also gastronomic lovers. The three most popular destinations in the area are coastal Sochi, Gelendzhik, and Anapa. it combines by the warm Azov Sea in the north and the Black Sea to the south. You can explore the sandy beaches of the Azov Sea and the rocky beaches of Black Sea. And then tourist can enjoy water sports, scuba diving, or simply sunbathe.

The Solovetsky Archipelago, or Solovki, is a beautiful natural island in the western part of the White Sea. It consists of six large islands and more than a hundred small islands. Solovki has genuine and picturesque coasts and a wide array of mixed forests across the lakes. It offers great scenery for any nature lover.

Russia is really home of various natural wonders. It is no suprise it attract many world nature lover. There are more amazing places in Russia that suitable for your travel destination beside the top 11 places we listed above. You can come to Russia and discover it by yourself.