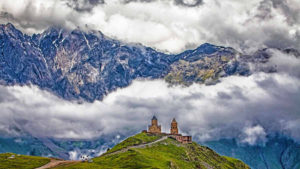 These are the top 7 things worth to know about Caucasus Mountains:

1. The Caucasus Mountains Are Very Old

It is said that the Caucasus Mountains were formed around at the same time of the Alps’. The development and formation itself spanned over a long period of time, but began more than 25 million years ago. This ancient age of the mountains may even be the reason why Russian people still adopt Old Russian Cuisine as Part of Their Culture.

2. Its Namesake Is Unclear

Though the Caucasus Mountains began forming millions of years ago, it was only known as the Caucasus since around 497 B.C. This was when the first record of the name was found, written by Greek poet Aeschylus. Because the word “Caucasus” has been used for thousands of years, it’s difficult to pinpoint its exact meaning. However, many believe that it’s the Latinized version of the Greek word “Kaukasos”.

3. How The Mountains Were Formed

The Caucasian Mountains were formed mainly when the tectonic plates of the Arabian and Eurasian collided. As the collision took place, the rocks deposited became what we now know as the Greater Caucasus Mountains. The entire mountain region is prone to frequent and strong earthquakes because of this crustal activity.

4. Russia’s Conquest of the Caucasus

Many centuries back, the people of Caucasian used to attack Russian settlements, often attacking its people and homes. This eventually led to conflicts as the Russian leaders began to feel concerns. In the beginning, Caucasus was a trade route from Europe to Asia that was ruled by Persia and the Ottoman Empire. However, Russia seized control of the mountains until the south-western Caucasus was invaded by Turkey in 1921. Today, nearly 10% of Russian people resides in these mountains and neighboring areas.

5. An Array of Flora and Fauna

Considering the number of forests and lakes scattered around the Caucasus Mountains, its wide variation of animals and plants should not be a surprise. There are a lot of species of goats, including tur and bezoar, mouflon or wild sheep, antelopes known as chamois, wolves and even leopards. Other than that, you can also find a variety of bird species. This includes lammergeier, a type of bearded vulture, peregrine falcon, snowcock, goshawk and imperial eagle.

Meanwhile, there are more than 6,000 different types of plants in these mountains, with around 1,600 species that you can’t find elsewhere. However, many of these animal and plant species are threatened by human activities like illegal poaching and logging.

6. The Northern Contrasts the Southern Side

Yes, the Caucasus Mountains are essentially one vast mountain range. But it may come out as surprising to know that the northern side differs greatly from its southern area. The Russian side, which is in the north, is comprised of shale and contains tons of glaciers. It has more gradual slopes when compared to the abrupt rises of the southern side. This is also the side of Georgia, Azerbaijan and Armenia. Furthermore, the east and west sides of Caucasus are different too, considering that the Caspian Sea side is 10 times less wet than the Black Sea side. This is why the latter is a more popular hiking site among travelers and locals alike.

7. People Living In The Caucasus Mountains

More than fifty different peoples comprise the population of this mountain range. The numerous languages spoken by these residents fall into three categories: Indo-European, Caucasian and Altaic. Russians and Ukrainians make up over 80% of the Caucasus population, and they mostly speak Slavic languages of the Indo-European, which includes the Russian language. This is why Russian becomes the widely accepted form of communication between Caucasian men.

8. Traveling Around The Caucasus

In most areas of the Caucasus Mountains, locals like to get from one place to another using minibus and hired tax. Trains and planes are not a popular means of transportation, as these services can only be found in a few destinations. Meanwhile, Caucasians also like to use cable cars to travel around the mountains. The landscape here is absolutely beautiful, probably inspiring many foreigners by its charms. Much like the reasons why Famous Movies that Take Place in Russia were shot in the cultural country.

All in all, the Caucasus Mountains are a place of great renown and worldly wonders. After reading these things worth to know about Caucasus Mountains, are you convinced to add this paradise into you travel bucket list? While you are at it, you might as well give the neighboring country of Russia a visit. Before doing so, you can figure out when is the Best Time to Visit Russia and learn some Common Greetings in Russian. You should also know some of the Advantages of learning Russian as Indonesian.