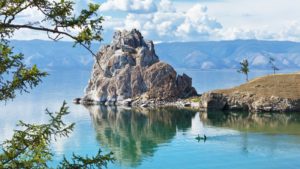 When you heard the word Siberia, it is identical with unrelenting cold and white snow falling all over the landscape. But, hidden in the middle of Siberia lies Lake Baikal with its crystal-clear water and green landscape surrounding it. The lake has are of 3.15 million aha that covers a big region of Siberia. Lake Baikal itself is the deepest lake on Earth consists of more than 20% of the world’s fresh water, with its depth reaching approximately 1,642 meters.

The lake known as the deepest and weirdest lake in the world with mysteries surrounding it. It has a lot of myths surrounding it and also thick cultural influence.

This lake is one of the clearest lakes in the world. When winter comes, the water transparency in open spaces can as much as 30-40 meters. But, during the summer season the water transparency in open spaces is only 5-8 meters. Another blessing for this lake is that it is rich in oxygen even in deep sections. Therefore, it has a great variety of floras and faunas living inside. And also that causes in differentiation of Lake Baikal with Lake Tanganyika and the Black Sea.

As the deepest and weirdest lake in the world, the lake has a lot of hidden and interesting facts lies beneath it. Some of them are the lake being the oldest one in the world, visible transparent ice, and myths surrounding the lake. The myths consist of dragon legends and also unexplained phenomenon happened on the lake.

1. The Oldest Lake in The World

Lake Baikal was formed as an ancient lowland with linear shape that are surrounded by mountain ranges. It is home to varieties of animals and plants. Some of those floras and faunas are even only exist in the lake and going extinct. It makes the lake a mysterious location to be researched and explored. The Lake itself is considered as the oldest lake approximately at 25 to 30 million years. Russian expansion happened in 1628 – 1658 into the Buryat area around Lake Baikal as part of the Russian conquest to Siberia. The conquest attempt was done first by following the Angara River upstream. Then after that, the attempt was done by moving south from the Lena River.

The lake has a famous name of “Galapagos of Russia”. The name comes from its age and isolation. For that reason it has produced one of the world’s richest and most unusual freshwater faunas, which is an amazing discovery for evolutionary science. It has also been declared by UNESCO as a world heritage site with its amazing features and landscapes. The lake itself, unlike most of freshwater lakes that disappeared and changed with silt overtime, can maintain its existence for over decades.

Lake Baikal has crystal-clear water in which it is considered as one of the most transparent freshwater lakes in the world. This is one of the interesting things about the lake as the weirdest and deepest lake in the world. In some part you can even see the bottom of the lake. This feature itself is one of the main attraction for tourists to come by and travel to the lake. With its fragile looks, tourists got a thrilling experience to walk on the surface of the ice. Tours are provided for all year round in this lake. But, tourists have to brave subzero temperatures in a wet suit.

The water temperature of this lake differs significantly depending on location, depth, and time of the year. When it is winter and spring, the surface will freeze for 4-5 months. From early January to May-June the entire lake surface is covered in ice. The average thickness of the ice is 0.5 meters to 1.4 meters. But, in some places that have hummocks it can reach more than 2 meters. But, the average surface temperature has risen by almost in the last 50 years. It results in a shorter time or period where the lake is fully covered by ice.

This phenomenon of transparent ice can actually be explained with scientific approach. When the wind is strong enough, it can blow snow from the Lake’s iced surface. When the surface is free from any snow above it, mineralization process can occurs. This process is the one responsible of turning ice to transparent.

The lake is located near China region, and therefore there is a little of influence in culture from China. One of the influencing culture is about the legend of the dragon kings. Most people in Asia believe in dragon as the most powerful creation on Earth. Some even have dragon as their cultural background, mainly on places like China, Korea and Vietnam. For each of the sea including East China Sea, Lake Baikal, South China Sea and Indiana Ocean, it is believed that a dragon lives inside. They were known as the ruler of the main directions of the world through the sea.

The dragons are mostly found in Buryat legends. In which they were named as Lusud Khan which means Water Dragon. Buryat people believe that the dragon resembles a giant sturgeon with armored plating on its back. It is a story that has been passed down for over generations and therefore keeps the legend alive. Not only do the dragons appear in stories, but also some drawings along the Baikal Cliffs also show the water dragon’s appearance. The drawings along the cliffs show a standing creature similar to the appearance of lizard with additional wicked claws. Some people believe it was the real appearance of the dragon kings.

For more myth and mysteries you can also see Baba Yaga – The Russian Folktale Witch, History and Creation of Matryoshka Nesting Dolls, and 6 Mysteries Surrounding Ural Mountains That You Need to Know.

On some photographs taken from space there is a thing called as “the mysterious circle”. The mysterious circle is a phenomenon of dark rings appearance. They appear with diameter reaching 7 kilometers that can easily be seen on the lake. The dark rings appear occasionally in spring and only in some places. It is said that there is a possibility of Lake Baikal containing gas volcanoes on the bottom of the lake in which the emitted warm rises to the surface and therefore creates such circles.

Another study and research shows that the dark rings are caused by anticyclonic eddies. And to add the cause is the structure of the lake itself. This conclusion taken from the fact the circles tend to appear in the same area. The exact place is close around Svyatoy Nos peninsula. This place is where anticyclonic eddies usually occur, with warm water in the center of it. The process of dark rings formation is as follows: First, the ice becomes thinner on Spring and then it is saturated with water. After that, it will sag a little. This results in appearance of the cracks and changes in the structure of the ice near the circle. Aside from the speculation and the recent studies, it is still one of the interesting facts of the lake that keeps you wondering.

That is all for information about Lake Baikal as the Deepest and Weirdest Lake in the world. There are many more things haven’t been discovered inside the lakes. And many more legends that talk about the creatures living inside the lake itself.