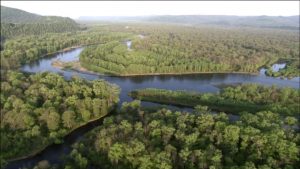 Being a country in the northernmost part of the Earth, Russia has tremendous natural wealth. There are snowy parts of Russia, others are grass-landed. This diversity causes Russia to be suitable for nature tourism. If you’ve ever seen a movie with a view of snow-capped mountains, that’s one of the features you’ll see in Russia. Besides the mountains, there are many natural attractions in Russia that you should not miss. Like lakes, grasslands, and much more. Here are 7 natural wonders in Russia that will stun you :

1. Valley of the Geysers

The location of Geyser Valley is on the Kamchatka. Geyser Valley is one of the largest fountain fields in the world, and the only one in Eurasia. UNESCO entered the site into a list of World Heritage Sites as part of the natural complex of volcanoes in Kamchatka. This valley is a deep canyon from the Geyser, which has a number of outputs of hot fountains, hot springs, mud pots and waterfalls. Biodiversity and abnormal high-contrast climates have been observed in this region. Since 1992, under an exclusive contract with Kronotsky Reserve, helicopter tours have been held, following a strict system of visiting rules to maintain the ecosystem’s equilibrium. The Geyser Valley is the one of the Seven Wonders of Russia in 2008.

Krasnodarskiy Krai has traditionally attracted the attention of spa lovers, beaches and gastronomic tours. The three of most popular destinations are coastal Sochi, Gelendzhik and Anapa. The Krasnodar region is bordered by the warm Azov Sea in the north and the Black Sea in the south. Beaches on the Azov Sea are sandy while the Black Sea coast is mostly gravel. Here you can enjoy water sports and scuba diving, or just sunbathe. The Krasnodar region is well-known domestically and internationally as the best provider of spa resorts and treatments in Russia. Its including famous mineral waters in Matsesta and mud near Sochi. This area is also a good holiday destination for active individuals. Its because the Krasnodar region is rich in various natural attractions including Akhun Mountain in Sochi, Agura waterfall, Vorontsov cave, and others.

The location of Solovki Island is in the western part of the White Sea, between the Karelian coast in Pomerania and the Onega Peninsula Summer. Its also near the Arctic Circle, and consist of six large, and more than one hundred small, islands. Solovki has native and beautiful beaches, coal deposits along the sea, and a variety of mixed forests scattered between lakes. For centuries, several people who inhabited the islands tied up separate parts of the road, connected them with lake channels, cleared straw fields and built dams. Big Solovetsky Island is famous among all members of the Solovetsky Islands. The island is the first and only assimilation island, and is the place where the famous village and Museum -Monastery Nusantara can be found.

The next 7 Natural Wonders In Russia That Will Stun You is Baikal Lake. Baikal Lake is the deepest lake in the world. Many Russians say that seeing the vast “Siberian sea” is a unique experience, and there is also a story about the monster Baikal, echoing the story of the Loch Ness monster. There are several hiking trails in this lake. You can swim in the lake during summer, even though the water is cold. The banks are scattered with resorts, hotels and camping sites, although many of them are Soviet times. Baikal lake is the one of most popular destinations during summer in Russia.

The northern part of Russia is very amazing, especially for tourists from Asia who rarely see hilly areas in the polar regions. There are only moss, bushes, grass and animals that are only able to pass the length of winter in this area. You will surely be grateful for the beauty of the white scenery that was created to be enjoyed. The north pole will make you feel winter everytime in Russia. So don’t forget to wear fashionable winter clothes like Russian do for amazing documentation.

Giving the name Volga has existed since the second century. This river is the largest river in the European region. In addition to the source of the main spring coming from Volgoverkovye which is quite abundant, the Volga river will increase its water intensity when entering March and April. The overflow of water comes from ice snow that melts due to seasonal changes. The abundance and abundance of water elements is the main attraction of this river.

Taiga earned the nickname of the lungs of the earth. Its because the Taiga is the largest area of the Russian federation. Taiga consists of an area of the largest park area in the world. This place have three zones, there are the south, north and center. Coniferous Forest covers most of this area. It makes plants and trees such as cypress, larch, pine, cedar and conifer are typical characteristics of this place. Various types of fauna also live freely in this region.