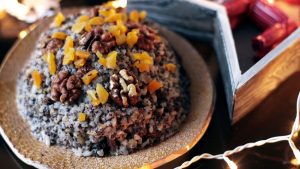 Russia is famous as a land of snow, which has extreme weather temperatures. Besides, it also has a long cultural history which is about over 1000 years. Before the Russian revolution of 1917 and the fall of the Romanov dynasty that had ruled the country for over 300 years, Russia was loyally Orthodox Christian country. However, under the power of Soviet, atheism became gradually came back since that day and the celebration of such religious days (such as New Year’s Eve and New Year’s Day) became eagerly waited as national secular holidays.

But not long after the collapse of the Soviet Union in 1991, the spirit of Russian Christmas which still remains from the past made a heart-warming return, and the religious spirit quickly resumed, with customs and traditions becoming cherished again. But different from other Christian country, Christmas Day in Russia is commonly celebrated a week after the New Year, to be exact it is usually held on January 7 rather than December 25, due to the Orthodox Christian observance of the Julian Calendar.

For most of us, Christmas dinner usually consists of a generously-sized roast turkey accompanied by mouth-watering cranberry sauce, crispy roast potatoes, deliciously steamed vegetables, spicy gingerbread biscuits, aromatic mince pies, sticky fruit puddings, etc. Here in Russia, dishes tend to be a little different. Below are 8 lists of  Most popular Russian Christmas recipes that you can try:

Kutia in Russia (also known as sochivo) is a sweet and fruity cereal. Belongs to a very special dish that is served on Christmas eve, Kutia or sochivo is the first-course Christmas Eve pudding of sorts is made with wheat berries, or other grains or legumes like rice, barley or beans, that are sweetened with honey and sometimes augmented with poppy seeds, dried fruits, and nuts. In Russian Orthodox tradition, it is usually served as the first-course Christmas Eve pudding to celebrate the end of fasting days.

A signature dish on any Russian Christmas dinner table, the Olivier Salad (also known as the Russian Salad) was first invented in the 1860s, by Chef Lucien Olivier. The recipe of this delicious salad is quite simple.

This Russian Vinaigrette Recipe with Beets and Sauerkraut is another “staple” of Russian/ Ukrainian cooking. Its also a very pretty & vibrant Russian salad.

The name sounds a little satanic, but these little beauties are an absolute genius of a dish and very easy to make. It is also known as Russian eggs. These are made of hard-boiled eggs which are filled with a little spicy stuffing of pickled cucumber. If you want your own creations, you just need to switch the stuffing into mushrooms, ham, sausages or fish rather than pickled cucumber.

This is a delicious and easy-to-bake. It is a must serve dish suitable on every traditional Russian table. These tasty buns, golden and crispy on the outside, soft and doughy on the inside are stuffed with a generous amount of savory meat (usually beef) or a vegetable filling consisting of mushrooms, mashed potatoes, onions and egg, or cabbage. While for you who prefer sweet taste, pirozhki can also be stuffed with sweet, fruit fillings made from apples, apricots, cherries, and much more.

In Russia, mushroom soup is a Christmas Eve staple. Mushrooms are delightful in all forms, but the extra-flavorsome taste of dried mushrooms is a whole other level of freshness. The soup is usually served with mini pirozhki or pelmeni dumplings, usually made with a non-butter dough and stuffed with a non-meat filling.

Russians do love caviar, and this is one of the most commonly enjoyed Christmas foods.. The making process is quite easy. Just follow a simple three-step recipe: slice bread, spread butter on it, cover the entire slice with caviar.

In Russia, priyaniki are a wonderfully delicious and spicy batch of festive, home-baked cookies with a beautifully stamped decoration, often filled with jam and traditionally served with either tea or the traditional Russian wintertime beverage known as sbiten – a hot, spicy and very sweet honey-based winter drink.