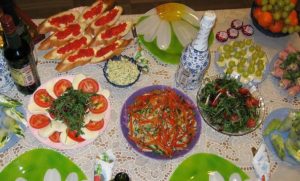 Do you think of visiting Russia at the New Year holiday moment? Then that’s right choice since the best time of festive to experience a long holiday approximately 4 weeks in a row (December 25th, followed by Gregorian New Year and Eastern Orthodox Christmas on January 7, and finally ends with Old New Year on January 14, a holiday that you can never find in any other countries, which is a combination of Christmas day, New Year’s and Winter holiday. The biggest and most important holiday for Russian is New Year’s Eve. It is much bigger and festive than the Christmas Eve.

Every major city in Russia has New Year festivals, concerts, fairs and other celebratory events. The streets are transformed with trees, lights and decorations. And every year at 23:55 pm the President addresses the nation. While on Christmas eve is always much smaller and would probably be celebrated with quite fewer festivals and with fewer attendants. The people also do not exchange presents on Christmas, but it is usually done on the New Years’ eve or on the 1st of January. So prepare yourself with this knowledge so you won’t be surprised by the Russian unique culture.

Becoming the most waited moments once in a year, Russian usually has long way of preparations. Starting from choosing the menu, they would decide the menu around 2-3 weeks before, then the women would also sew a special outfit with specific colors according to Chinese animal calendar. You are probably wondering, why would they make so much fuss?  Well, the reason is quite simple.  There is a strong belief in Russia, which literally says that: “how you will meet the New Year, is how you are going to spend it”.  So in order to have a good year, one must meet it well!  This would also relate to one’s house decoration, food, dress code, drinks and company.

Most importantly, the best thing about New Year’s Eve in Russia is the famous festive dinner.  I have compiled together some of our nation’s favourite dishes, appetizers, and drinks, which you are likely to encounter on any festive table in Russia.  So if you were wondering what are some of the most common traditional Russian dishes served on the New Year’s Eve, here are 12 Dishes on Russian table during The New Year’s Eve:

This belong to number one favourite dish that must be served by Russian families during New Year’s table. Yes, it is Olivier salad, also known as Russian salad for foreigners. Basic Soviet “Olivier” consists of boiled potatoes and carrots, sausage, hard-boiled eggs, pickles, green peas and dill. All of these ingredients then cut in small cubes and poured with mayonnaise. Since it’s a very famous salad, many Russian people think that it is not a proper New Year celebration if the Salad is not on the table. As your information, you can not underestimate the looks since it tastes way better since non-Russian have already proved it.

This salad is one of the most typical dishes served at the New Year’s Eve tables. It’s made by layering herring, onions, boiled and grated potato toppings with cooked and grated beetroot.  Usually, a thick layer of mayonnaise would be used between each topping. Russians also love to decorate it with some chopped walnuts or a thinly sliced boiled egg. A mixture of mayo and sour cream is another common topping.  The “Herring Under the Fur Coat” salad is simply delicious and it particularly goes well with a glass of sparkling wine.

The “Vinegret Salad” is another traditional, common dish, which you will encounter on nearly every festive Russian table.  It’s main ingredient – beetroot, would usually be mixed with boiled potatoes and carrots, gherkins cut into small slices, peas, and diced onions and sometimes sauerkraut.

Canapes are the little slices of bread (usually French baguette) typically topped with butter and red caviar.  Another popular topping is grated cheese mixed with garlic and mayo and often a slice of tomato.  These are the perfect finger food appetizers to get the party started.

It’s not called as Russian New Year’s Eve without these savoury snacks. This habit is already existed for a long time ago, and is still lasted until the recent generation. The New Year’s’ Eve there will usually be cucumber present, along with pickled tomatoes, cabbage and often mushrooms. It usually be served with onions, vinegar or sour cream.

6. A Selection of Cold Meats

It is very common to see sliced bacon, salami, and other cured meats on a plate, so guests can just take a slice of their favourite.  It’s usually served as a snack, especially when raising a glass to toast something.

Tangerines have been part of a traditional Russian New Year’s table setting since Soviet times.

Commonly known as “Seledka” in Russia, it is made from raw herrings, lightly salted, cut into thick chunks, accompanied by thin slices of white or red onion.  Some also season it with pepper and herbs and serve it with thin slices of lemon.

Along with the sliced meats and sliced herrings, there will usually be a variety of sliced cheese.

It would usually be served with mashed potatoes, though fried, baked and boiled potatoes are common as well.

Napoleon cake is common choice for the New Year’s Eve dinner in Russia.  It’s a light cake and is very similar to Mille Feuille.  It’s made of puff pastry and layers of cream.

Of course, vodka, cognac and the Soviet Champagne would always be present on any Russian table. It usually served straight out of the fridge and goes well with caviar and pickled vegetables. Yummy!