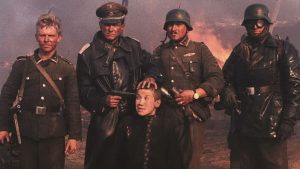 Russian has been well known for its long history, the transition period from decades has made the country stronger in terms of the defense and the stable mental for the society.

For short knowledge, the revolution begins with the Russian empire period, then it was developed through the Soviet period and the recent time is what we know now as Russian Republic.

Based from the historical background above, the development of filming industry in Russia is inspired by the condition of the past. The two things can not be separated in the way of story plot makers, in which the producer gives their creative idea through the movie. Since the easiest way to influence people is by convincing them with the great movies. This also makes the Russian producer eager to express themselves and t make recognition worldwide by their masterpieces to be remembered all times. Here are list of best Russian action movies of all time:

Directed by Sergei Eisenstein, Battleship Potemkin is a silent action movie about the rebel of Russian Battleship Potemkin crew against their officers. This belongs to one of the greatest masterpiece that will remain forever from the day its released until now and still lasted until whenever. The talents of director Eisenstein is shown here, he successfully applied the epic technique of mixing the viewer’s emotion, stir their feeling from sadness, anger, sentimental and hatred. Thus, it can only be done by genius kind of Eisenstein. One method that he used in the movie is associative editing, it can be seen at the first scene where the rotten meat full of wombs is used to symbolize the authority of the king and institutions. As the viewers see, it is something so disgusting and need to be thrown out, no matter how convincing it is said that the meat is still good.

Talking about the achievement, Battleship Potemkin has received great reviews from many awards. One of the awards is from the Brussels World’s Fair in 1958 as the greatest film of all time. No wonder if the director hard work is considered the greatest since many people worldwide paid many attention to every detailed of movie aspect.

Being the only Soviet movie which gets great winning the Palme d’Or at the Cannes Film festival in 1958, Cranes are Flying is the work arts of Georgian-Soviet director Mikhail Kalatozov. He is well known for creating great movies based on the war background happened in past Soviet times. So this movie is closely related to the past war and the difficulties that should be experienced by the lead character.

The story of the movie in general is portrayed about the cruelty of war along with the damage caused as the war after effect, and the psychological condition of the society which is hard to be undergone. The story focuses on the female character named Veronica who has the Fiancé named Boris. Here, it is told that she is patiently waiting for her lover who is joining the troops in World War II, without knowing that actually Boris has died in the military ground when saving the other soldier. We all know the hardships and struggles one should overcame to keep the faith in the middle of war condition. There is really no certainty of time when Boris would come home, also the guarantee whether he would stay alive or died as the war heroes. Thus, the director wants to convey that Veronica is the true kind-hearted woman and have full loyalty on her love. Although later at the ending of the movie she finally knows the truth, she can sadly accept the reality which is hard to believe.

Belong to the action-adventure movie genre, the movie which is directed by Vladimir Motyl. Bringing comedy, drama, action, good music along with the memorable quotes, this is actually one of the most popular action movies of all time. At first it was released, the movie had shaken the box office with over 50 million tickets sold.

Talking about the story, White Sun of Desert tell us the about the adventure of Russian Red Army soldiers named Fyodor Sukhov to find his way back home from Turkmenistan – Russian Asia- after fighting for years in the Russian Civil war. His only goal of going home is to meet his wife, the beautiful woman whom he loved much, named Katerina Matveyevna. The story begins with scene of nice and green rural image. When he finally wake up and realize that it is only a dream, in fact he is lost in the Desert, then accidentally find a man buried In the sand. Here he is offered to do a mission that is to guard 10 harems that was actually left by Abdulla. The story later continues with the fighting between Sukhov and the Abdulla with the gang.

For your information, this movie is considered as the ritual for good luck, because before do the research in outer space, Russian astronauts will always watch this movie. Just watch by yourself and see if you get the same good luck.

Directed by Elem Klimov, Come and See belong to the war action genres. Having inspired by war, the director have successfully creates a masterpiece. He makes tragic condition of war which is experienced by a young boy remains as bad memories for his entire life.

The story is about a boy named Flyora who has just came back from the World War II, he later find the unexpected series of event in which he finds all the houses empty and the death of his family members. This war and the consequences he should undergo have created the strong character as well as steady image.