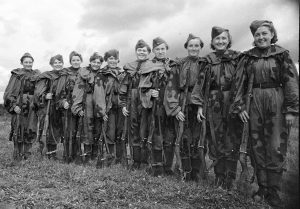 Russian women were involved in military life during the Soviet era. The regime started with a threat of World War I soon after the Russian Revolution happened. Russia was urgently in need of capable soldiers, so women were encouraged to take arms to defend their motherland. It was deemed necessary. Although the number of women who joined the military was significantly lower than men, it’s still pretty high. There’s an estimate of 1 million Russian women in the military.

During the early stage of Soviet Regime, a woman named Maria Bochkareva proposed to establish a battalion consist of women. The government agreed and thus the first female battalion of Red Army was formed. There were 2000 female aged between 13-25 enlisted. Their first battle was an offensive against German Forces in 1917. The battle was devastating as from those 2000 female soldiers, only 250 survived the three-month-long battle.

The majority role of Russian women in Soviet Military were medics. Women served as nurses, physicians, and doctors. They stood ready at the second line during a battle, retrieving injured soldiers. An important role in a war, there were hundreds of thousands of female medics in the Soviet Army. They care for the wounded, take care of soldiers health, and help identify fallen bodies.

Being a medic in a war is as dangerous as being a soldier. Soviet medics often carried rifles or other weapons when retrieving injured soldiers from the firing ground. They had some basic training and educated with basic combat knowledge. Medics in the Soviet Military, many were volunteers from universities in Russia, especially from the medical faculties.

Women’s role as pilots in the Soviet Military is pioneered by Marina Raskova. She was the first woman to engage in combat piloting a warplane. She trained future pilots too, also the first women to do so. She helped initiated an all women airforce regiment. From pilots to engineer, all soldiers in this regiment were women.

Perhaps the most famous units of Russian air women are The Night Witches. The name is given by the German forces due to their deadly quiet tactics. The night whiches piloted a type of outdated plane called Polikarpov Po-2 which hard to be tracked. They took a role as night bombers. The old planes they piloted could fly quietly at night, giving them a chance to dropped bomb into enemy fronts without signs.

Russian women served as land forces were the bravest. They were sent to frontlines, along with many male soldiers. They involved in hand on hand combat with the enemy. In a land battle, there was plenty of role of Russian women in the Soviet Military. They could serve in frontlines, be a tank driver, or a machine gunner.

A guerilla soldier can take many roles. There are a number of Soviet women who join to be partisans. Women served as partisans in the Soviet military usually being tasked to infiltrate enemy territory. They spread news, convey messages, distributed weapons, and do spy missions.

Conveying information well is something important in a war. Some Russian women in Soviet Military stayed in the background, ensuring all the communication equipment running well. Women served as messengers, delivering important messages regarding the war effort. Some women took administrative roles, such as an officer or a secretary. They made sure everything runs well despite all the mess the war had created. They helped in organizing, bookkeeping, and documenting.

During the war, the role of snipers was crucial in the Soviet military. There were hundreds of thousands of snipers in the Red Army. Unlike other types of soldiers which require physical prowess, being a sniper mostly requires patience, accuracy, and deliberation. Those are traits that fit women well. Hence, female were encouraged to enlist. There were around 2,000 female snipers in Soviet military during the world war II. Among those number, 500 were survived the war.

Among celebrated female snipers are Natalya Kovshova and Mariya Polivanova. They became war heroines of the Soviet Union. They committed suicide in a battle to avoid being captured by German forces. Together, they have around 400 confirmed kills.

Soviet propaganda portrayed a special role for women in military service. According to the propaganda, older female soldiers were mothers, capable of motherly love and care, toward their battalion. Female mother soldiers encouraged their compatriot to make the camp clean and orderly.

The sisters were to keep the culture alive, ensuring the atmosphere to be a bit brighter in the time of war. Both mothers and sisters were portrayed as a heroine. They were pretty, brave, and tenacious. The military unit was like a big family. Together, female and male fought heroically defending their motherland against Nazi Germany.

After World War II ended in 1945 in what later celebrated as Victory Day, many women who had served in the military before were already returned to their families and homes. The number of female soldiers had decreased significantly. The increasing tension between the USA and Soviet Union post World War II made the Soviet government take an extra measure. Female were again encouraged to join the military.

Fortunately, the cold war lived up to its name. There was no actual open battle during this era. The cold war battle was a silent battle over explorations of space and technology. It’s also a diplomatic war to show who had greater influence in the world politics. WWI and WWII had already taken many victims, the world didn’t need another world war between the two superpowers.