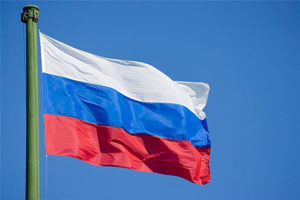 Russia has a national flag. The pattern of it is striped tetragon with arrangement of colors of white, blue and red. Before having a national flag, it has changed its flag several times in which at the end of the 17th century this flag is used for the first time.

So, it has a long history of Russian national flag so that it has a national a flag is like that. Read also Unique History of Volga River.

The Russian national flag has three colors; white on the top, blue in the middle and red on the buttom in which they are not official meaning. Because of it, there are many popular interpretations. The most famous interpretation is associated with European heraldic. In the era of European heraldic, the system of marks of distinction and symbols had existed since ancient times but the heraldry symbol was started during the feudal system in Western Europe. The prototype of emblems that placed decals (usually images of animals) on military armor, coins and city. There are several reasons why the emblems appear. One of them is decals that is used by army warriors to differ from each other in the battlefield.

After introducing emblems, the necessity of tournament distinction between participants was begun by special coloring. In the end of XII century, the consolidation of mastery of location, and land ownership were showed by special coloring. Each region of Russia was symbolized sequentially in red, white, and blue in which Russia comprised three historical regions; Velikaya Rus (Greater Russia, western part of Russia today), Belaya Rus (Belarus) and Malaya Rus (Little Russia, part of the current Ukrainian territory).

The history of Russian national flag is not only looked geographically but it is also looked in one of the figures; Peter the Great, tsar of Russia who (1682-1721), is also known as Pyotr I. He had ambitious plans to transform Russia be a modern state so that he built Russian navy and opened the access to sea in the beginning of the period because Russia did not has the access of ocean. He used Russian first ship with a flag that was colored white, blue and red to ford the rivers. In the case of taking a flag color, there is a statement which say that he took the color of flag from the Dutch flag, because the engineer of his ship was a Dutch who was facing a need for a dissimilar flag with his nationality to be put on the ship and he asked it to ground troops.

On the other hand, Vilinbakhov, historian and head of the royal council of Russia, said that Peter the Great had used the three color of white, blue and red as his flag before he went to Netherlands. Because of it, he concluded that the color of Russia flag was a Russian tradition that he used at that time.

They were changed by red flag with the symbols of hammers, sickles, and stars in which it became a symbol of Soviet power. Whereas, the white, blue, and red flag was used only by emigrants who opposed the communists. In the late 1980s and early 1990s, it became a symbol of democratic protest against the Soviet government, which was in their final years.

In 1991, the system of new Russian government was begun. The flag colors of white, blue, and red were reused and became the national flag of Russia because it had been used as national flag for long times. Whereas, the red flag of communists was hoisted by followers of communism, and the imperial flags was hoisted by monarchists. Read also 6 Facts of Winter Palace and Russian Revolution.